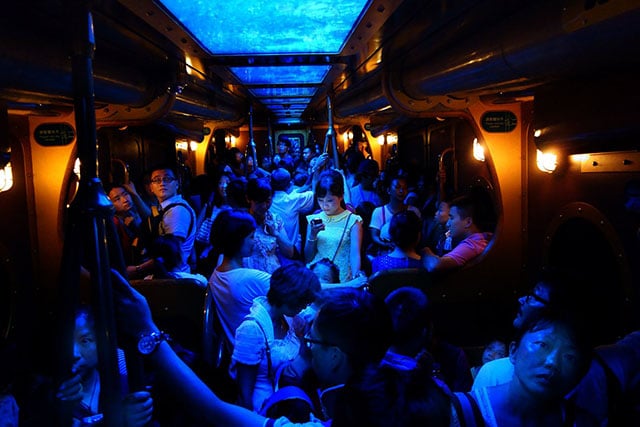 This photograph of a woman glued to her smartphone has been selected as the Grand Prize winner of the 2014 National Geographic Photography Contest. It was captured by photographer Brian Yen of Hong Kong.

In an interview with the magazine about his win, Yen reveals that he captured the photo during a 5 minute train ride at Hong Kong’s Ocean Park. When the train lights dimmed for an underwater effect, Yen noticed the woman glued to her phone in the middle of the packed train. The scene spoke to him:

I feel a certain contradiction when I look at the picture. On the one hand, I feel the liberating gift of technology. On the other hand, I feel people don’t even try to be neighborly anymore, because they don’t have to. The picture is also a reflective one. I also feel a bit guilty, more and more, that I’m just like that lady in the middle of the train, lost in her own world.

He snapped a photograph of the scene and titled the photo, “A Node Glows in the Dark.” Here’s his description:

In the last 10 years, mobile data, smart phones and social networks have forever changed our existence. Although this woman stood at the center of a jam packed train, but the warm glow from her phone tells the strangers around her that she’s not really here. She managed to slip away from here, for a short moment, she’s a node flickering on the social web, roaming the earth, free as a butterfly. Our existence is no longer stuck to the physical here, we’re free to run away, and run we will.

As part of the award, Yen has won $10,000 and a trip to the National Geographic headquarters for an exclusive photography seminar.

Here’s a behind-the-scenes video that offers a glimpse into how the judges decided on the winning photos:

9,289 photographs were submitted this year by photographers from 150 countries. You can find some of the other winning photographs over on the contest’s page.