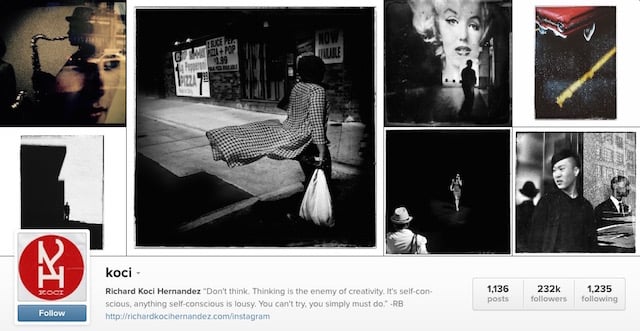 Well known Instagram user, street photographer, and Assistant Professor at UC Berkeley Richard Koci Hernandez has announced he will be deleting all of his photographs from the Facebook-owned photo-sharing service.

With almost a quarter of a million avid followers and over 1,100 posts, this announcement has come as quite a surprise to everyone. However, according to Hernandez, it’s been in the making for quite some time.

I’m hoping this will give me new motivation to make new images. Basically, I’d like to “clear-out the attic” and start with a clean slate.

It’s on this clean slate that he hopes to push his photography work forward, without the pressure he feels to sustain such a large following. Plus, as he tells TIME, “I don’t want to sound too pretentious but I’ve always felt that my photographs shouldn’t live forever.”

Despite the deletion of his Instagram photos, Hernandez says he has no intention of abandoning the social network. Instead, he will merely step away for a short period of time.

To find out more or get your hands on any of Hernandez’ Instagram work, head over to his website where you can order yourself a hand-signed print.

How to Shoot 8×10 Large Format Film: A Detailed Step-by-Step Walkthrough

Masai Warriors, Elephants and Giraffes All Made an Appearance at This Stunning Wedding in Kenya