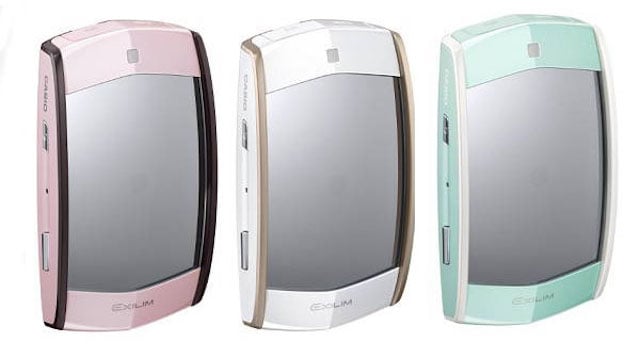 Casio has officially unveiled its latest point-and-shoot camera. Its official name is the Exilim MR1, but to the general public, it’s more likely to go by its street name, the ‘Kawaii Selfie by Mirror Cam.’

As the name suggests, this camera is designed with one thing in mind: selfies.

The 14-megapixel camera features a rather unusual form factor, as there is no visible lens element. Instead of being out there for the world to see, the unusually slow f/5 lens is hidden behind a two-way mirror of sorts that allows users to more perfectly frame the shot when they turn the camera on themselves.

To further refine its niche market, the MR1 doesn’t seem to be designed for men, considering it comes in only pink, white and an aqua-green of sorts.

The camera’s other specs are, un-surprisingly, subpar compared to what’s out there in the market today. It sports a 2.7-inch LCD screen, WiFi connectivity and a 700mAh battery that will get you 230 still images or 35-minutes worth of 1080p video per charge.

The concept is an… interesting one… to put it mildly. If you’re looking to pick one of these up for yourself or your selfie-obsessed friend, you can do so for the price of $330. For more info, click here to head over to Casio’s page for the new mirror cam.

Blackout Time-Lapse: This is What the London Skyline Would Look Like if You Could See the Milky Way