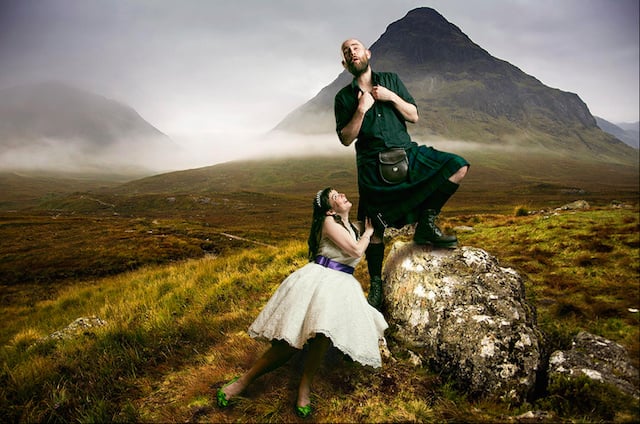 This is a story about a spur of the moment idea that evolved into something beyond my original intent. It started this time last year when my good friend, Puck, threw an additional wedding ceremony and party here in the States for those of us who were unable to make it to Edinburgh, Scotland for her main event. Puck and I had agreed that I’d be shooting wedding portraits for her as my gift.

So, as planned, after the ceremony I threw together a makeshift studio in the hotel conference room with my trusty Westcott 7’ parabolic and a couple of speedlights. My original intent was simply to get some beautifully lit portraits of the Puck and her hubby. But after meeting Skaffen (her husband) it was clear that he had a great sense of humor and wit; so when he mentioned that he was going to be donning his kilt for the party, my creative gears started firing in overdrive. I told him “I’m going to need to keep you from your reception for an additional ten minutes.”

To be honest, I’m not really sure how the idea came to me, but I’m pretty sure it was Skaffen’s mentioning his kilt that planted the idea of shooting them as if they were in the Scottish highlands filled. Think Conan the Barbarian movie poster. So I quickly threw two chairs together in front of my light, had Puck sit on the left chair, as I directed Skaffen to stand with one leg on her chair (so she could lovingly embrace his thigh—as if he were Conan, a la Frank Frazetta) while he propped his other leg up as if he were standing on a boulder in the Scottish Highlands. They both thought the Conan the Barbarian reference was great fun and it helped them get into the spirit. I banged out several frames—including some hilarious outtakes; I got the image I was after. 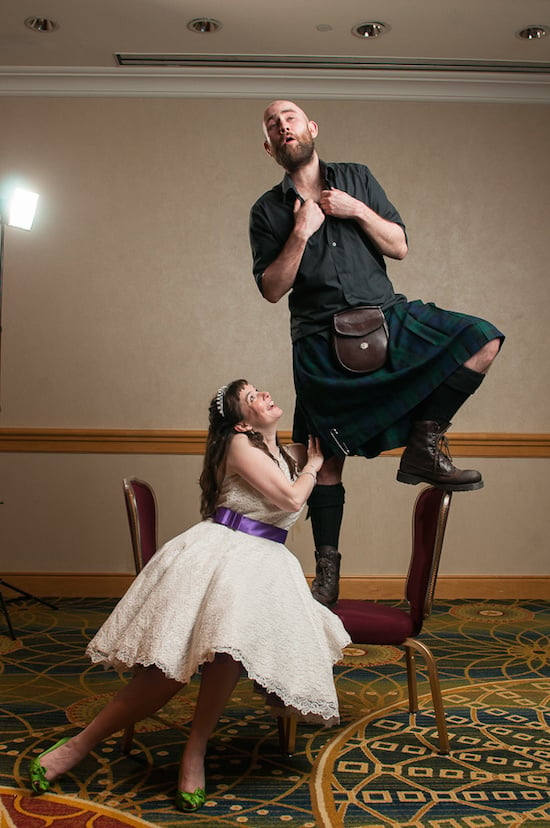 When I got home I started searching for images of the Scottish highlands and almost immediately found a gorgeous shot by fellow 500px member, Garry Roper, which looked like it had been tailor-made for compositing with my image.

I took a screen grab of his shot and created a quick comp to bring my idea to life. It was an incredible fit. But something wasn’t sitting well with me when I thought about how easy it would be to just forge ahead, make prints and send them to Puck and Skaffen. After all, I wasn’t making any money from Garry’s image. So no harm, no foul right? Perhaps, but where is the integrity in that?

As a photographer, I knew that the ethical thing to do was to contact Garry. I know I’d be furious if someone used one of my images without contacting me—even for a personal project. So I reached out to Garry, leaving a comment on the desired image, telling him that I would like to use his image for a non-commercial personal project ( a wedding gift) for my friends and attached the quick n dirty composite (shown above) to give him the gist of the concept. I also offered him a nominal fee for the usage of his image and ensured him proper attribution as well. 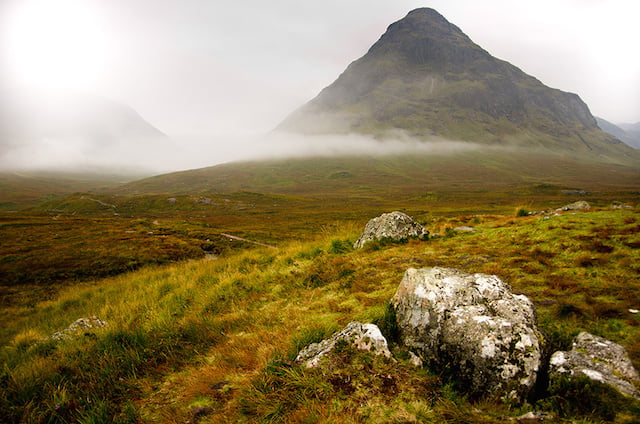 I wasn’t prepared for his response, but I was thrilled with it. He thought my idea was “brilliant fun” and asked if I’d like to use the RAW image file for the final retouched image… “consider it a wedding gift to your friends.” Wow. What an incredible, generous reply from a fellow photographer (who was a perfect stranger). Now I could create the composite to the level I really wanted, and with a clean conscience. I honestly think that Garry’s response was my reward for doing the ethical thing.

So I dug into the retouching, even got a helping hand from my friend and retouching artist extraordinaire, Justin Matkowksi, and voilá! The finished composite was born and promptly sent to my lab for production of 11“ x 14” prints. I made an extra set for Puck and Skaffen to hand-deliver to Garry as they took him out for thank-you pints at their local pub. Turns out that even though they live about 3 hours apart, that meeting has been a bit like herding cats. But it will come. Perhaps I’ll even be able to take Garry out for few pints myself. Thank you, sir.

About the author: Bryan Karl Lathrop is a Philly-based photographer whose passion for culture, 20+ years of graphic design experience, and love for his wife and two children all play a vital role in how he sees and captures the world. You can check out his website here, or follow him on Twitter and Facebook. This article originally appeared here.