Wildlife photographer Will Burrard-Lucas — a favorite of both meerkats and PetaPixel — recently captured this time-lapse of the ‘Great Migration’ of wildebeest in Northern Serengeti, Tanzania.

The scope and scale of this migration is hard to fathom, which is why Burrard-Lucas decided on time-lapse as the best possible way to capture it… a series of 10 or 20 stills just wouldn’t have done it justice.

“The scenes shown in this footage are among the most awe-inspiring I have ever witnessed,” he writes on his blog. “[It] was shot over five days in Northern Serengeti, Tanzania [and] shows the migrating wildebeest crossing the Mara River while moving south into Tanzania from Kenya.” 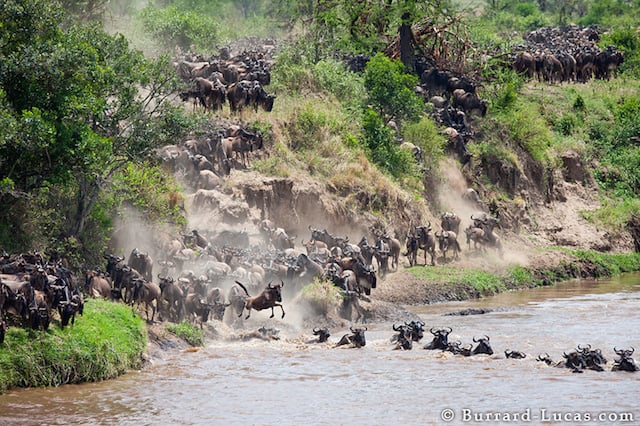 In all, Burrard-Lucas says the Serengeti Ecosystem supports some 1.5 million wildebeest, all of which must migrate around a 25,000 square mile area to find fresh grazing pastures. As he explains, “thirst, hunger, exhaustion, predation and the Mara River are just some of the challenges they must face,” during this migration.

The time-lapse, which captures the harrowing crossing of the Mara River in eye-opening fashion, is so impressive it was commended in the new time-lapse category of the Wildlife Photographer of the Year competition.

Image credits: Photograph by Will Burrard-Lucas and used with permission