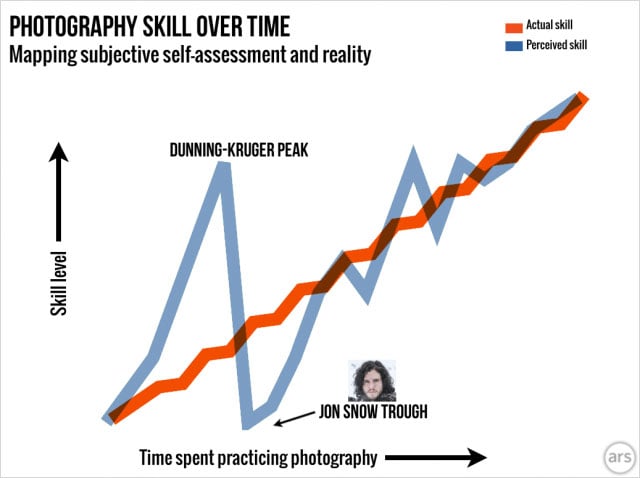 This humorous graphic was created by Lee Hutchinson over at Ars Technica in a recent article comparing the iPhone 6 Plus to a Canon DSLR. It suggests that people who are just starting out in photography commonly experience a period of delusion in which they suddenly think they are much greater at photography than they actually are.

Here’s how Hutchinson explains the graph:

The point labeled “Dunning-Kruger peak” is that surge of self-confidence one gets when one acquires some small amount of skill in a thing and, emboldened by that skill, decides that they are awesome at that thing. However, repeated use of the skill typically disabuses one of that illusion […] Once you’re across the peak, reality settles in, and you realize that the things you don’t know massively outweigh the things you’ve learned […]

Only with a lot of time and effort can you realistically self-assess your skill.

The name of the peak refers to the Dunning–Kruger effect, coined by a pair of researchers at Cornell University in 1999.

However, if given more training in what they’re bad at, those same people will recognize how incompetent they were (this is where people fall from the “Dunning-Kruger Peak”).

Once people become skilled at a particular thing, things actually get flipped: people who are actually good at things tend to underestimate their own skill compared to the grossly inflated claims made by unskilled people.

The solution to avoiding both sides of this effect: don’t worry too much about how you think you stack up next to photographers around you. Simply focus on improving your skills.

Newly Developed Lithium-ion Batteries Have Lifespan of Over 20 Years