The camera never moves, the interval never changes, there’s no crazy ‘flow-motion’ skills involved and what is captured isn’t a picturesque landscape… and yet, this time-lapse gabbed us and wouldn’t let go.

What’s captured in this three-and-a-half-minute time-lapse is an Amish barn raising… about a month of construction done in all of 10 hours. But more than that, it’s the power of team work.

Shot between the hours of 7am and 5pm (with a lunch break in the middle), YouTube user Penny Miller‘s husband set up his 60D to take a picture every 20 seconds. In all, he captured 1600 images, which he then converted into this testament to Amish barn prowess.

And prowess it is, according to Eric Mason, a commenter on YouTube who has worked construction his whole life, what you see happen in 10 hours above “would take a month if done commercially.” 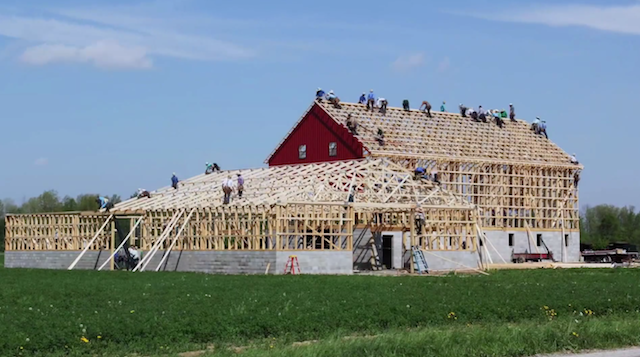 It’s worth noting, as Miller did in the comments, that they got permission to shoot this. The Amish, as a peoples, apparently do not like having pictures taken of them (or even, for that matter, drawings), and so the Millers were considerate.

“People should be respectful of others’ beliefs,” writes Miller in response to the commenter who brought this up, and we couldn’t agree more.

Check out the video at the top to see the captivating power of community for yourself.