It took a week of sleepless nights and a whole lot of Red Bull and 5-Hour Energy shots, but the duo of photographers behind Tree Speed Photo managed to get through it in order to capture this, dare we say ‘epic,’ motion time-lapse in Death Valley.

Dubbed Ghosts of Death Valley, the 4K time-lapse was shot from inside abandoned cars, train cars and buildings, the camera occasionally turning on their own motion gear to add a special meta touch.

The final product will make you want to pack up your stuff, rent what you don’t have, and head to Nevada for a quality experimentation with time-lapse photography and legal stimulants. 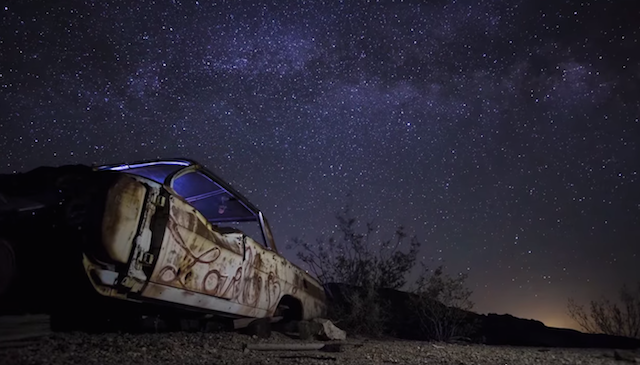 Check out the video at the top to see what all this gear and a week of sleep deprivation yielded, and then head over to the Tree Speed Photo website for some awesome behind the scenes shots.

Oh, and if your excuse for not attempting something like this is that you’re not near anything as picturesque as Death Valley, keep in mind that the Tree Speed Photo team is from Omaha, NE. They just make sure trips like this happen.