There are many ways to almost destroy your GoPro trying to capture viral footage — jumping off cliffs, jumping a mountain bike across a cliff… pretty much anything with a cliff will work — but this is the first time we’ve run across someone almost destroying their action cam by boiling it. All to give you an underwater view of an egg being poached.

Created by MakeSushi1 of YouTube channel How To Make Sushi Japanese Food Recipes, the video he risked his precious GoPro to capture did end up going viral… but it’s not your standard GoPro vid. Well, unless you consider creations like the “inside of a dishwasher” video standard action cam fare. 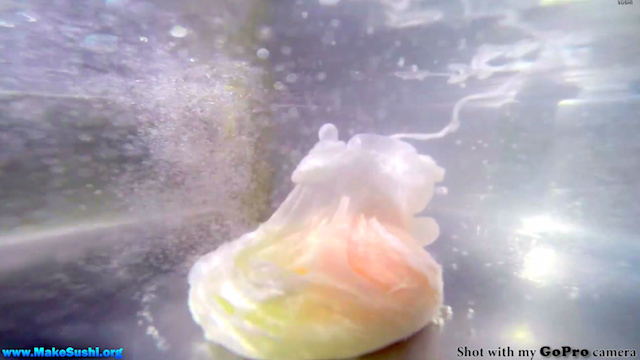 In the end he captured 25 seconds of video footage, but not without almost destroying his camera:

I placed the GoPro in the standard underwater case it comes with and when the air inside the case got too hot it expanded causing the case to fracture creating a leak, this was towards the end so as soon as it happened I pulled it out before much water could get in, anyway when I took it out the case the LCD screen was blacked out and the camera was very hot and unresponsive… honestly thought I broke it, once it cooled down though it started to work again and to my surprise it now works fine and saved the video footage!

Check out the video at the top to see the somewhat mesmerizing dance of the poached egg, and then go grab your GoPro and figure out something mundane-yet-fascinating to shoot.