We’ve seen both night sky and 360º time-lapses before, but we hadn’t ever run across an amalgamation of the two until earlier this week when we received an email from photographer Vincent Brady.

Brady was experimenting with different tricks and techniques back in 2012 when the idea for the creation above hit him. “I was shooting 360 degree panoramas in the daytime and long exposures of the stars streaking in the sky at night,” writes Brady in a blog post about the project. “It suddenly became clear that the potential to combine the two techniques could be a trip!”

With that idea now firmly established in his mind, Brady started designing and creating a custom rig for the setup, but it wasn’t until January of 2013 when the final product was complete. Featuring a crossed-shaped platform, the rig holds 4 DSLRs, each with their own fisheye lens attached. 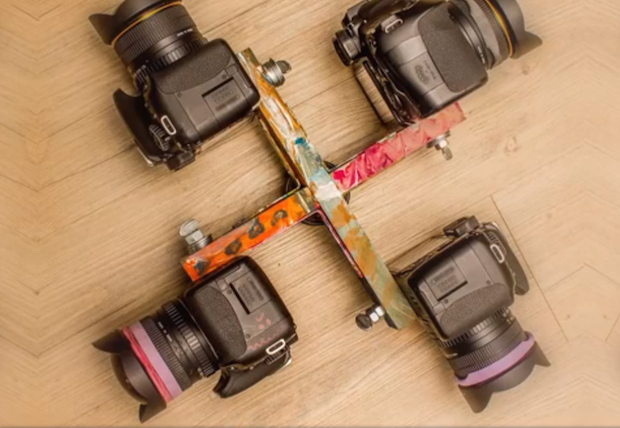 The actual process of shooting the time-lapse is done by setting each camera to capture non-stop 1-2 minute exposures simultaneously. Each scene is completed when the batteries die — usually between 2 and 3 hours, according to Brady. But the scouting and photographing of the scenes is only half the work. 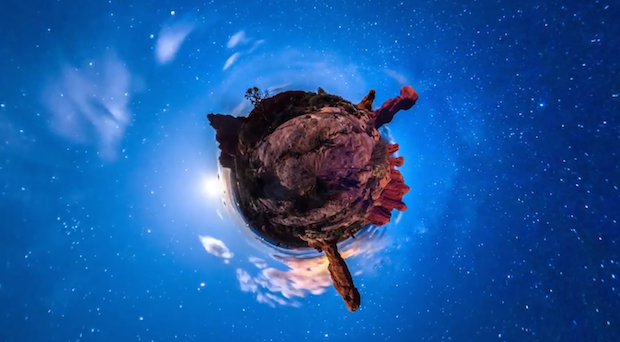 He then batch edits each individual image using the software StarStax in combination with a Photoshop script to better perfect the blending. And then, after all that, he manually stitches together the four images in PTGui Pro, using between 30 and 40 “control points” where two images need to be aligned with one another.

Finally, the last tweaks are made in Photoshop, after which he can combine the now-finished photographs into a trippy time-lapse like the one you see at the top. 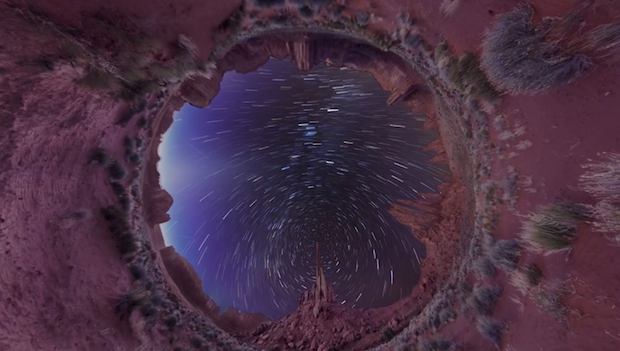 While this manual approach to processing each frame has its advantages in the form of quality, it’s not without cons. As you may notice while watching the footage, the fact that fewer frames are used does seem to lend a stuttered look to the final product.

The time-lapse comes in at four minutes and features a strong variety of locations. And even if the final product may seem a bit jerky or stuttered at times, the idea and amount of work it took to even capture and assemble the time-lapse is astounding.