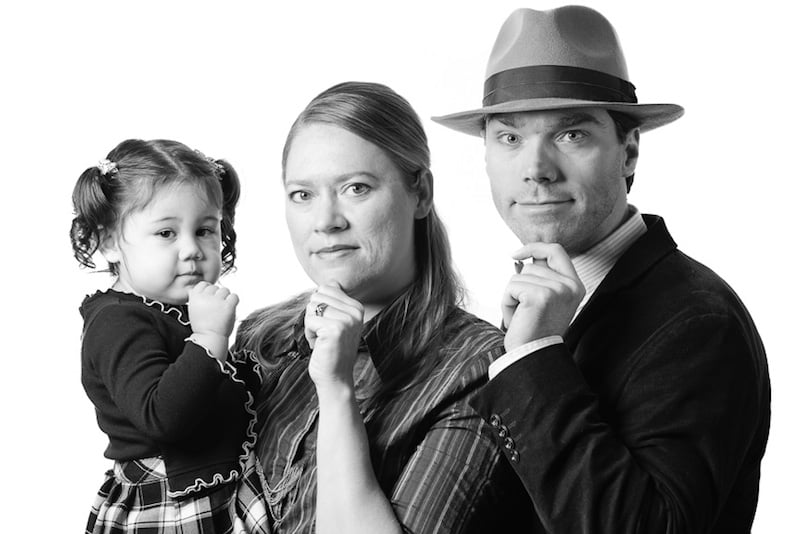 October 5th, 2011 was a Wednesday, and the Cache Valley Photographers were gathered at my studio for their weekly lunch time meeting to discuss Scott Kelby’s Guest Blog, and I remember the day well. The Guest Blogger was Jodi Cobb, who wrote about her project documenting modern slavery. Unfortunately, the group didn’t spend as much time discussing this as it deserved because it was also the day that Steve Jobs passed away. 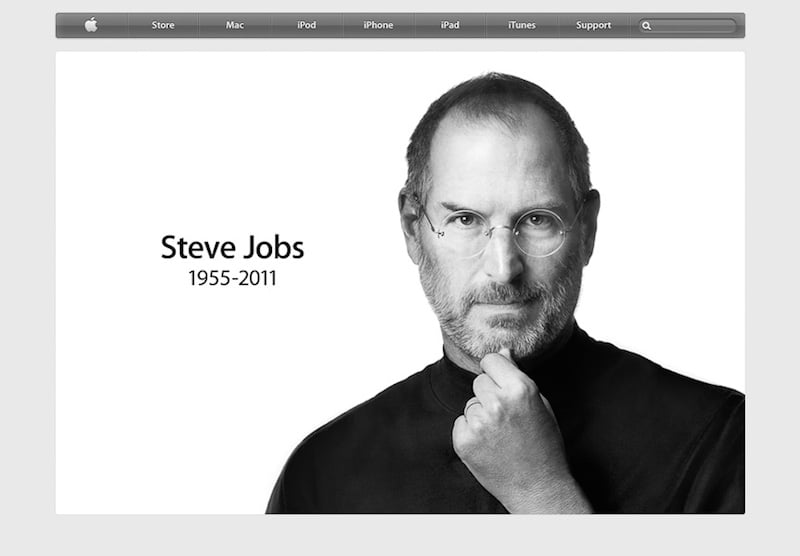 We did discuss this iconic image made by photographer Albert Watson. Watson’s work is varied and inspiring, and this photograph of Jobs has come to define an entire generation. It’s the cover of Steve Jobs’s Biography, it was the landing page of Apple.com for an entire month, and it hung billboard-sized at Apple’s campus. Few people have not seen this photograph. I’d like to share what I’ve learned from it, how it’s changed my life, and an idea for how it may be used to change others’ lives too.

We examined this picture, making suppositions about how it was lit, the lens used, etc. But no matter how much you dissect it, it’s clear that the subject is the object of the image, and that’s a lesson I’ve tried to keep in mind in all my portraiture since. This picture isn’t about Watson—an internationally renowned photographer—and his fancy lighting knowledge and camera-craft. It’s all about Steve. Viewing it, you’d never think, “Man that’s a cool lighting technique,” or, “Interesting background,” or, “I bet he used a full frame camera.” Watson masterfully removed everything from this image that might distract from Steve, including himself.

After lunch, my buddy Justin Wasden and I set out to recreate the image, and that was fun. Then someone else came into the studio, so we invited them to make a portrait, too. That evening I invited any and all to come in to make a portrait similar to Steve Jobs, and you know what? 100 people came. 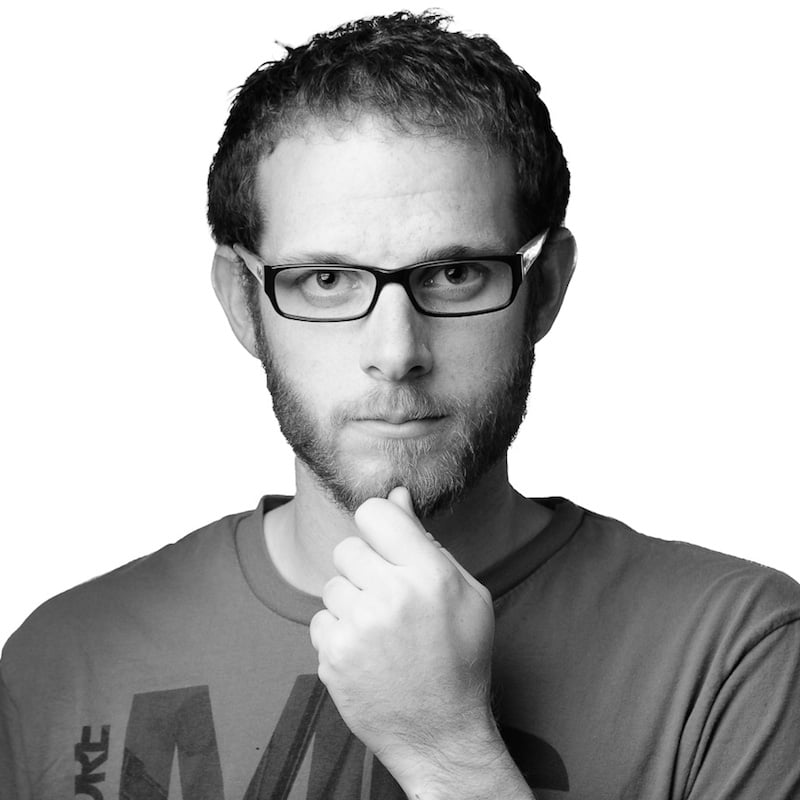 You gotta understand, this was a small farming town in Northern Utah, so it was pretty cool to get so many people involved. Some people called it a tribute portrait, some didn’t like Steve but couldn’t deny his impact on the world, and several were teachers who talked about how wonderful it had been to have computers in their classrooms (I had Apples in school, and earning a few minutes to play Oregon Trail was a great incentive in my elementary school classrooms). It was fascinating to hear so many stories and perspectives on the man.

Since then, I’ve made similar portraits for hundreds of people, and every time is marvelous. I’ve shot in my studio, in businesses, at conferences, and in casinos in Vegas. When people use this portrait for their profile image, they get a big bump in traffic and attention, which helps them build their businesses. Maybe you could get good results from making similar portraits, too. 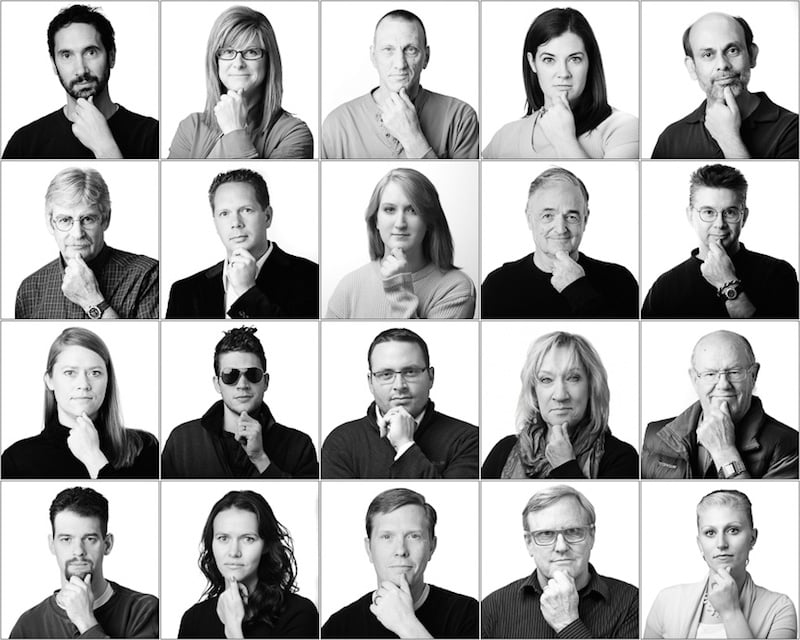 When you make these portraits, it’s essential to remember that you’re working with a person, and people are shy of being photographed. Being photographed is hard! I know many of you have said, “I bought the camera so I don’t have to be in front of it,” and if you have, you’re missing out on a great opportunity. Being photographed helps you to empathize, and that will make you a better person and a better portraitist. 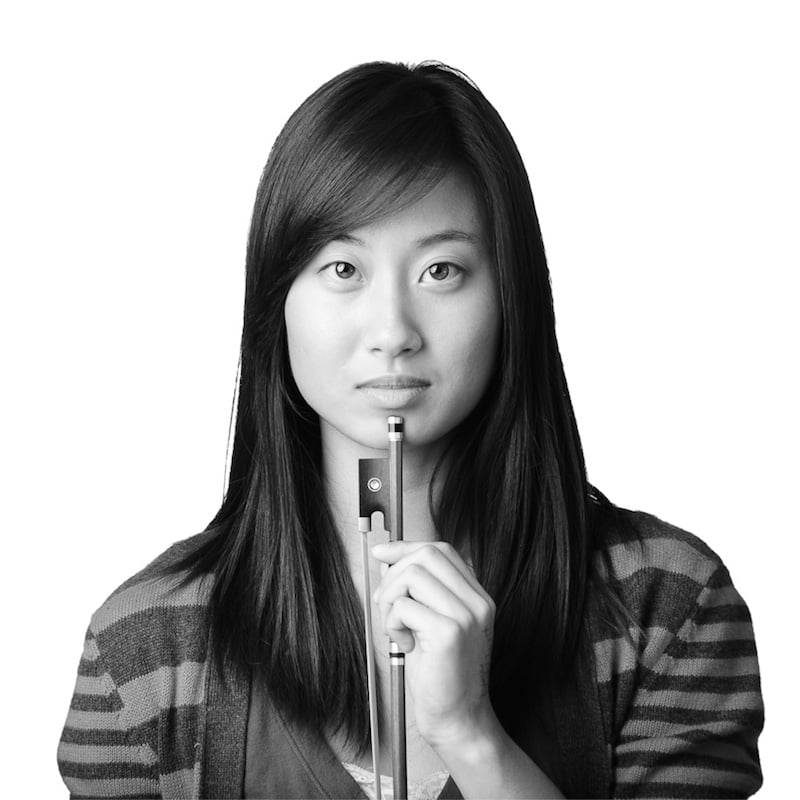 On the other hand, the great thing about this picture is that it gives people a chance to be a character, like an actor. It’s as if they are freed from their self-consciousness and embarrassment. They usually open up and we have fun. “Channeling Steve” is liberating. 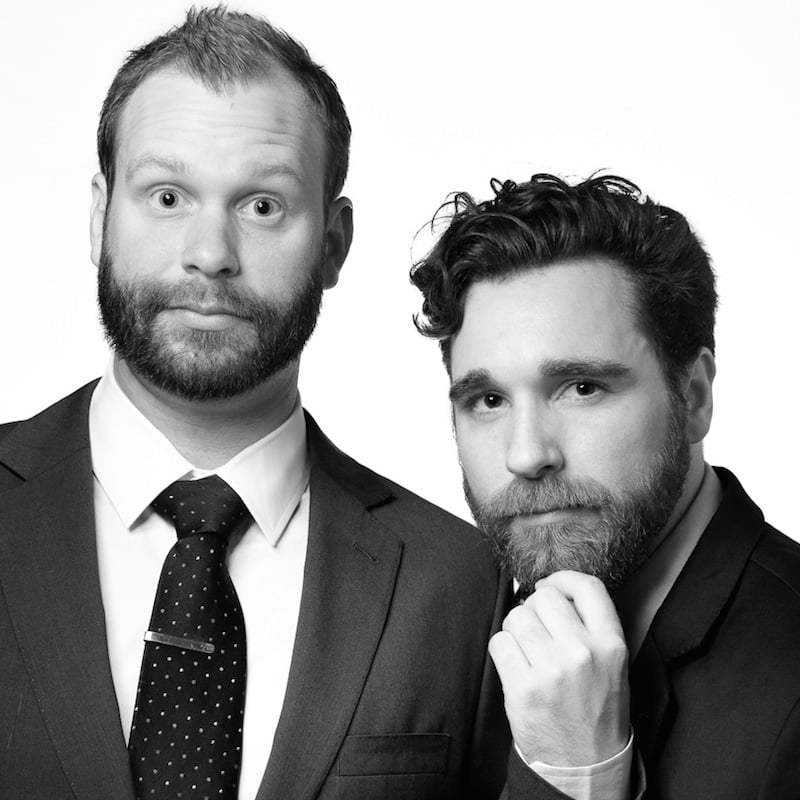 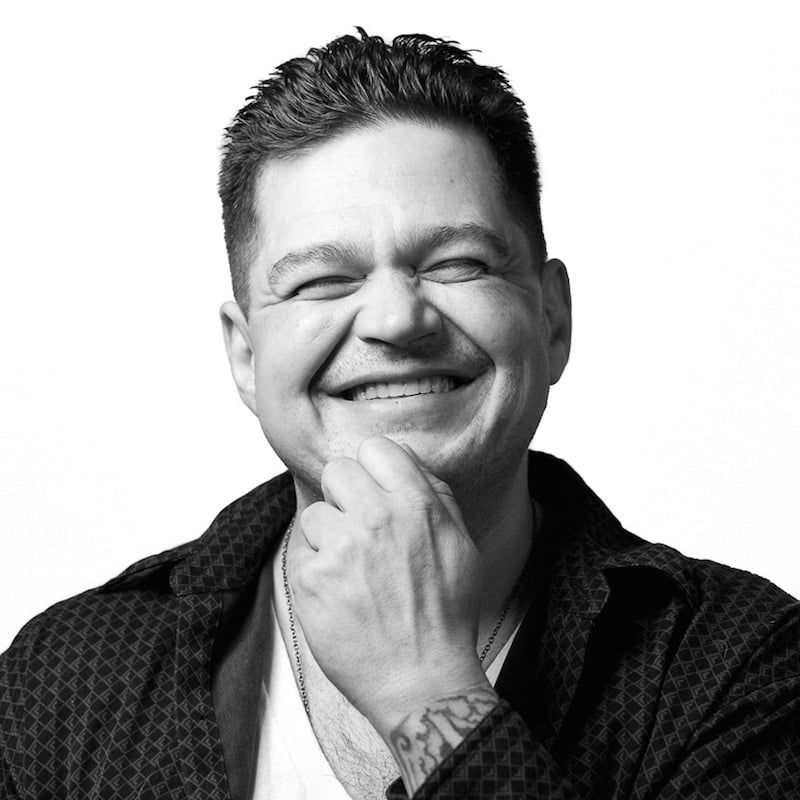 Still, you’ve got a responsibility to help people look their best in your portraits. How? Start by watching Peter Hurley’s guest post videos. Besides helping people hide their extra chins, you’ll also notice that Peter has his camera on par with the person’s face, not shooting from above. In this portrait, it’s important that your lens be positioned level with your subject’s nose. This helps your viewer engage with the portrait from a respectful position. Shooting from above, as we may have been taught to do, is a mistake in this case. If you do, the viewer is now looking down on the person, and that’s the wrong relationship. We ought to present people as equals. Use Peter’s tip of pushing the forehead toward the lens. You’ve got to help people look their best. It’s not a picture of a guy with his thumb on his chin; it’s a portrait of a person. 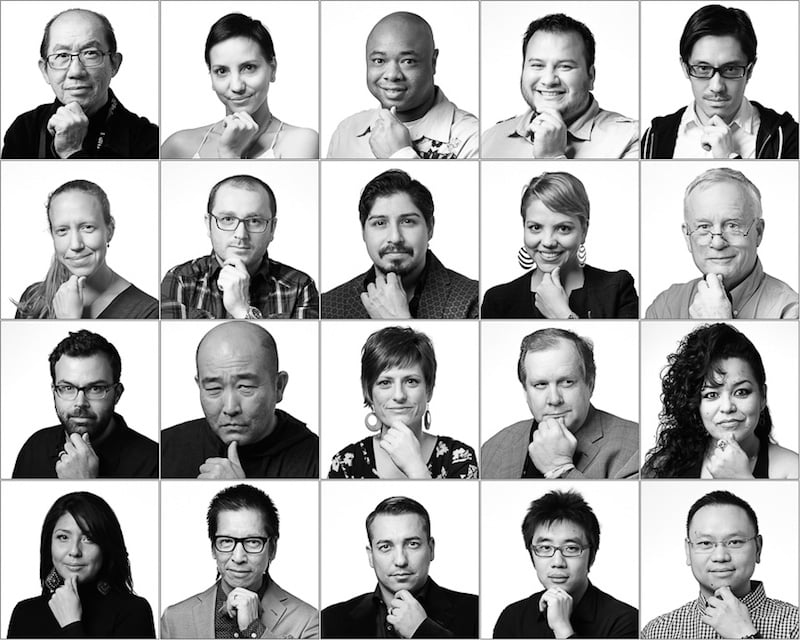 This video demonstrates a few key tips for making these portraits, including how to work with a person. You can see my setup with a beauty dish (though I often use a 26″ Rapid Box when I travel), and a 105mm lens. I strongly recommend you shoot these portraits at a minimum of 85mm.

Watson’s portrait of Steve Jobs is iconic, which means this simple portrait represents something larger and more important than the picture or the man alone. Maybe this single image recapitulates the last four decades. Maybe it represents the Baby Boomers. Maybe it represents prosperity and ingenuity and determination and capitalism and whatever else you think of when you consider one of the most influential men of the last 100 years. 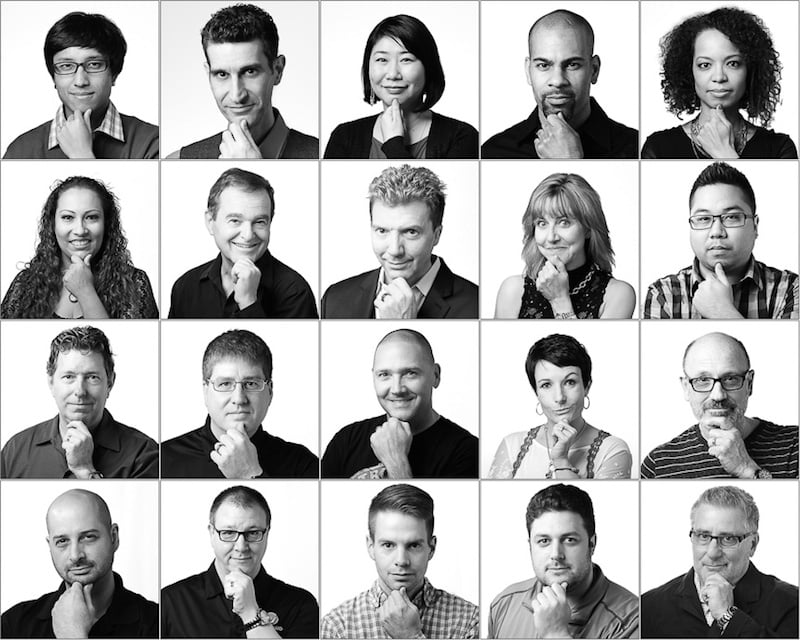 As photographers, our place is to make photographs that mean more than the sum of their parts. Beautiful sunsets are great, and pictures of babies are cute. The value of those pictures, though, is in the power they have to stir emotions and move people to action even when they’ve never been to that place, or met that child. Scott Bourne has named us the High Priests of Memory Protection, and that’s a serious responsibility and it requires us to act. I mentioned Jodi Cobb’s post earlier, which is just one example of powerful imagery moving people to action. 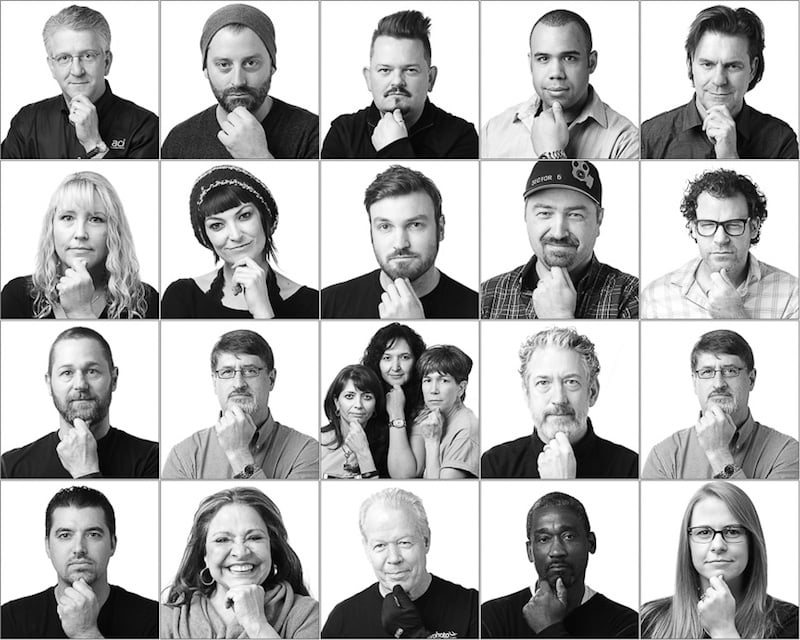 I’m trying to use this Steve Jobs Portrait Project to make photographs that mean something and move people to action. I’ve identified local organizations that do good things, and it seems that what they need most is more money to do more good things. We’re making Steve Jobs Portraits of the beneficiaries, and we’re making portraits of the benefactors who help make the good things happen. We invite people to a gallery reception (perhaps at a local business) where they may interact with the people of the organization, both the benefactors and the beneficiaries, and invite them to see how a little money can make a big impact. When we bring portraits and stories and people together, good things happen. 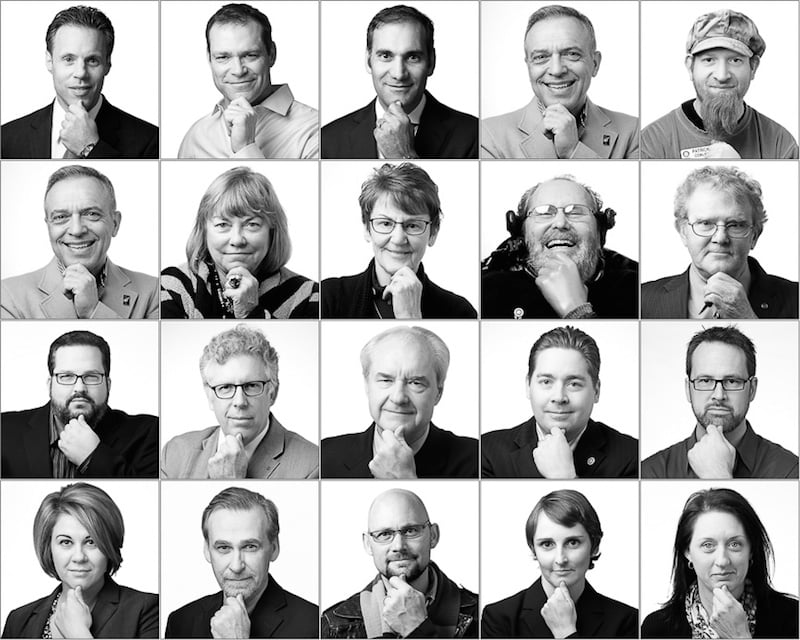 These portraits aren’t mine. It’s clearly a tribute to Watson’s work, and Steve Jobs used the same pose in portraits many years ago. I’m having a blast, however, affecting people’s lives with it. Maybe it’d be fun for you, too. Maybe you can even use it for something good. I’ve always thought that being asked to be a guest blogger on Scott Kelby’s blog would be the biggest honor, and that only the big league players were invited. Well, I know I’m still just a newbie, but it is an honor, and I’ve realized that the big leagues are full of people who give more than their share to others, and I can’t imagine better company to be in. Thank you, Scott and Brad, for establishing a giving culture and letting me be a part.

About the author: Levi Sim is a passionate full-time photographer who is crazy about learning and helping others better their work. You can see more of his work on Photofocus, or by following him on Twitter and Google+. He is also teaching at the Out Of Chicago Conference next week if you’d like to meet him in person. This article originally appeared here.