Many photographers love photo-themed T-Shirts — from camera brand-specific ones, to the cool offerings of Dodge & Burn, all the way to funny and maybe inappropriate shirts like the Camera Sutra. But, as Fro Knows Photo photographer Jared Polin learned recently, you might wanna leave the photo-themed T-Shirt at home when you visit your local amusement park.

Polin, who explains the entire encounter in his “Six Flags Rant” above, recently visited Six Flags amusement park… or rather tried to visit Six Flags. As soon as he got past the main gates, he was stopped by security and told he would have to change his I Shoot RAW photography-themed T-Shirt. 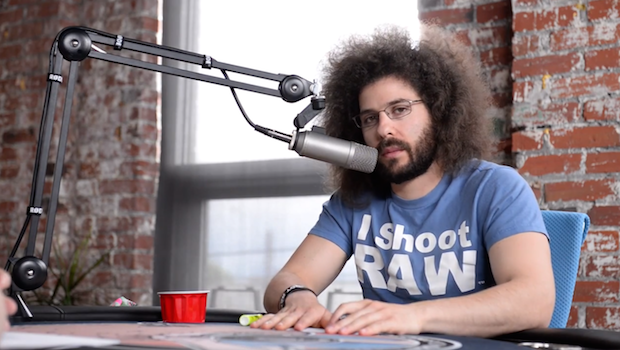 Fro caught the altercation on his smartphone (vertical video warning…), and in the video you can see him asking the guards to please explain what was so inappropriate about this shirt that, as he points out, has never caused him any grief in the past. He never got a straight answer, but apparently the potential double entendre of the “I Shoot RAW” shirt was more egregious than the “Size Matters” roller coaster shirt in the Six Flags gift shop.

You can see the incident for yourself and hear the full story from Polin by checking out the video above. In the end, he was able to stay at Six Flags, but was forced to buy another T-Shirt. In quintessential Fro Knows Photo style, he chose a very loud green and pink ‘VIP: Very Important Princess’ shirt as a substitute… hmmm… I wonder which shirt drew more attention…

Wedding Photos Use Wildfire as a Unique Backdrop and Go Viral