We’re all aware that photographing motor sports can be a dangerous task. Whether it’s on an oval track, a road course, or along country ravines, there’s always an inherent risk when a comparatively fragile human is photographing thousands of pounds of metal, carbon fiber, plastic and glass traveling at speeds far above what many of us have ever driven.

But as the above video goes to show, it’s not always the vehicle itself you have to worry about… the pieces that occasionally come off the vehicle can be just as dangerous.

Filmed by Norwegian cameraman Steffan Tronstad, the video shows him following a rally car around a turn in the road when, all of a sudden, the front-left tire pops off. “I was so focused on getting a good shot of the car,” writes Tronstad, “that I didn’t notice the wheel coming towards me at about 70 km/h.”

As you’ve probably already deduced, the tire, which he estimates was traveling at about 43mp/h, ran right into Tronstad. 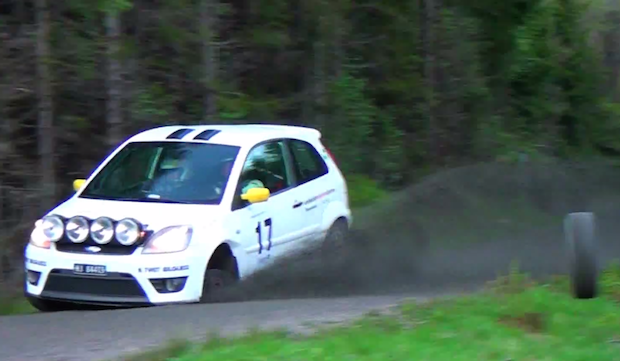 The good news is Tronstad walked away with only a few bruises. In fact, in a hilarious twist to the story, Tronstad revealed to VG News that he personally handed the rogue tire back to the driver of the offending vehicle.

Of course, it could have gone much much worse, which brings us to the lesson here: Always pay attention! And if you see something fly off a vehicle you’re photographing, you might wanna sacrifice the shot, duck and cover.

Spice Up Your Photography Experiments with Homemade Holograms