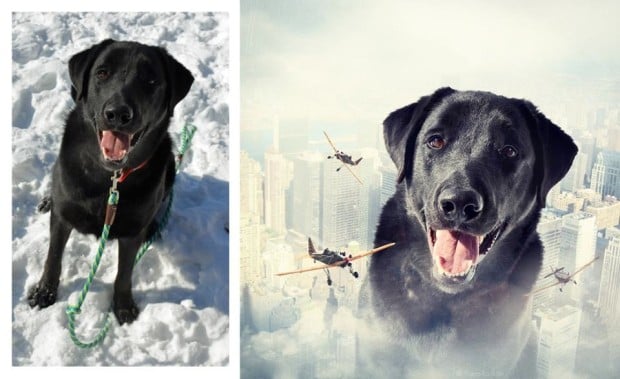 Budapest-based photographer Sarolta Bán is on a mission to shed a positive light on all shelter animals by creating images that will capture the eyes — and hearts — of anyone considering the pups for adoption.

But that’s not all. She doesn’t just create these images; once one of the dogs is adopted, she will send a print of the image to the new owners of her subject as a sort of reward. She explained the plight of shelter animals and the role of photography in helping them find a home when she spoke to the Huffington Post:

There is a [low chance] for shelter animals to get adopted because they get little visibility. That’s why it’s a really great idea that everybody can be a hero with a single iPhone if they take a picture of a shelter dog, and upload it to the Internet.

The conceptual images make for some interesting scenes with some adorable four-legged friends. Below are some of the images from Bán’s series:

If you’d like to see her entire project, you can head on over to her website by clicking here or check out the Facebook album of shelter animal photos she set up here.

Tutorial: How to Add Realistic Looking Sun Beams To Your Photographs in Post