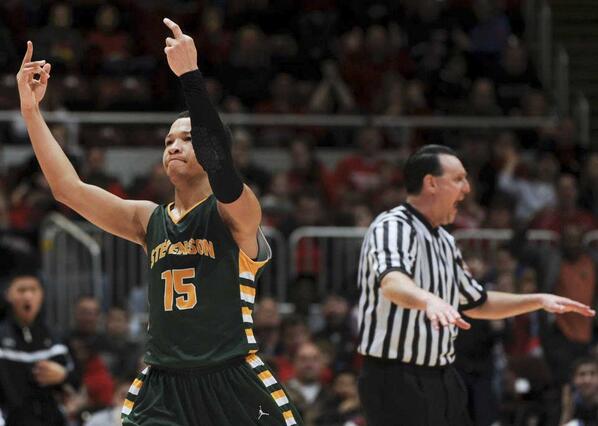 The photo above clearly shows star Stevenson High basketball player Jalen Brunson flipping off the crowd… or does it? The photo, which has caused an online firestorm and almost got the youngster suspended from a tournament, is being called into question after video and another photographer’s coverage show that it captured something that only existed for a fraction of a second — a moment that was gone before anyone present saw it.

Taken by Journal Star photographer Ron Johnson, this photo that seems to show an obviously obscene gesture captured something that another photojournalist from the game said happened for only “a fraction of a second.” What began as outrage about unsportsmanlike conduct has turned into a heated discussion on journalistic ethics.

Should Johnson have published the photo and captioned it “Jalen Brunson of Lincolnshire Stevenson makes a gesture to the Chicago Whitney Young crowd?” Opinions seem to be split half-and-half. Brunson, for one, denies having made the gesture intentionally, and the video seems to confirm that, at worst, he changed his mind quickly enough to make an intentional gesture unnoticeable:

Chicago Tribune photographer Scott Strazzante has come out in support of Brunson in a blog post in which he shares 20 raw images he shot at 10fps during the same moment. Of the 20 images, only three frames could be said to be showing Brunson flipping off the crowd directly. As Strazzante put it:

Seeing the play happen through my viewfinder, I was very confident that the gesture was not intentional. I felt the image could be misconstrued, so, I decided that it would be reckless of me to transmit the photo and take a chance that someone who didn’t see the play unfold would think that Jalen Brunson was flipping off the crowd or officials.

Even Brunson has come out to deny the allegations on Twitter:

It’s a complex situation that raises some interesting questions about photojournalistic ethics. Poynter’s Al Tompkins perhaps said it best when he wrote, “The Journal Star photo is accurate. It did happen. It was not manufactured. But accuracy does not equal truth. Accuracy plus context equals truth.”

Long after the context fades away the photograph will remain, which gives some credence to the seemingly paradoxical nature of questioning the veracity of a photograph that is completely, 100% unmanipulated.

Rumor: Sony Has a ‘Completely Different’ Medium Format Camera in the Works

We Animals: Powerful Photos Highlight the Plight of Animals in Captivity