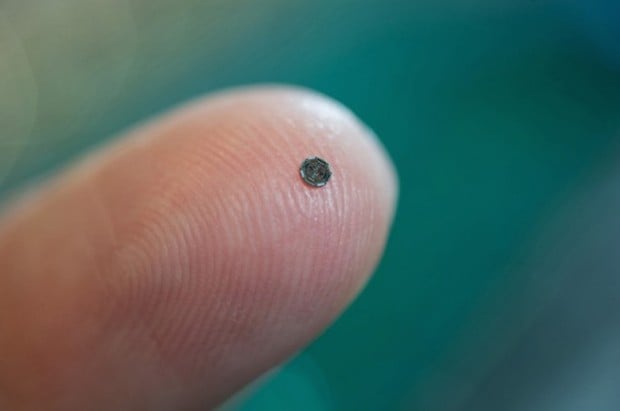 Ready for your close-up? Well, I hope so, because this little guy is going to get a closer look at you than any other sensor before it. Created by scientist F. Levent Degertekin, this 1.5mm donut-shaped camera is small enough to make itself comfortable inside your arteries with some help from a catheter.

Capable of capturing real-time, 3D and high definition at 60fps inside of us, the resulting images are created by a different method than your standard camera.

The tech makes use of a hundred tiny sensors placed underneath a super-thin film that flutters 0.00005 of a millimeter on top of this tiny computer chip. This fluttering film creates sound waves, which are then captured by the sensors, interpreted and transmitted to an external display via 13 gossamer cables.

Put more simply: what we have here is essentially an extremely tiny, high definition ultrasound machine that sets itself apart from the ultrasound technology we currently have by being so obscenely small. 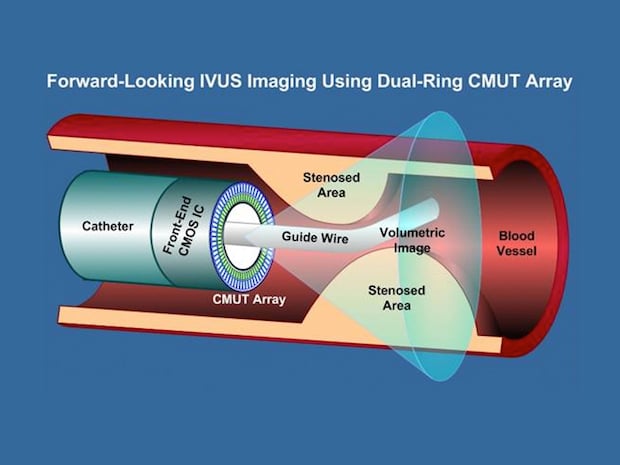 Rather than looking at our bodies from the outside — where there is plenty of interference in the form of organs, tissue and bones — this microscopic camera is capable of giving us an internal view, resulting in a much clearer, more precise image.

It’s said that this small piece of technology could be capable of replacing two people in the surgery room who, up until now, would capture cross-sections of the point of focus using a traditional ultrasound technique. The improved detail in the images combined with the additional breathing room in a crowded operating room will probably make this little device a big hit with surgeons.

But Degertekin is far from finished with his creation. In fact, he’s just begun. Given the camera’s microscopic scale, the implementation possibilities are vast. In particular, he’d like to see this small device embedded on the blades of surgical scalpels, giving the surgeon an extremely detailed look at where they currently are and where they need to be with the tip of the blade. And in a profession where millimeters are the difference between life or death, this small device could literally become a life-saver. 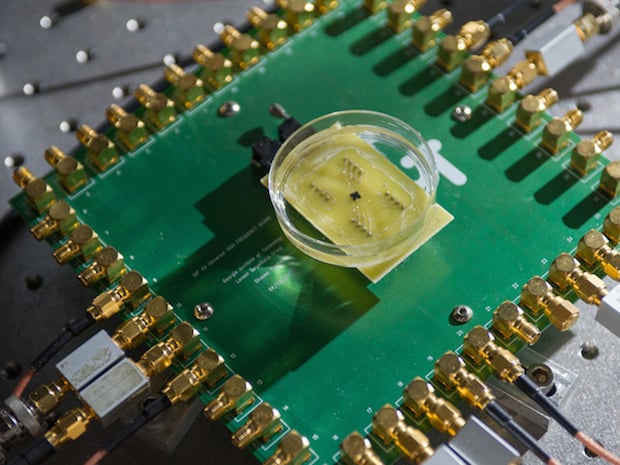 Another potential use mentioned by Wired is including it in patches, which would then be placed over broken and fractured bones before a cast is put on. That way, rather than playing a guessing game with time, a simple check up of the resulting images would be able to tell whether the bone has healed fully or not.

The next step in the evolution of this tiny gadget will be to make it wireless and MRI-compatible. It’s a slow process, as many human trials will need to be cleared by the FDA, but it’s the first of many steps towards taking us into the future of medical imaging.

It’s an incredible time we live in, that is a given. Although this is merely the first of many iterations, it goes to show just how incredible future possibilities are. Of course, it’s not a camera in the normal sense of the word — it’s capturing 3D, high definition images inside of us at a microscopic level at 60 fps — but if that isn’t art, I’m not sure what is. In closing, I’ll leave it to the words of Claude Bernard, “Art is I; science is we.”

Camera Plus AirSnap: Use One iOS Device to Remote Trigger Another