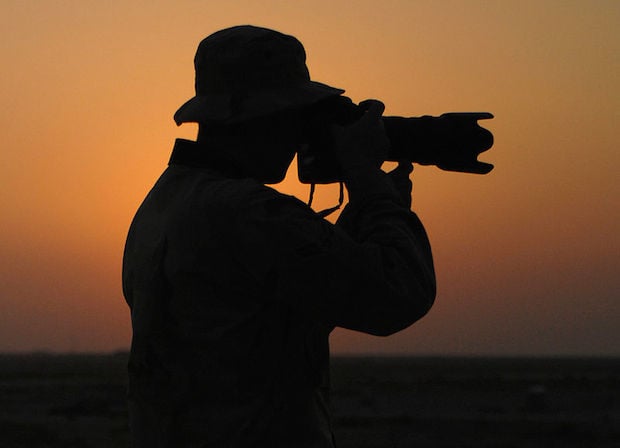 Famous photographers throughout history have produced some incredible images that have stood the test of time, but it’s not only their photographs that are inspirational.

Their acute insights into the creative process have guided generations of photographers and shaped the way even today’s best photographers think about their subjects and scenes.

If you’re stuck for inspiration, or even motivation, we’ve put together 50 quotes from the most inspirational and talented photographers the world has seen to help you get your mojo back.

Eisenstaedt was a German photojournalist most famous for his much celebrated photograph of V-J Day in Times Square, New York.

Stieglitz was an American photographer internationally recognised as being a pioneer of modern photography.

2. “In photography there is a reality so subtle that it becomes more real than reality.”

3. “Wherever there is light, one can photograph.”

Geddes is known for her distinctive, stylised photographs of babies, which often incorporate floral imagery.

4. “The best images are the ones that retain their strength and impact over the years, regardless of the number of times they are viewed.”

5. “I think that emotional content is an image’s most important element, regardless of the photographic technique. Much of the work I see these days lacks the emotional impact to draw a reaction from viewers, or remain in their hearts.”

Leibovitz is an American portrait photographer who made a name for herself in her ten-year role as chief photographer for Rolling Stone magazine.

6. “The camera makes you forget you’re there. It’s not like you are hiding but you forget, you are just looking so much.”

8. “Twelve significant photographs in any one year is a good crop.”

9. “There are always two people in every picture: the photographer and the viewer.”

10. “A good photograph is knowing where to stand.” 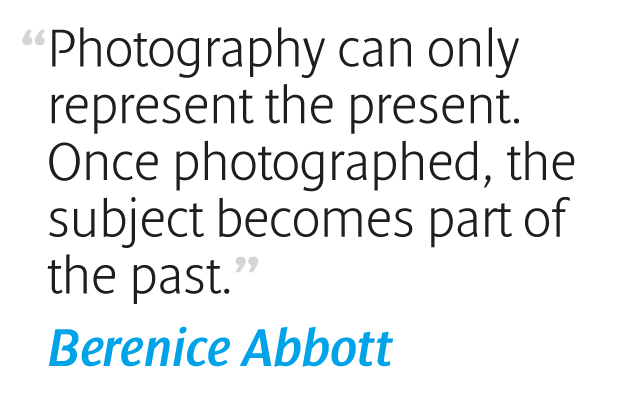 Sander – a German portrait and documentary photographer – has been described as ‘the most important German photographer of the twentieth century.’

11. “In photography there are no shadows that cannot be illuminated.”

American photographer Abbott, had a career spanning more than 60 years. Her black and white images of New York provide an extensive record of the city’s architecture.

13. “Photography can only represent the present. Once photographed, the subject becomes part of the past.”

Uzzle is an American documentary photographer. He still holds the title of the youngest photographer ever to be hired by Life Magazine.

14. “Photography is a love affair with life.”

Waite is an award-winning English landscape photographer. His images have a painterly impression in their use of light and shade.

15. “A landscape image cuts across all political and national boundaries, it transcends the constraints of language and culture.”

DuChemin is a humanitarian, nature, and adventure photographer. His work takes him to far-flung locations across the globe.

16. “Photographing a culture in the here and now often means photographing the intersection of the present with the past.”

Arbus was a documentary photographer famed for her images of marginalised peoples, particularly circus performers.

17. “A photograph is a secret about a secret. The more it tells you the less you know.”

McCullin is a documentary photographer known for his war images, and images of urban and impoverished lifestyles.

18. “Photography for me is not looking, it’s feeling. If you can’t feel what you’re looking at, then you’re never going to get others to feel anything when they look at your pictures.”

Lange was a photojournalist made famous by her photographs taken during the Depression-era in the United States.

19. “Photography takes an instant out of time, altering life by holding it still.”

20. “One should really use the camera as though tomorrow you’d be stricken blind.”

21. “A camera is a tool for learning how to see without a camera.”

22. “To know ahead of time what you’re looking for means you’re then only photographing your own preconceptions, which is very limiting, and often false.” 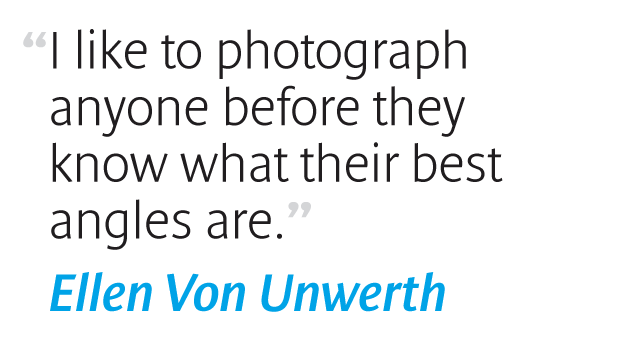 Steichen is known for producing the first fashion photographs ever published. The images of gowns were taken for Art et Décoration magazine in 1911.

23. “A portrait is not made in the camera but on either side of it.”

Weston is famed as being one of the most influential American photographers of the twentieth century. He focused mainly on photographing landscape and lifestyle in the west of the US.

24. “To consult the rules of composition before making a picture is a little like consulting the law of gravitation before going for a walk.”

25. “I like to photograph anyone before they know what their best angles are.”

Erwitt is a master of capturing ‘The Decisive Moment’; his street photography is known for it’s heart-warming charm.

26. “To me, photography is an art of observation. It’s about finding something interesting in an ordinary place… I’ve found it has little to do with the things you see and everything to do with the way you see them.”

27. “It’s about reacting to what you see, hopefully without preconception. You can find pictures anywhere. It’s simply a matter of noticing things and organising them. You just have to care about what’s around you and have a concern with humanity and the human comedy.”

28. “The whole point of taking pictures is so that you don’t have to explain things with words.”

Photojournalist Haas was one of the first photographers to use colour in his work. His impressive career included becoming President of Magnum Photos, and publishing one of the most successful photography books ever.

30. “There is only you and your camera. The limitations in your photography are in yourself, for what we see is what we are.”

Arnold was an award-winning photojournalist and member of Magnum Photos and published twelve photographic books in total.

31. “If a photographer cares about the people before the lens and is compassionate, much is given. It is the photographer, not the camera, that is the instrument.”

32. “My job as a portrait photographer is to seduce, amuse and entertain.”

Cartier-Bresson is widely regarded as one of the greatest photographers of all time. He is known as the father of photojournalism, and coined the term ‘The Decisive Moment’.

34. “The photograph itself doesn’t interest me. I want only to capture a minute part of reality.”

35. “To me, photography is the simultaneous recognition in a fraction of a second of the significance of an event.”

36. “To photograph is to hold one’s breath, when all faculties converge to capture fleeting reality. It’s at that precise moment that mastering an image becomes a great physical and intellectual joy.”

Cunningham’s work was particularly forward-thinking and experimental for its time. Her extensive work included shots of flowers, portraits and nudes.

37. “Which of my photographs is my favourite? The one I’m going to take tomorrow.”

McNally is an internationally acclaimed photographer known for his work with National Geographic Society, and for his collection of photographs showing Ground Zero in New York in the wake of 9/11.

38. “Don’t pack up your camera until you’ve left the location.”

Ray was a fashion and portrait photographer who was active in the Surrealist art movement. He’s best known for his avant-garde photography.

39. “Of course, there will always be those who look only at technique, who ask ‘how’, while others of a more curious nature will ask ‘why’. Personally, I have always preferred inspiration to information.”

Parr’s documentary photography captures the humour of every day British life. He is aptly described as a ‘chronicler of our age’.

40. “With photography, I like to create a fiction out of reality. I try and do this by taking society’s natural prejudice and giving this a twist.”

Caponigro is known as one of American’s leading landscape photographers, although he also photographs still life.

Jones Griffiths was a Welsh photojournalist. He is famed for his coverage of the Vietnam war.

42. “… we are there with our cameras to record reality. Once we start modifying that which exists, we are robbing photography of its most valuable attribute.”

Rankin is an English portrait and fashion photographer whose work has been widely shown in popular media.

Capa was a Hungarian photojournalist known for his war photography. He is perhaps best known for photographing key events during World War II, including the D-Day landings.

44. “If your pictures aren’t good enough, you aren’t close enough.”

Frank is best known for his book The Americans, which was very influential, providing an outsider’s view of American society.

46. “The eye should learn to listen before it looks.”

Mapplethorpe was an American photographer who became known for his large-scale photographic images. His series of homoerotic portraits were subject to much controversy.

47. “The more pictures you see, the better you are as a photographer.”

Mann is a renowned American photographer. Her abstract, black and white photographs cover varied subjects including landscapes and portraits.

48. “Photographs open doors into the past, but they also allow a look into the future.”

Walker is a British fashion photographer whose work has been included in such highly-acclaimed titles as Vogue.

Smith is best known for his hard-hitting photographs of World War II.

50. “Photography is a small voice, at best, but sometimes one photograph, or a group of them, can lure our sense of awareness.”

Which is your favorite quote? Let us know by leaving a comment.

About the author: Samantha Stocks is a writer and photography enthusiast based in Bristol, England. When not hunched over her laptop, she can be found being pulled around muddy Somerset fields by her ridiculously strong dog. Visit her website, or find her on Twitter. This article originally appeared on PhotoVenture.

Answering the Unanswerable: What is the Resolution of the Human Eye?