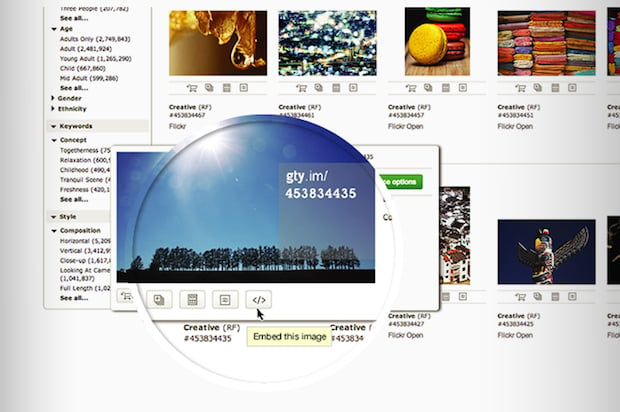 Last night, Getty Images made a huge announcement that could forever change the way high quality images are shared on the Internet. Like Flickr before it, Getty is introducing an embed feature, essentially creating an “easy, legal, and free” way for people to share the majority of the agency’s images in a non-commercial context.

It’s hard to overstate the importance of a move like this. Getty is the king of the hill where image licensing is concerned, and they are basically admitting that they cannot fight the entire Internet at once.

“We’re really starting to see the extent of online infringement,” Getty Senior Vice President of Business Development, Content and Marketing, Craig Peters, told BJP. “In essence, everybody today is a publisher thanks to social media and self-publishing platforms. And it’s incredibly easy to find content online and simply right-click to utilise it.” 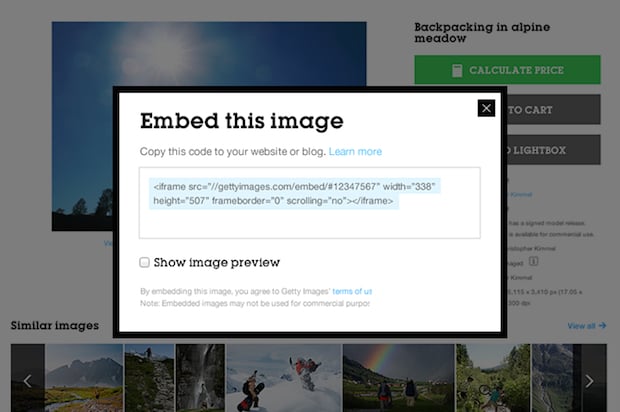 So how do you fight the Google Image Search/right-click-save-as culture we live in? Well, it seems Getty’s solution — which is bound to receive untold amounts of criticism from the photo community — is that if you can’t beat them, join them… just make sure they give proper credit in the meantime.

According to BJP, everybody — from your small-time blogger to larger websites that generate ad revenue, to publishers like BuzzFeed and the NY Times — will have access 35 million images from Getty Images’ news, sports, entertainment, stock collections and archives, available to share freely and without a watermark as long as they’re not doing so commercially.

All they have to do is simply click the embed button, copying the HTML code and paste it wherever it needs to go. And just in case that wasn’t accommodating enough, they’ve added Twitter and Tumblr share buttons as well. 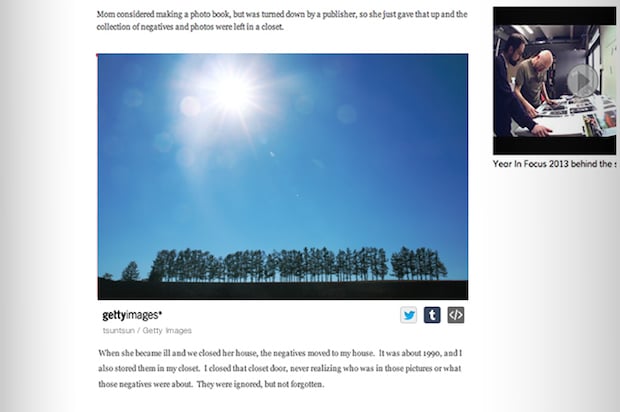 At a time when the photo community is increasingly dissatisfied with how Getty does business, this move is bound to draw ire, especially since there will be no way to opt out. But Peters defends the move nonetheless.

There are three reasons, he says, why this is a good thing for both Getty and content creators: shared photos will now be properly attributed, all images will link back to the licensing page so those that need to license it commercially can do so in just a few clicks, and Getty (like YouTube) will use information on who is using that image and how to improve their business. They will also likely implement ads in the near future; again, much like YouTube does with its embeds.

Here’s a look at what these embeds look like:

No matter how you slice it, in the end, this represents Getty throwing in the towel when it comes to non-commercial use of its images. They’ve lost this war, and rather than fight the hoards of people on the Internet who pull their images without watermark or credit and use them all over the place, Getty has created a legal use avenue that they believe will “benefit [their] content creators.”

The benefit to their content creators is debatable, but one thing is for sure: this decision will reverberate across the whole of the photography industry, quite possibly leaving other players in this game little choice but to join Getty, implement embeds, and hope for the best.

To learn more, head over to Getty’s website by clicking here.