DxOMark has already had a chance to put the exciting new Tamron 150-600mm super telephoto lens through its paces, and the results might surprise you. At a fraction of the cost, it actually OUTPERFORMS pricier (and not as far-reaching) Canon glass when mounted on full-frame systems.

If you’re new to birding or wildlife photography, and you’re in the market for a super telephoto lens, then you’ve probably heard about Tamron’s 150-600mm f/5-6.3 Di VC USD lens. It’s new, it’s longer than anything Tamron has ever made, and so far samples have people very optimistic about this lens.

Well, that optimism seems to be well-founded. Because while the general rule might be ‘you get what you pay for,’ DxOMark’s tests show Tamron paid no heed to this wisdom when the company created the 150-600. Here’s the comparison chart that shows how the Tamron lens did up against Sigma’s 150-500mm and Canon’s 100-400mm L-lens: 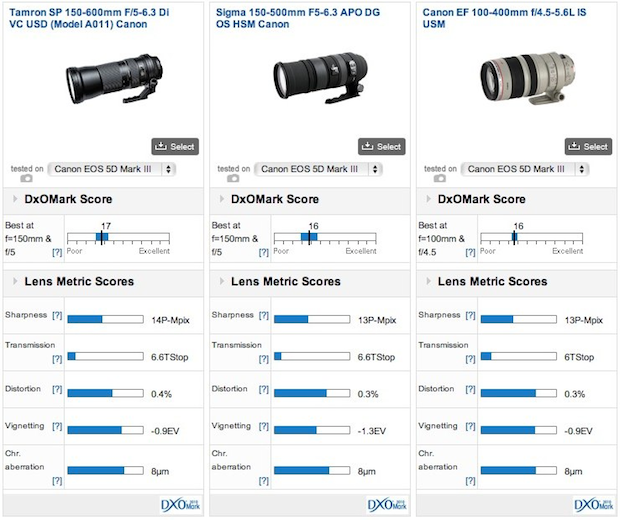 If Tamron built this lens to outperform the Sigma offering then they succeeded with full frame cameras. The gain in performance over their rival’s offering is less noticeable on the APS-C cameras. Despite that, the image quality is a slight improvement over the Sigma. Given the longer range and similar price, it’s a pretty impressive achievement.

The Tamron even outperforms the pricier Canon lens on the full frame Canon EOS 5D Mk III though it’s less convincing when compared with the Canon EOS 7D. There’s likely too little in it to switch but for first-time buyers the new Tamron is an attractive proposition.

The results beg the frequently-begged question: are third party lenses the future? DxOMark doesn’t deign to answer that question (and neither will we, although you can feel free to discuss it in the comments!) but if Sigma, Tamron, Samyang and so on continue to release great lenses at reasonable prices, Nikon and Canon will certainly be giving that query some thought.