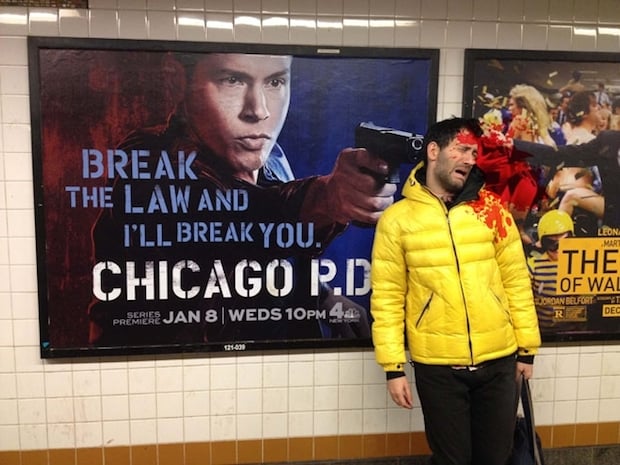 Artist Jon Burgerman thinks there are too many violent film posters greeting us everywhere we go. These posters of movie and TV show characters holding weapons are all too common, and most of them show the protagonist brandishing their weapon right at the viewer.

And so, Burgerman decided to fight back using a little bit of fake blood, a sense of humor and photography.

That interesting combination yielded the photo series ‘Head Shots,’ a protest of sorts in which Burgerman inserts himself into these posters as the protagonists’ victim. Whether it’s an arrow courtesy of Hunger Games heroine Katniss Everdeen or a bullet straight from 007’s gun, subway posters really seem to have it out for Burgerman: 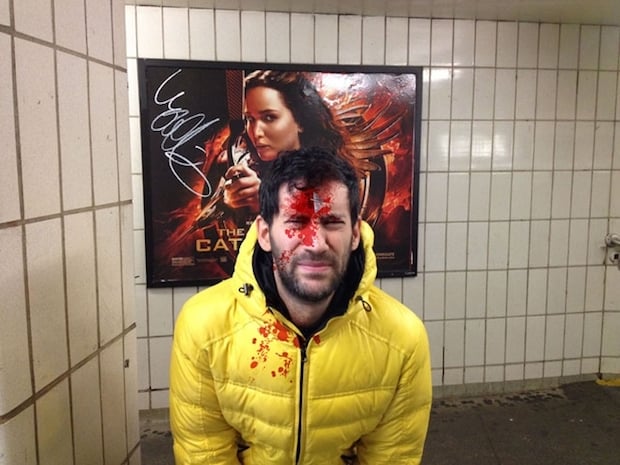 “I thought it would interesting to add myself back into the suggested scenes and complete the compositions to their natural conclusions,” he tells Yahoo! Movies. “This body of work is part of what I call a ‘quiet intervention’, where subtle, often cheap, nonpermanent actions drastically (and sometimes comically) alter the reading of a signifier, object or situation.”

And you have to admit, it’s worked on at least one level. Where a standard protest or letter to the appropriate governing body might have gotten him a polite response… maybe even an apology… this series has now been shared on several major news and blog sites.

Image credits: Photographs by Jon Burgerman and used with permission