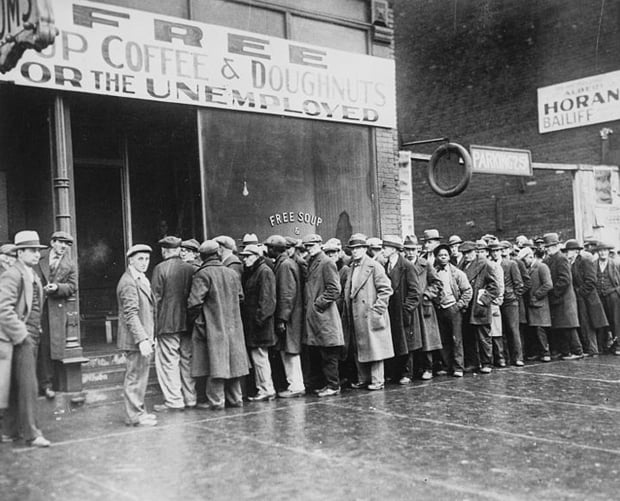 Yesterday we featured a far too common headline that went something like “*insert newspaper here* fires all photographers.” This time, it was an entire chain of local UK papers, and like the Chicago Sun Times before it, the chain is planning to replace these pros with freelancers, submitted photos and reporters with smartphones.

These kinds of headlines and stories make us sad, because we believe that the newspapers are making a grave mistake in undervaluing photography and the professionals who call it their vocation, but one Guardian writer has caused an uproar by holding to the exact opposite opinion.

In a blog post that incited so much negativity as to warrant a followup, The Guardian‘s Roy Greenslade sparked a firestorm yesterday when he called newspaper photographers ‘redundant,’ claiming that the move by the Johnston Press to fire their entire photo staff was economically savvy.

In fact, with the exception of the occasional difficult assignment — for which Greenslade would call in a professional freelancer — he believes that “anyone” can cover “the general run of the news diary” for a weekly local newspaper.

Commenters, to put it kindly, disagreed: 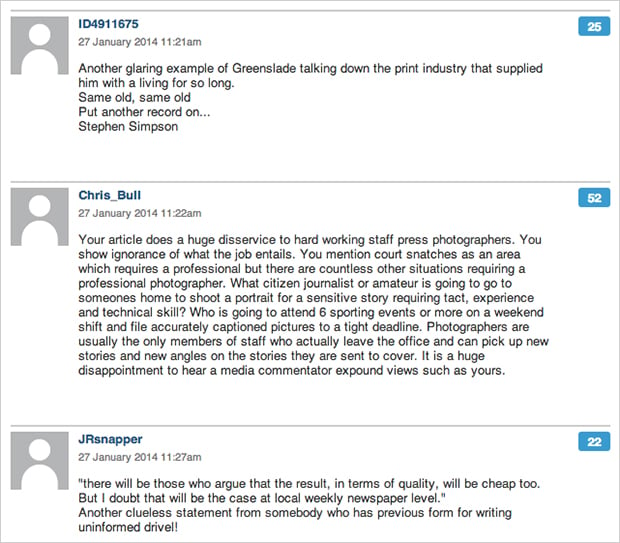 In response to comments that called his opinion everything from “drivel” to “rubbish” to “moronic,” Greenslade published another post, asserting that he was still right:

With so many commenters and emailers arguing from the perspective of national titles or, in the case of the United States, regional daily papers, it is blindingly obvious that they failed to understand what I wrote and the context

So look back please. I restate that I referred only to British local weekly newspapers. I restate that I accept the need for papers to use skilled professional photographers, but as freelancers rather than on staff.

The thing is, even the British Press Photographers’ Association went after him, calling his opinion “an insult to the skilled photographers,” and claiming that, “it really doesn’t help the case for… quality journalism when one of the highest profile commentators on the industry has given up on any notion of defending the simple idea that quality products have longevity and cheap ones don’t.”

As you can tell, the feud has turned rather nasty (as Internet feuds are prone to doing) with each side entrenched in their own opinion and refusing to give ground.

We, obviously, side with the Press Photographer’s Association. Professional work, be it in a local weekly newspaper or on the national scale, is still professional work. Using images captured by reporters with smartphones will only hasten the demise that these papers are so desperately trying to avoid by slashing salaried photographers in the first place.

Mr. Greenslade, on the other hand, sees the move into the digital age as akin to industrialization in the 19th century. Photographers, he explains, are like home-working weavers and knitters who were being replaced by machines.

“At the time, those workers would have [said] that the quality of the yarns initially produced by the new machinery was inferior to their own efforts,” writes Greenslade. “But it would not have been a case of me talking down their work nor of talking them down personally. It would have been a description of reality. Economics and technology dictated what happened, as now with the fate of newspapers.”

You can read both the original and followup posts in full by following the corresponding links. But before you do, let us know what you think in the comments. Are we shooting the messenger here, or is Mr. Greenslade the one missing the point?

Act a Fuji: Four Months With The X100S