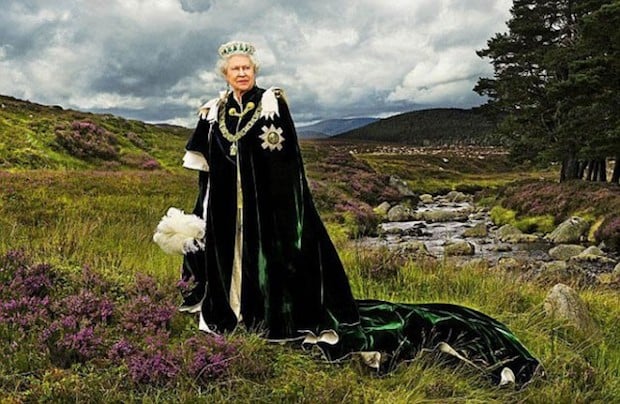 The Scottish National Portrait Gallery very recently unveiled a photograph of Queen Elizabeth II that might just rank as the most legend(wait for it)dary portrait of a monarch ever taken. It’s titled, “Queen of Scots, Sovereign of The Most Ancient and Most Noble Order of The Thistle and Chief of The Chiefs” and the name only partially does it justice.

The photo was taken by photographer Julian Calder at the Queen’s Balmoral estate, and it shows her majesty standing outdoors, decked out in the raiment of the “Sovereign of The Most Ancient and Most Noble Order of The Thistle” and looking every inch as regal as you might imagine an 87-year-old monarch could.

According to Popular Photography, the photo was actually taken all the way back in August of 2010, but was only revealed to the public eye last year as part of the book Keepers: The Ancient Offices of Britain. Once public, the Scottish National Portrait Gallery wasted no time in acquiring it.

Gallery Director Christopher Baker calls the photograph “a striking and distinctly Scottish portrait, which represents an accomplished and fresh interpretation of traditional imagery.”

If you’d like to learn more about the photo and how it was taken — spoiler: bad weather and a midge attack made this one particularly challenging — check out this article published last May in The Daily Mail.