Forget Times Square, the place every photographer wishes they were on New Year’s Eve 2014 (or is it 2013?) was Dubai. Why, you ask? Because this year the city set the world record for the largest fireworks show, and captured the entire thing on camera for posterity’s sake.

The video above was put together by Downtown Dubai and actually shows the entire celebration, but we’ve gone ahead and skipped you forward to a few seconds before the countdown itself starts. And once that countdown hits zero brace yourself, this is one doozy of a show.

Over 500,000 fireworks were set off during the show from 400 different locations along a total of 61.6 miles of coastline. The show took 10 months to plan and the finale created “an artificial ‘sunrise'” along the coast, with some of the fireworks reaching over half a mile in the air. 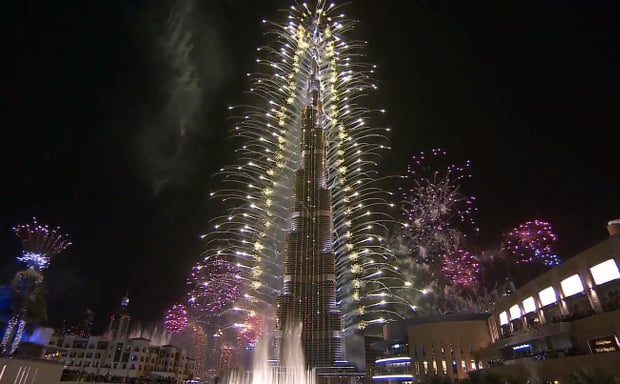 The goal of the show, beyond giving photographers something unprecedentedly awesome to capture, was to beat the 2012 world record set during Kuwait’s golden jubilee anniversary. Well, they didn’t beat it… or rather we should say they didn’t JUST beat it… they SMASHED it.

In 2012, Kuwait set off only 77,282 fireworks. The city of Dubai set off more fireworks in the first minute of its six-minute show.

Designed by U.S. firm Fireworks by Grucci, the show used 100 computers and 200 expert technicians who worked some 5,000 man hours to properly synchronise the pyrotechnics. And to think, I was on my couch watching the ball drop. On the off-chance any of our readers were in Dubai for this, please share your photos in the comments below!

(via The Verge via Guinness World Records)