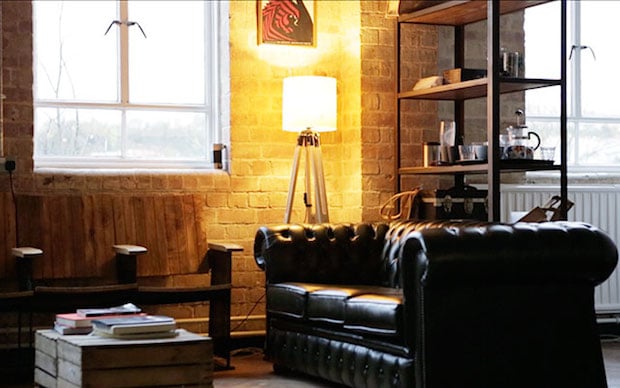 In case you haven’t noticed, we’re fans of quirky camera-themed products that put gear to creative use. Be it a lamp made out of un-fixable retro cameras or a humidifier disguised as a lens, we just like that sort of thing. Phlite, therefore, is right up our alley.

Called crazy or awesome (and sometimes crazy AND awesome… or crazy awesome) depending on who you ask, Phlite transforms your gear into a camera-themed desk, table or floor lamp in seconds, so you can enjoy your gear even when you’re not out shooting with it. 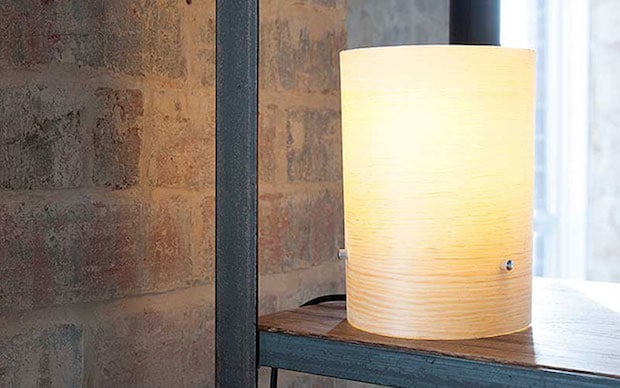 The idea for Phlite came to inventor and cofounder of enlight photo Ltd. James Madelin when he realized that the aesthetics of camera equipment were becoming almost as important as the equipment itself.

With cameras like the new Nikon DF and, long before it, the Fuji X-Series taking up the mantle of retro beauty from the classic film SLRs, Madelin thought it was a shame these beautifully designed pieces languished inside a camera bag when not in use.

I was putting over $300 of my favourite carbon tripod away in the bottom of a cupboard when I thought … this is CRAZY! I love this gear … it seems so wrong to hide it. With that thought tumbling around in my mind, a few days later I started to think of ways I could transform my favourite tripod and old cameras into something I can have on show all the time. You could say a light went on over my head when the idea of Phlite was born. 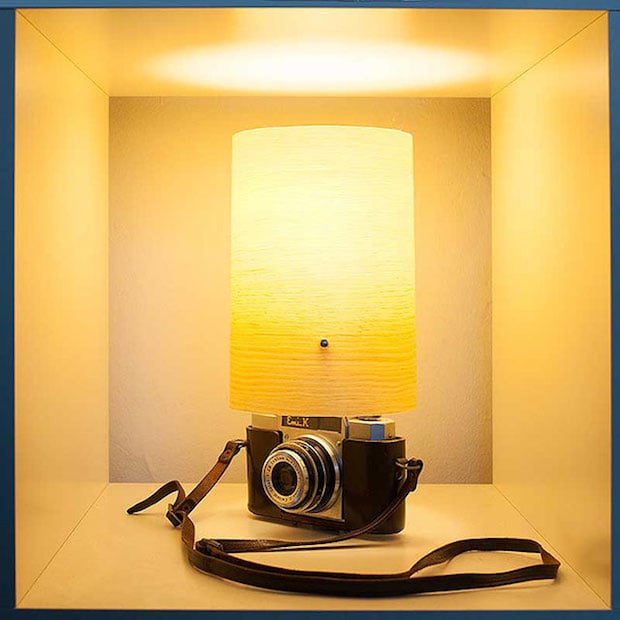 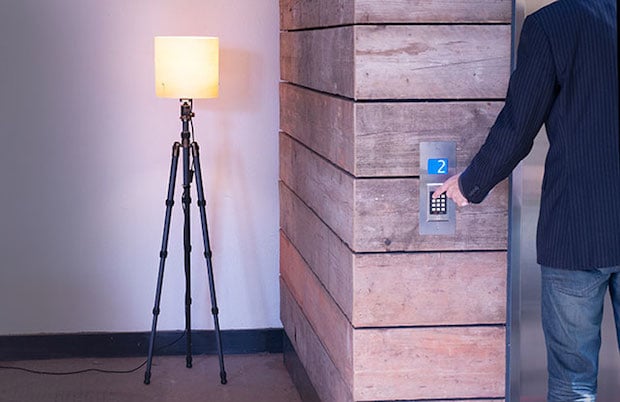 Phlite puts that gear to use as a desk, table or floor lamp by attaching an attractive looking lamp to your camera via the hot shoe or to your tripods and lightstands using Phlite’s patent-pending quick-fit clip.

Everything slides on and off very quickly and without much hassle, that way the gear is still easily accessible for when you have to go; and even when your gear is in use elsewhere, Phlite sits flush with the table so the lamp is still usable.

DIYers will also appreciate the fact that Phlite plans to offer free downloadable patterns that can be added to the Phlite shades for a more custom look. 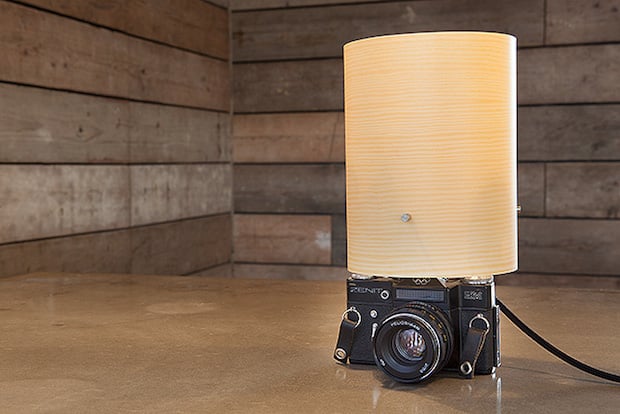 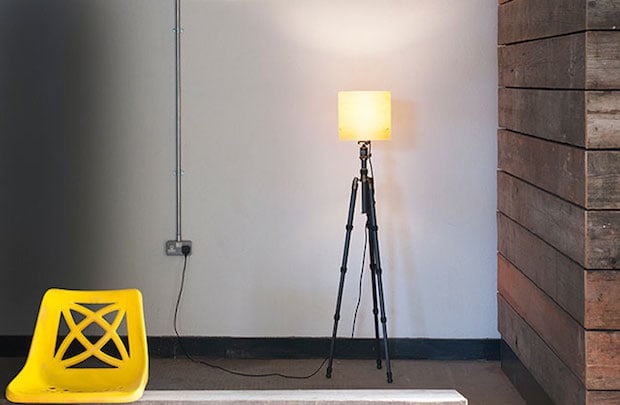 When we spoke with him, Madelin explained that the possibilities really are as broad as your imagination:

From the feedback I’ve been getting from my close friends… Phlite is what you make it. Some photographers I know are getting really excited about turning their lightstands into cool industrial floor lamps. Others are really excited about getting the vintage camera they’ve got somewhere and giving it pride of place.

And when you’re dealing with quality camera gear, you want to make sure you’re creating a quality product, which is why Madelin assured us that Phlite is made from only high quality components and assembled into a beautiful finished product that will compliment, rather than take away from, the gear you intend to put on display. 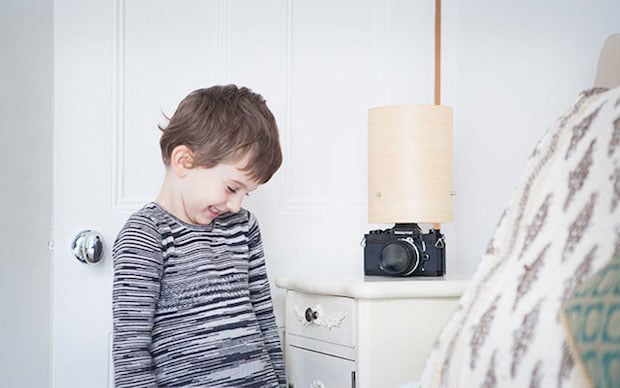 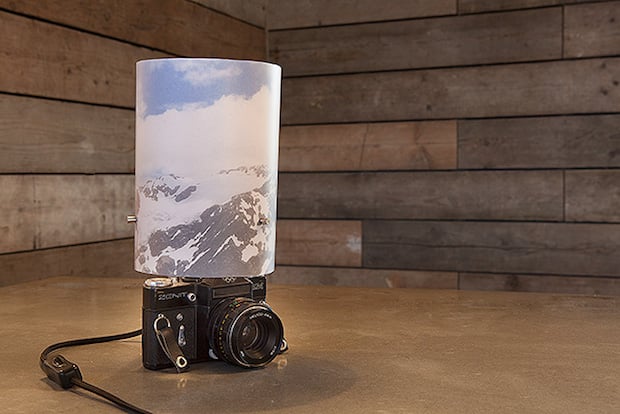 As with all these sorts of ideas, getting a product like this off the ground requires some capital, and so Madelin is taking to Kickstarter to bring Phlite into the real world. We’ve gotten exclusive coverage of the launch, so you’re the first to hear about it and, therefore, the first to get a shot at the early bird specials as well.

Phlite comes in two sizes: small and large — the small works better for cameras while the large works better as a floor lamp attached to your favorite tripod — which run $65 and $80, respectively. Early birds, however, will have a chance to snag a large Phlite for only $65 or pick up a set with both a large and small Phlite for only $115. Shipping to both the US and UK is free.

So there you go, if you want to start putting both your old and new gear to use when you’re not shooting rather than stuffing it inside a camera bag or letting it languish its days away in an attic, head over to the Phlite Kickstarter page and see what they’re all about.

And if you’re already interested in buying one — either for yourself or for someone on your Christmas list — be sure to jump on those early bird specials before they go away.