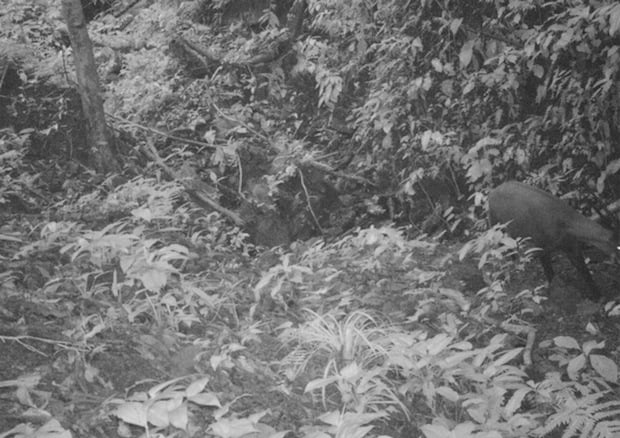 It’s a good day at the World Wildlife Fund when one of your camera traps captures a photo so rare, you won’t find another like it taken in the last 15 years. The photograph shows a “saola,” an animal so rare it is more commonly known as the ‘Asian Unicorn’ and hasn’t been photographed in the wild since 1998.

As much as this is a win for photography and the WWF in particular, the importance of this sighting just drives home how incredibly endangered this animal is. At the most, only a few hundred of the animal are thought to still exist in the wild… and more conservative estimates put their numbers in the tens.

So while these photos might seem a bit lame by photographer standards, don’t discount their importance. “When our team first looked at the photos we couldn’t believe our eyes. Saola are the holy grail for South-east Asian conservationists so there was a lot of excitement,” said WWF-Vietnam Director Dr. Van Ngoc Thinh in the press release. “This is a breath-taking discovery and renews hope for the recovery of the species.”

A total of three photographs of the ‘unicorn’ (the animal actually has two horns) were captured. Here are the other two, as well as a color photo taken in the mid 90s that shows the saola much more clearly: Now that they’ve caught sight of the saola, conservationists in the area have a renewed vigor that stems from this proof that what they are doing is actually working.

“This is a monumental find and comes at a critical moment in time for saola conservation,” said Dr. Barney Long, Director of Species Conservation Program at the WWF. “It’s a huge reward for decades of tireless work by the provincial government… Now it’s time to double our efforts to recover this iconic species.”

Today, this photograph is rare enough to make headlines in major outlets and photo blogs alike. In the future, hopefully we’ll see many beautiful photos of these animals taken by wildlife photographers instead of camera traps.

Snapchat Supposedly Turned Down a $3 Billion Acquisition Offer from Facebook