In the digital age, having your photos stolen usually indicates copyright infringement by someone who decided to use your work without permission online. But for Ukranian-born photographer Aleksandr “Sasha” Onyshchenko, the term recently took on the old definition: two of his prints were literally stolen right out of the gallery they were being displayed at in broad daylight!


The theft happened on October 11th around 1:30pm at the Assumption Life Art Gallery in Moncton, Canada where his series “The Beauty of the Human Lines” was on display. Caught entirely on surveillance tape, we see a man walk in, stand around looking at the prints for a minute, and then up and remove two of them and simply walk out the back. 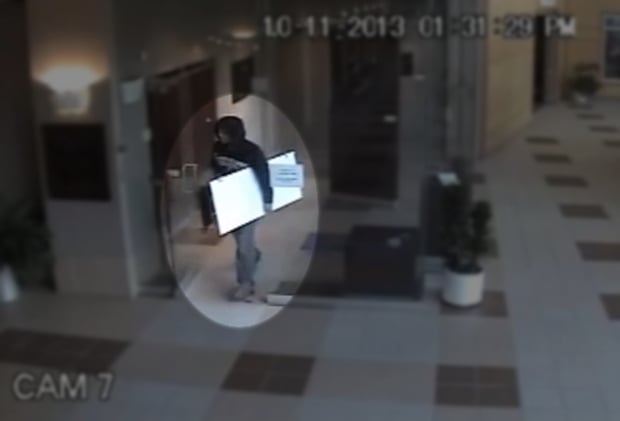 According to Onyshchenko, the two photographs — one 20×50-inch print and one 15×30-inch print — are worth a total of $2,250. And so, in the hopes of keeping the thief from selling them, he’s trying to get the word out and share the surveillance footage with as many people as possible.

“I’m putting this all online to make everyone aware that those are stolen prints and to prevent the thief from making money off of them,” writes Onyshchenko. “Photographers around the world go mad and are always ready to back each other up when s#@t like this happens, and I’m sure it will be a matter of few days before everyone in Atlantic Canada will be able to identify the images as ‘stolen.'”

The theft has been reported to the proper authorities and the police are reviewing the surveillance video in hopes of identifying the perpetrator. If you have any info about the stolen limited edition prints, Onyshchenko asks that you please call (506) 871-8140, but even if you don’t, he hopes you’ll spread the word so that the thief at the very least doesn’t profit from his work.