In another “sign-of-the-times” type of story out of Australia, the company Tennis Australia has been in hot water with photographers for over a month now over a classified ad posted on News.com.au. The ad called for photogs with “previous experience,” “a strong knowledge of tennis,” and their own equipment. The pay? There is none.

That’s right, the positions advertised were strictly volunteer positions, with the ‘payment’ boiled down to free access to Tennis Australia’s popular December Showdown — the 2,000 player tournament for spots in the Australian Open — and, of course, “valuable experience.”

Needless to say not everybody in Australia with a camera took kindly to the ad, leading to a social media campaign against them and a strongly worded open letter form the Media, Entertainment & Arts Alliance (MEAA), which you can read here. 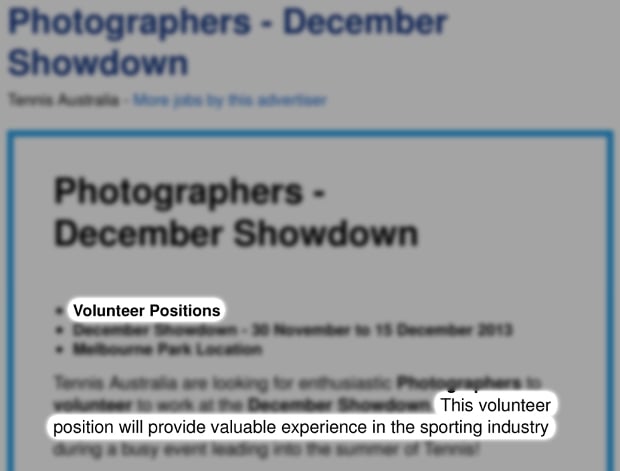 According to Media Watch, Tennis Australia pulls in some $200 million per year in revenue and makes a profit. Prize money for the Australian Open was also just increased to $33 million, and the company was trying to hire a junior PR Person for the same December Showdown at $40,000 a year — but when it comes to hiring photographers, the budget doesn’t seem to exist.

“It’s a sign of the times. The industry is dwindling. People are willing to work for nothing and photography is being devalued,” sums up award-winning Australian photographer Dean Sewell in a statement to Media Watch. “On any given day you’ll have News the Herald and radio stations too asking for images from the public. It undermines the work of professional photographers.”