At times, wildlife photographers have to show an incredible amount of patience to get the perfect shot. Wild animals (much like humans, actually) rarely do exactly what you want them to, and when they do, you and your camera have to be prepared.

But still, how long could you possibly have to wait? Hours? Days? Weeks maybe? For Nat Geo photographer Steve Winter — who was chasing the perfect shot of a Mountain Lion with the lights of Los Angeles in the background — that patience had to extend a full year.

If you’re wondering why it took so long, one of the reasons might be that there is only one mountain lion in the world that lives in a place that would make this photo possible. The elusive cougar, named P-22, is a 125-pound 4-year-old that has quite miraculously made his home in Griffith Park, where researchers caught and tagged him.

When Winter found out about P-22, however, he had a different kind of capture in mind: he set about trying to photograph him. And in the end, he succeeded: 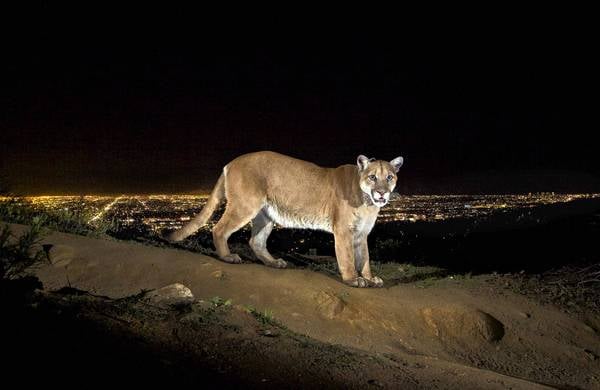 To get this shot, he set up several IR-triggered DSLRs in special housings. The cameras would go off and trigger a flash when they sensed movement. But even with the high-tech setups (three of which were stolen by an entirely different kind of predator) it still took a full year before P-22 decided to give in and pose like a good kitty.

In truth, Winter actually wanted to get two shots. The first is the one you see above, but the second was one National Park Service biologist Jeff Sikich thought was “crazy.” Winter wanted a shot of P-22 with the Hollywood sign.

As you might expect, Winter managed to get that shot too. And thankfully, that one only took two more months of waiting to capture instead of another year.

To hear the story behind the photographs from the man himself, be sure to watch the video at the top. And if you want to see both photographs, you’ll have to pick up the December issue of National Geographic when it hits stands.