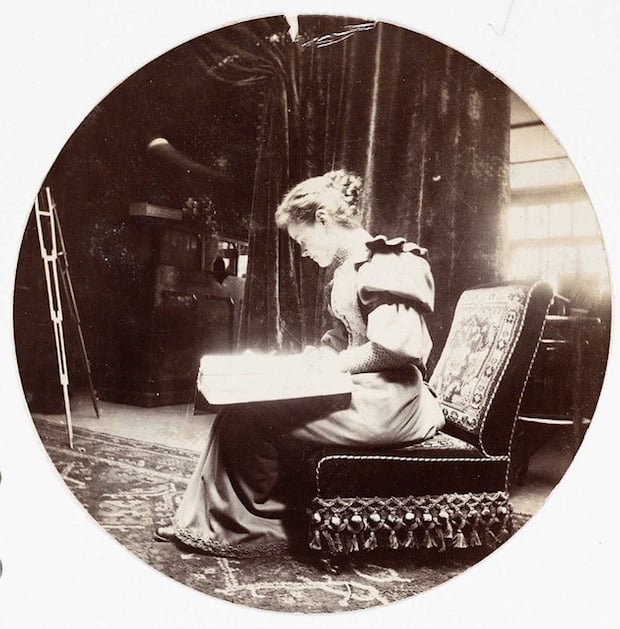 It could be argued that consumer photography didn’t begin until 1888, when Eastman Kodak made his Kodak No. 1 (the followup to the Kodak Box) available to the public at large alongside the now famous slogan: “You Press the Button, We Do the Rest.”

And thanks to the National Media Museum, we now have a small gallery of sample photographs that show what photos taken 125 years ago with the Kodak No. 1 looked like.

Without a doubt, the Kodak No. 1 revolutionized photography. A plain-looking, leather-covered wooden box preloaded with 100 exposures, its simplicity and (relatively) low price tag made it the first camera realistically available to the masses. 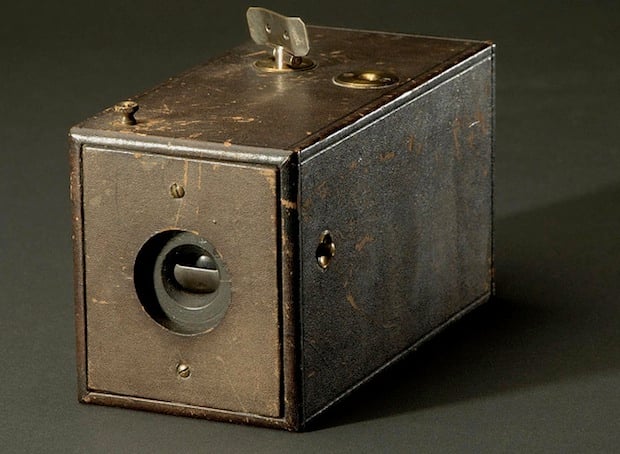 Using the camera was as easy as turning the key to wind the film, pulling the string to set the shutter and pressing the button. So, technically, the slogan should have read “You wind the key, pull the string and press the button… we do the rest,” but you can’t blame them for shortening it.

When you had used all 100 of your exposures, you would send the entire camera back to Kodak where the company would develop your prints and send them back alongside the re-loaded camera.

When your photos finally arrived, what you had in hand was 100 2.5-inch circular prints that looked something like this: 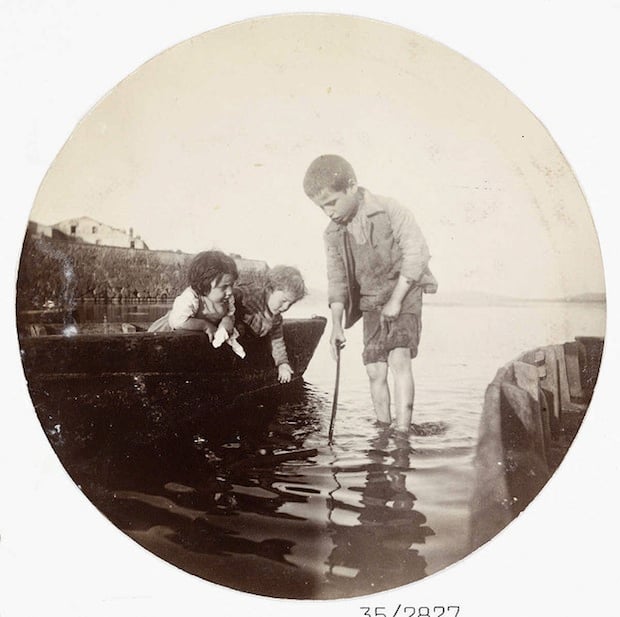 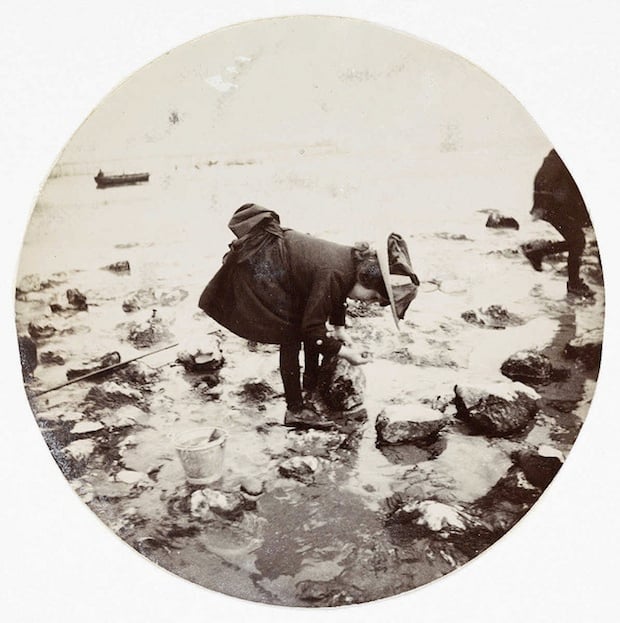 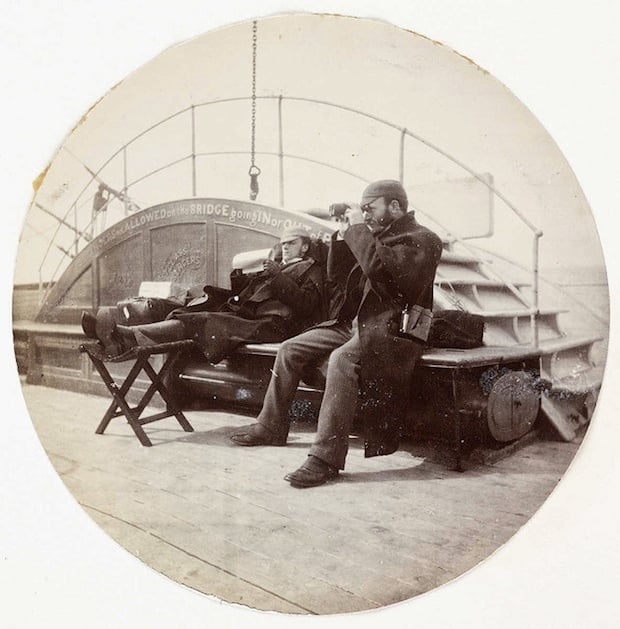 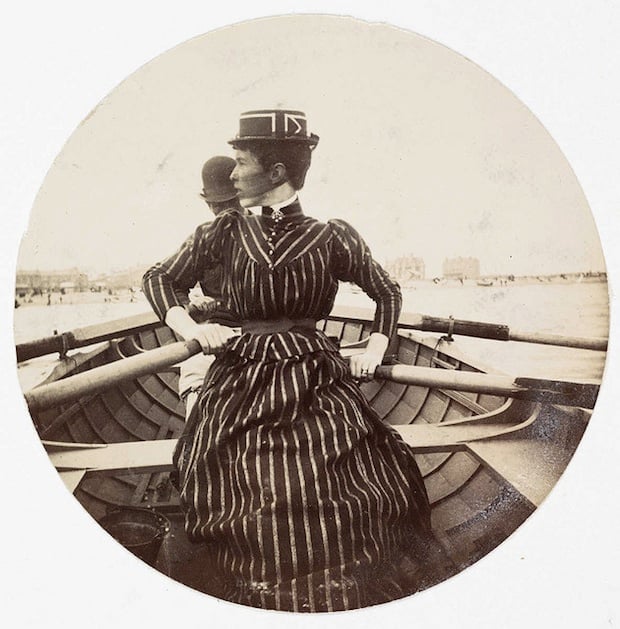 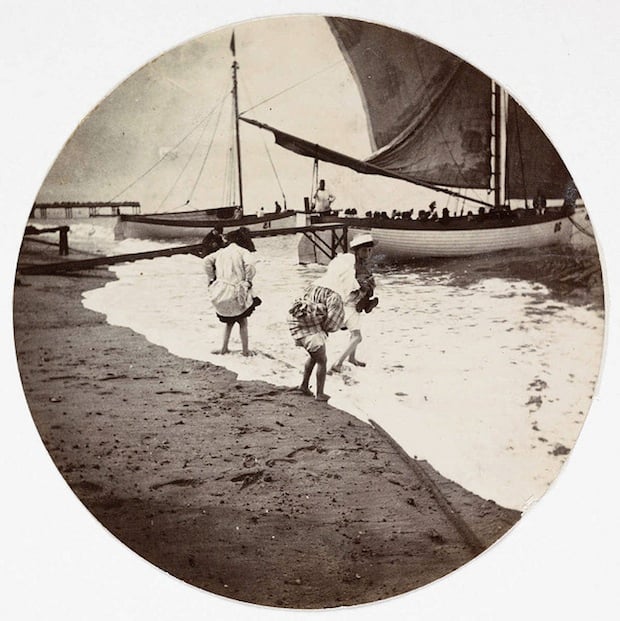 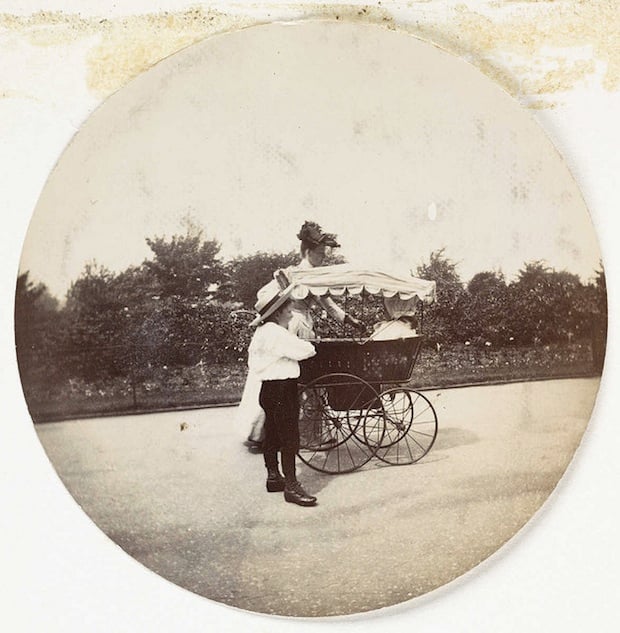 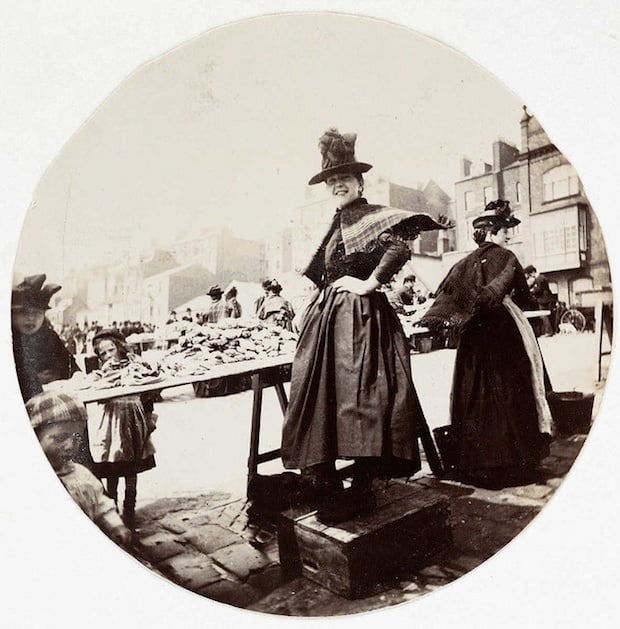 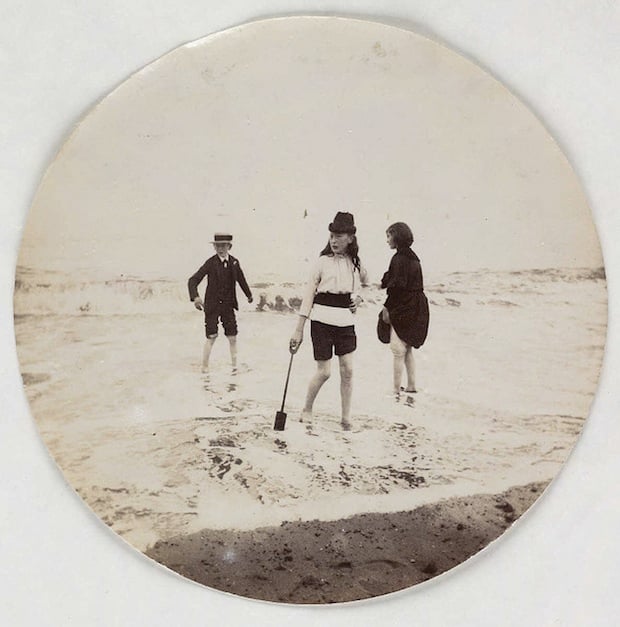 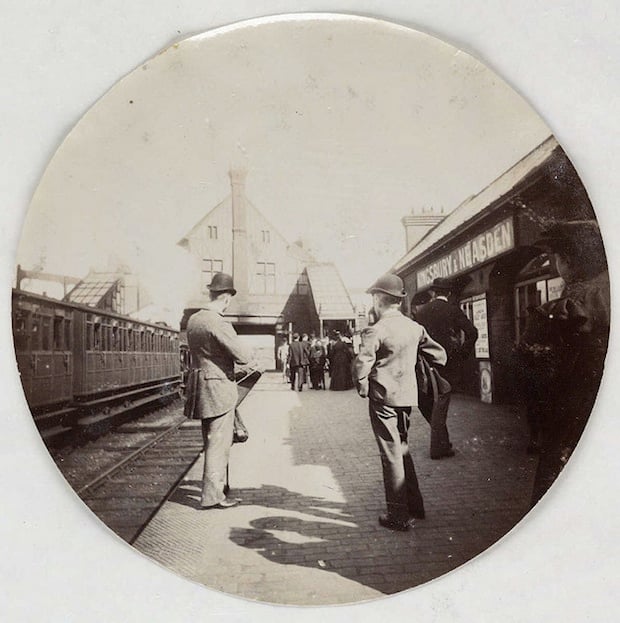 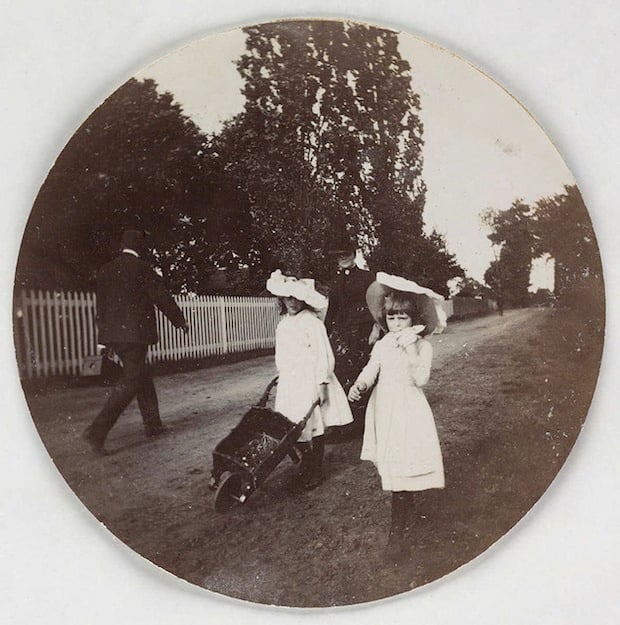 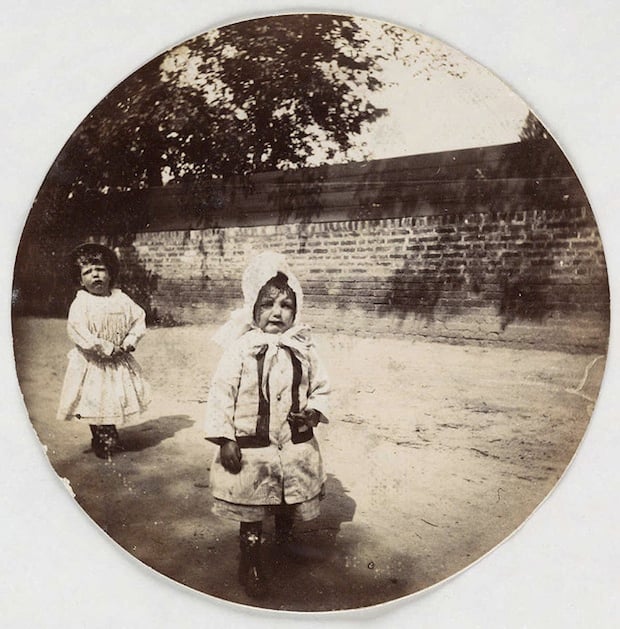 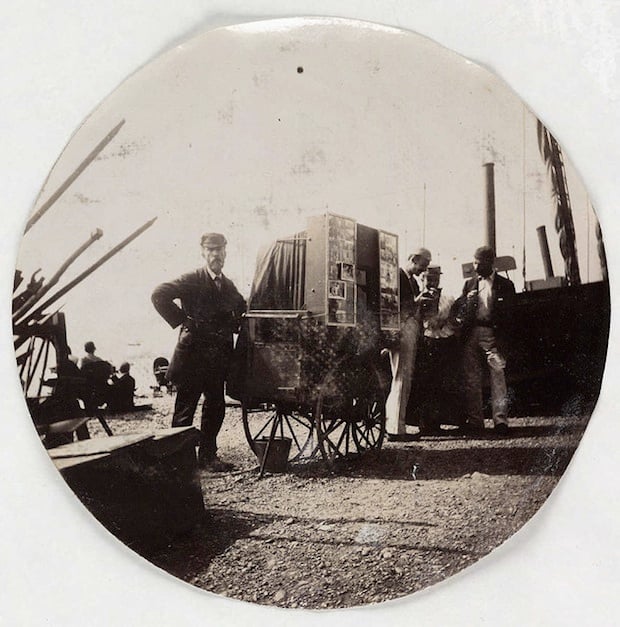 The photos above give us a glimpse into the interests and daily lives of regular people in the early 1890’s, to whom photography still held a very magical quality. You could consider these the first photos ever taken by “amateur” photographers.

That’s because, thanks to Eastman Kodak, you no longer needed to be a professional to own a camera and take pictures. All you needed was little bit of money. When the Kodak No. 1 came out, it cost $25 for the camera and $10 each time you had to send it in for reloading/developing — in today’s money, that translates to about $630 and $250, respectively.

To learn more or see all of the Kodak No. 1 images available through the National Media Museum in high-resolution, head over to the Museum’s Flickr account by clicking here.

Image credit: Original Kodak Camera, Serial No. 540 by National Museum of American History and Kodak No. 1 Photos courtesy of the National Media Museum.

Educational, Finds, Industry, Inspiration
amateur, amateurphotography, consumer, Kodak, nationalmediamuseum, worldsfirst
Related Articles
Discussion
Trending Articles
Photographer Captures the Many Colors of the Full Moon Over 10 Years
May 25, 2022
Photographer Teaches Posing to Prove Anyone Can Be Photogenic
May 26, 2022
The Kodak Ektar H35 Shoots Two Photos Per Frame of 35mm Film
May 26, 2022
Astrophysics Student Takes Graduation Photo Under a Total Lunar Eclipse
May 26, 2022
Nikon Plans to Basically Abandon DSLRs by 2025
May 26, 2022