Remote cameras are a great way to shoot wildlife, and have captured to some pretty incredible photos and footage over the years. An example that comes readily to mind is the amazing Bear ‘dance party’ captured by one of Park Ranger Glenn Naylor’s wildlife cams back in July.

The Instant Wild project also uses remote cameras, but their purpose is a little different. Their cameras are helping to protect some of the world’s most endangered species … with a little help from you.

Instant Wild is the result of a collaboration between Cambridge Consultants, conservationists at the Zoological Society of London (ZSL) and the folks at the Kenya Wildlife Service (KWS). The three groups set out to figure out a way to protect endangered species located in some of the most remote parts of the world.

What they came up with was a network of remote satellite cameras and an accompanying iOS app. 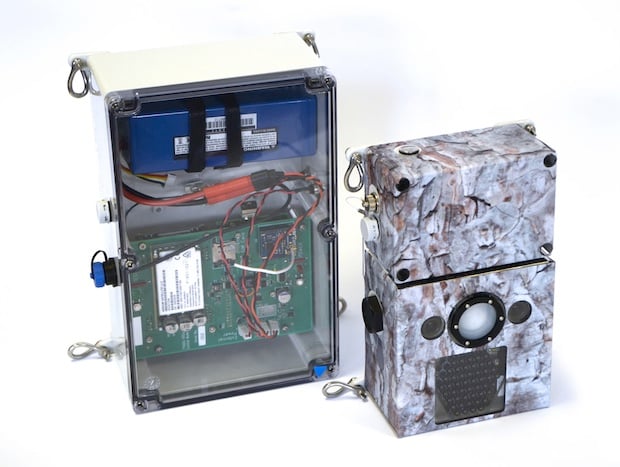 The cameras themselves had to be designed with their specific purpose in mind. Built around a Raspberry Pi micro-computer, they can work on a single battery for a long time. They also come complete with an LED flash for night time pictures, and were tested to make sure they could withstand extreme environmental conditions.

Whenever the cameras detect movement they begin snapping photos, which are then transmitted over the Iridium satellite communication network to the world wide web. That’s where you and the app come in. Keeping track of all the data that comes from these motion-triggered cameras daily is a mammoth task that Instant Wild is managing through crowdsourcing. By downloading the app or visiting the Instant Wild website, you can help identify animals and perhaps help slow or stop poaching.

“In the last 18 months alone, more than 1,000 rhinos in Africa have been killed as a result of soaring demand for rhino horn products. We need to stop the poachers now before it’s too late,” says Professor Jonathan Baillie, director of conservation programs at ZSL. “[The cameras] create a safety net of eyes and ears to protect threatened wildlife — and contribute to the efforts of cutting poaching there significantly in the next two years.” For now, the ZSL has only installed the cameras in Kenya, but expansion is in the works. Once the system is up and running at full speed in Kenya, the plan is to bring the cameras to Indonesia, Sri Lanka, the Himalaya and the South Pole as well.

To find out more about the program, or maybe do your part identifying some animals captured by the Instant Wild cameras, head over to the Cambridge Consultants website, check out the Instant Wild website, or download the iOS app form the iTunes App Store.

A Look at the Past, Present and Future of Stop Motion Animation