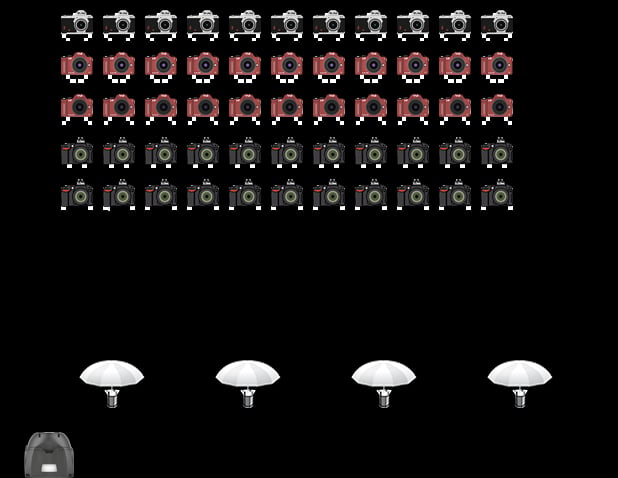 It’s Labor Day here in the US, which means most people (read: not the PetaPixel staff) are taking the day off, siting at home and possibly getting ready to fire up the grill in the next few hours. Whether you’re at home or at work though, if you’re looking to kill some time, we’ve found a great solution for you.

It’s called Camera InVaders, and it’ll give you something fun to do while you wait for either 5 o’clock or lunch time.

The game was put together by Udi over at DIY Photography, who loved the old arcade game Space Invaders so much he decided to create a camera-themed version. Instead of a ship, you’re shooting with DIYP’s own Light Blaster; instead of aliens, you’re taking down a selection of DSLRs and rangefinders; and instead of shields, you have what looks to be some parabolic umbrellas.

Check it out here and see how high of a score you can get:

The adaptation is based on the version of Space Invaders put together by Alonso Vidales. The camera icons were provided by Billy Brown, and the umbrella shields by sylights.

So far, the best score shared in the DIYP comments is 1580 by Mr. Jakes Koen. We’d love to see one of the PetaPixel readers take that score down, so give it your best shot and share your high score in the comments … if you’re brave enough.