The crowd surfing blow up ball at a concert isn’t a new idea, but late last year HP and Almap BBDO took it in a new direction. As part of HPs “Making Memories Last” campaign, the company fit one of the massive concert beach balls with a high-definition camera and WiFi antenna.

HP came up with and implemented the beach ball idea at the massive Sao Paolo music festival Planeta Terra. During the concert, the ball was set loose on the crowd where it was treated like any other giant inflatable ball, only this one took pictures and video. 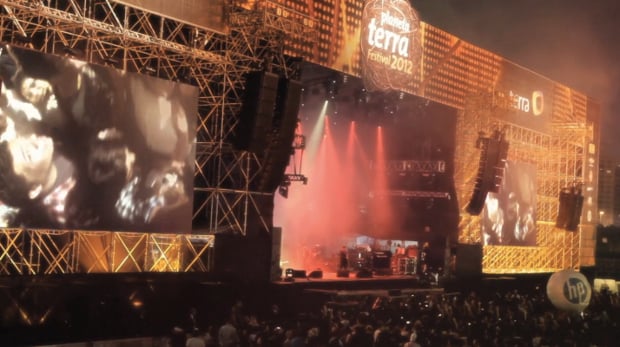 It was kind of like setting up a photo booth where no photo booth was possible. Video from the camera was occasionally streamed live to the massive screen on either side of the stage, while the photos the ball took were uploaded to several places at once.

Concert goers had the chance to go print out photos of themselves (assuming they could find them) at the HP booth, but those not in attendance didn’t need to miss out. Photos from the ball were also uploaded directly to HP’s Facebook fan page where people from all over the world could try to spot their friends.

Check out the video at the top to see HP’s Photoball in action. Fair warning: the video streamed directly from the ball can get a teensy bit nauseating if you get motion sick.

FlexCam is a Flexible Camera that Snaps Dynamic One-Shot Panoramas