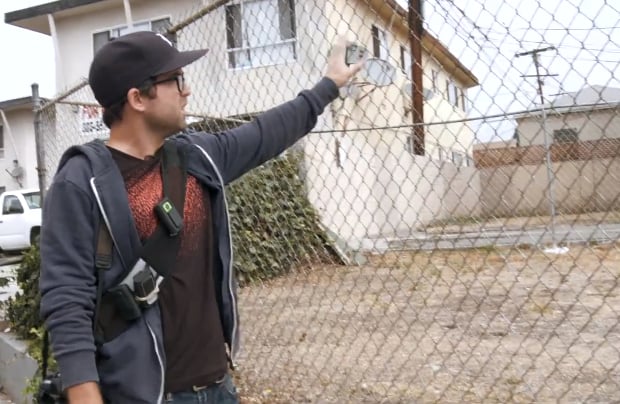 Photographer/rights crusader Shawn Nee is back in the news, this time after he was detained and handcuffed by Los Angeles police for “interfering with an investigation” while taking photos in a public place.

The incident took place June 2nd, but only recently came to light when libertarian magazine Reason released the following video in which they talk to Nee about the altercation and show some of the footage he captured on a body cam as it was happening:

Nee said he was taking photos of a homeless man whose life he has been documenting for five years, when police showed up at a nearby apartment building to handle a domestic dispute.

Nee started using a body camera to capture video of the police — from a public sidewalk 90 feet away and behind a chain-link fence — when an officer approached him and asked, “is there any reason why you’re filming people?” Nee identified himself as a working photographer but declined to give his name or employer, after which the officer arrested him for “interfering with an investigation.”

Once detained, he continued to refuse to tell the officers about the nature of his work — saying “my understanding is that I was detained for taking photos in a public place” — and was eventually taken to a police station, where he was held for about an hour before being released without charges.

An LAPD representative said the department isn’t investigating the incident, as no formal complaint has been filed.

Nee has been embroiled with LA police in photographers’ rights cases several times before. In 2009, he was arrested for photographing in a Los Angeles Metro station, with an officer telling him, “Al Qaeda would love to buy your pictures, so I want to know if you are in cahoots with Al Qaeda to sell these pictures to them for terrorist purposes.”

In a 2010 incident, he sparred with police over his right to document their actions. And in 2012, officers on Sunset Boulevard detained him for taking photographs of minors and/or not carrying identification.

(via Reason via LA Weekly)