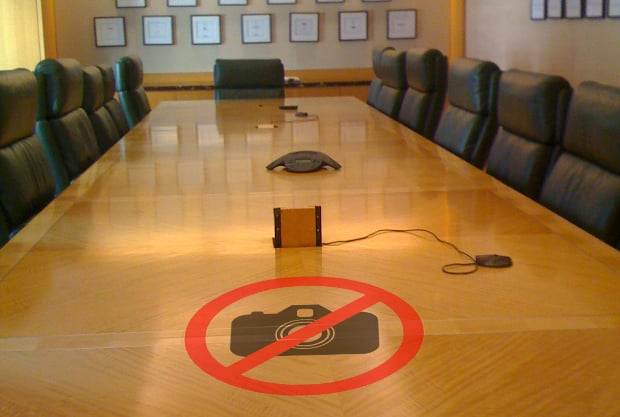 Next time you’re in a big corporate meeting, particularly one that concerns impending layoffs at the company, it might be a good idea to keep your camera in your pocket. That’s the lesson Patch Creative Director Abel Lenz learned yesterday when he was unceremoniously given the boot while about 1,000 of his coworkers listened in on a conference call.

Patch, in case you’re unfamiliar, is an AOL-owned news network that focuses on local news and has been struggling to stay afloat. In a meeting about the future of the company in which AOL CEO Tim Armstrong announced hundreds of impending layoffs, Creative Director Abel Lenz pulled out his camera, supposedly to take a photo of Armstrong.

According to an Atlantic tipster, what happened next went something like this:

“Abel, put that camera down. You’re fired. Out,” Armstrong said. After a pause of about five seconds, he then continued the call as though nothing had happened.

Then after about five more minutes of talking about whatever, he threw in “and the reason I fired Abel before was I don’t want anyone taking pictures of this meeting.”

Afterwards, Armstrong reportedly explained a bit further by saying that media leaks were making Patch look like “loserville,” and that Lenz was fired because “we can’t have people that are in the locker room giving the game plan away.”

If media leaks are making Patch look bad, we wonder how Armstrong feels about this particular story getting out…

Update: Jim Romenesko has published the audio from the conference call (the firing is at the 2-minute mark):

Image credit: Photo illustration based on board room by @MSG and 151893386CF016_TechCrunch_C by TechCrunch