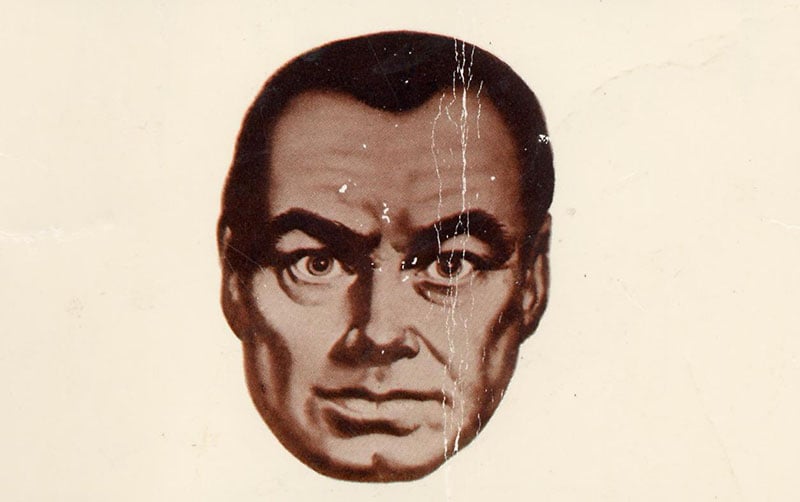 Imagine, if you will, a secret week-long conclave held in a trendy Northwestern city renowned for its adherence to a strict social order. The walls of the luxuriously appointed host establishment are covered with hundreds of photographs immortalizing moments in the glorious lives of supreme leaders and other luminaries past and present.

Called by The Company to this comfy confab from their ivy covered posts around the country are a score of carefully selected elite intellectual sycophants, chosen for their expertise in efficiently disseminating propaganda to the most highly impressionable members of a great unwashed populace. They are here for the sole purpose of mass reeducation and indoctrination into its Master Plan for World Dominance.

At their feet are Company branded black bags overflowing with gewgaws, thickly bound manifestos, uniform apparel and other tawdry SWAG provided as further enticement to simply listen up and do as they are told, which of course they all do without hesitation. Closest to you, another, smaller group is arrayed in a straight line at tables behind the audience. They are The Watchers.

Like the others in attendance, each sits behind a computer with a tent card bearing their name in bold type. Kelly, Kathy, Tom, Sharad, Bob, familiar names to those who read splash screens and web tutorials. They are all sitting, tapping softly at their keyboards, all except for one.

Watcher Bob is standing in the half shadows, stoic and unsmiling, focused like a laser on a screen at the front of the room. He appears to be the Man In Charge, although, paranoid by nature, you know that appearances can be deceiving.

You follow his gaze and then cover your mouth with one hand to muffle a small gasp. Slides are being projected that tick off the details of a frightening New World Order as envisaged by The Company.

And then you see her. Known simply as “Julieanne” to those in the room and to her worldwide legion of toadies, The Company refers to her formerly as The Evangelist. But to those of your ilk, she might as well be called Big Sister. Her message is as bitterly reviled by you and yours as any doublethink Winston Smith had to endure.

As you watch, The Evangelist moves from a seat behind her digital alter to emphasize a bullet point on the screen with a powerful, leonine grace. She is smiling, but her pleasant affect cannot hide an underlying intensity. Surely, she could crush a Volkswagen with little more than an icy glance. 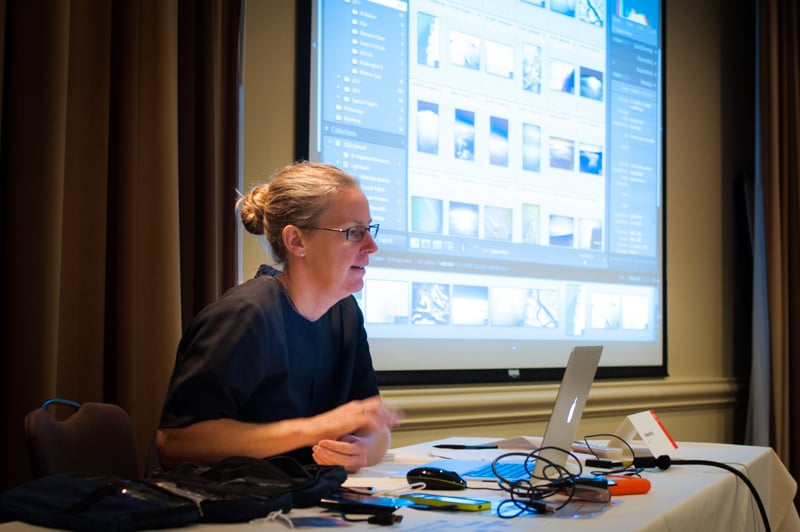 She is tall, Amazon tall, and by her manner of dress presents the perfect paradox of high priestess and common prole. A sleekly tailored, black smock over blue jeans, western boots and horizontally hip spectacles seem to declare “I am like you, but not one of you”. Her trademarked long, white-blonde tresses, silken and flowing in The Company’s ubiquitous Official Portrait, today have been garroted into a severe knot on the back of her head.

“That’s gotta hurt” you think to yourself.

She prowls the front of the room, speaking passionately in a language not unlike yours but peppered with technological phrases and buzz words. “CC!” she repeats over and over again in differing contexts. “Compressed DNG! Smart Previews! Radial Tool! Upright Adjustment! Content-Aware! Camera RAW Smart Filter! Behance!”

With each new exclamation, an excited acknowledgement rises from the audience of twenty that calls to mind an olde-timey tent revival congregation’s communal “AMEN!”

“Yes!” they exclaim as one, nearly swooning in ecstasy. “We love it! More like that!” And even “Wow!” from one chrome-pated graybeard seated in the front row.

The Evangelist continues. “And video, too, which, frankly, I am not as personally excited about, but which I will now demonstrate for you nonetheless.”

The audience hangs on her every word, and waits in fidgety anticipation.

But somethings seems to have gone horribly wrong. Her brow furrows as she taps repeatedly at her keyboard. After a few moments, she looks up at Watcher Sharad in the back of the room. “CC just crashed” she reports. “What’s up with that?”

“If you marginalize features of the application while we Product Managers are in the room, stuff will happen.” Watcher Sharad smiles thinly from behind his computer, and the room erupts in laughter.

The Evangelist is laughing, too, but is that an almost imperceptible nervousness you detect? Perhaps a chink in her armor? Both she and you look over at Watcher Bob, stoic and unsmiling in the half shadows. He nods slightly, apparently signaling for her to proceed.

She composes herself and stands. The mood in the room darkens now with her next pronouncements, posed as interrogatories in a lower voice this time. 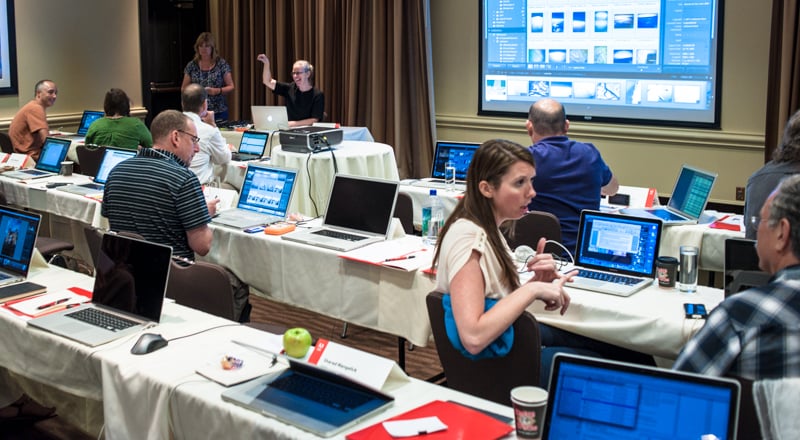 Enthusiasm changes to discord as the participants now seem evenly split between the yays and the nays. The almost liturgical call-and-response you witnessed just moments earlier has become a hot-blooded point-counterpoint debate.

“We’ll have perpetual payments!” / “We’ll always be running the latest and greatest versions!”

“They’ll jack up the price whenever they feel like it!” / “Not if they want to keep us from going to the competition, they won’t”

“But there is no competition! They’re the industry standard!” / “Just wait. This should encourage competition and further innovation, which will be good for everybody.”

“I won’t be able to decide if and when I want to upgrade!” / “You won’t ever have to worry about keeping current with upgrades again!”

“My fine art photo students can’t afford it, even with the EDU discount!” / “C’mon. They spend more than thirty bucks a month on skateboard modifications alone!” 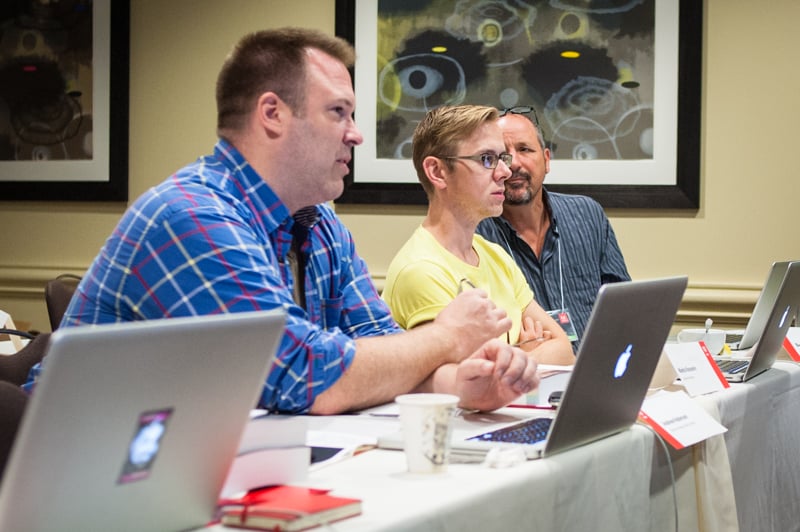 And on and on it goes, 15, 20, 30 minutes or more. As each cogent point or promising suggestion or feature request is made, The Watchers record every bit of it for detailed evaluation and potential implementation later.

“Impressive,” you say to yourself softly. “They are listening and responding to their users in real time.” Then, unable to believe what you just heard yourself say, you shake off such contradictory thinking.

Finally, The Evangelist brings all the unruliness to an abrupt end with the tinkle of a delicate white porcelain bell.

“Excellent. I think it’s time we take a bio-break”, she declares. “Ten minutes.”

Without warning, she then turns and locks eyes with you. A cold chill runs up your spine as you realize she has been aware of your lurking presence from the get-go, and still she allowed you to watch and listen. As if she wants even you, too, to learn.

The Watchers turn away from their keyboards and look up at you. They are smiling. Indeed, all those in the room have now turned and are smiling.  All, that is, except for Watcher Bob. He remains in the shadows off to one side, stoic and eerily underlit by a nearby computer screen. He is unwrapping a York Peppermint Patty. He does not smile.

“Come in!” Watcher Kathy chirps, arms outstretched. “Welcome! Have you heard the good news? About the Creative Cloud?”

“NO!” you scream. “NEVER!” You slam the door and nearly trip over your own clumsy feet as you exit, stage left, without even so much as a backwards glance.

You are fearful that you have been fatally bamboozled by the intelligence of the debate, by the sincerity of the response, and by the Siren song of The Evangelist’s beauty and brilliance even from just this one brief exposure.

You tear through the streets of the free ranging, coffee swilling, vegan noshing socialist utopia now, running past Zip Cars and shared bicycles and community gardens and AirBnB pied-a-terres in a desperate search for the antidote to what is now clearly yet another one of these RADICAL NEW IDEAS.

You seek a return to the bygone days of yore, a time when all could be had on your terms alone to do with as you pleased, whether by hook or by crook and often for free.

You seek your Precious, that which you could have and hold (and loan to your brother-in-law). You seek the glittering, circular vestige of What Always Was And Still Should Be.

You seek The Hard Copy.

But there will be fewer and fewer to be found in this brave new world of software subscriptions and monthly re-ups. So you Gimp off to the lands of Nik and Bibble, and you curse The Cloud and howl at the moon, all to no avail. No way, no how, no disc, no more.

Author’s note: I just returned from the 2013 Adobe Educator Summit in Portland, Oregon. In case you can’t tell, I found it to be a very important and enjoyable experience. Our home for the weeklong event was the beautiful Hotel Lucia, where, coincidentally, we were surrounded by their amazing collection of over 600 prints from the archive of Pulitzer Prize winning photojournalist David Hume Kennerly. He was an early hero of mine when he served as Gerald Ford’s official White House photographer. 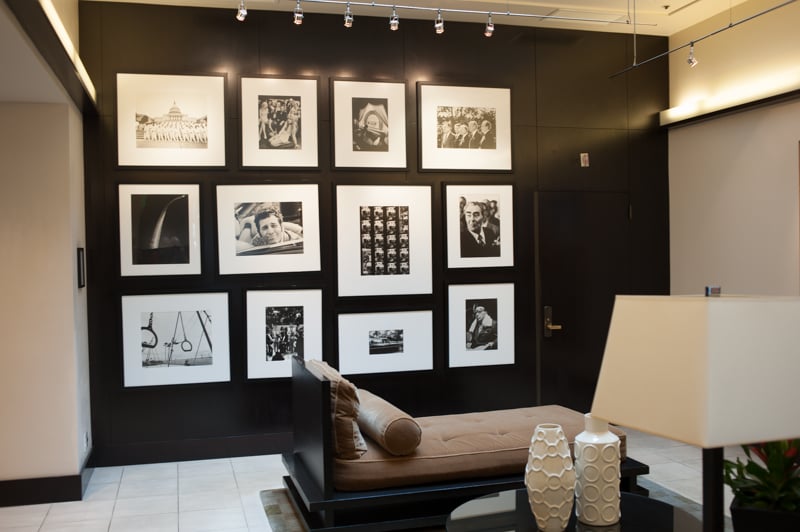 As one of 20 college-level photo instructors invited to participate in the intensive workshop, I can’t praise presenter Julianne Kost and the Lightroom/Photoshop management team highly enough. They were authoritative, entertaining, thoroughly gracious hosts, as well as a real kick to be around (and I’m not just saying that because I got a free hat and T-shirt out of the deal, but they had me with the hat). While I have obviously used considerable creative license in my recounting of the event here (and I hope my hosts are not offended by my characterizations of them), I have tried to remain faithful to how we addressed the controversy over the Creative Cloud. We’re all trying to figure out what it means for us, too. 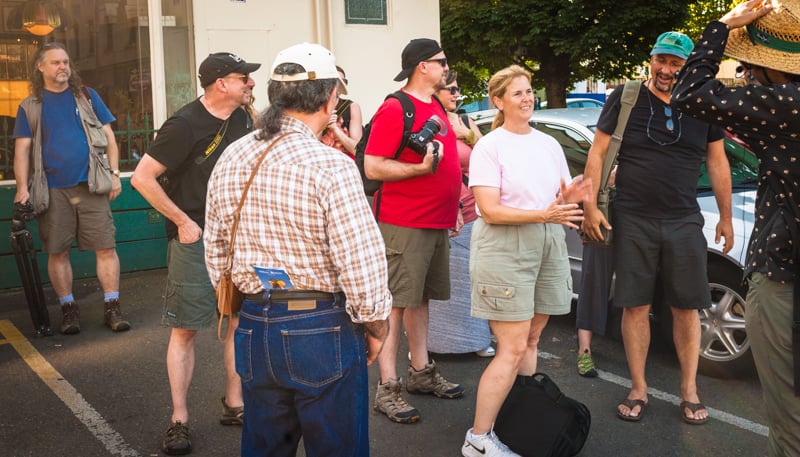 Personally, I see it as a reasonable, logical, and welcome evolution (they had me with the hat, remember?), albeit one with issues. As educators and administrators, however, my colleagues and I all seemed to agree that implementation is going to be tricky. 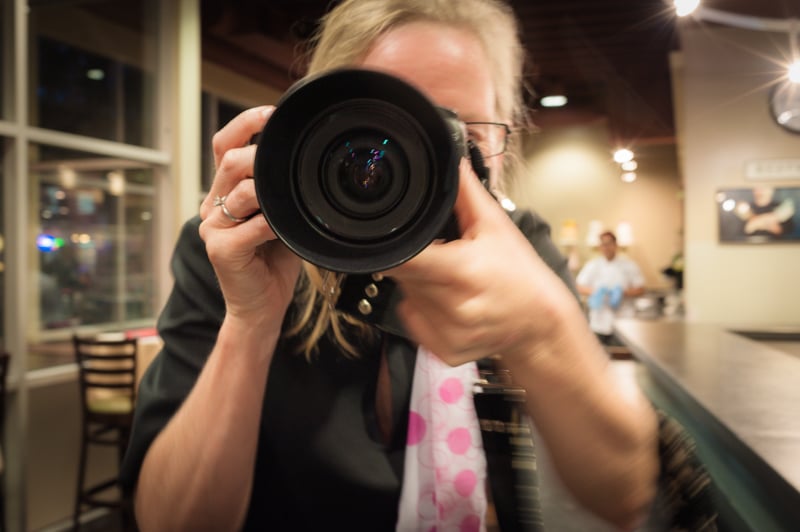 But I look forward to the day when I can report back to Julianne and her team that my students, my faculty and my school are all, in the words of an air traffic controller and former student of hers, “sittin’ on GO, m’am. We are sittin’ on GO.”

How to Open Up and Clean Your iPhone 5 Camera