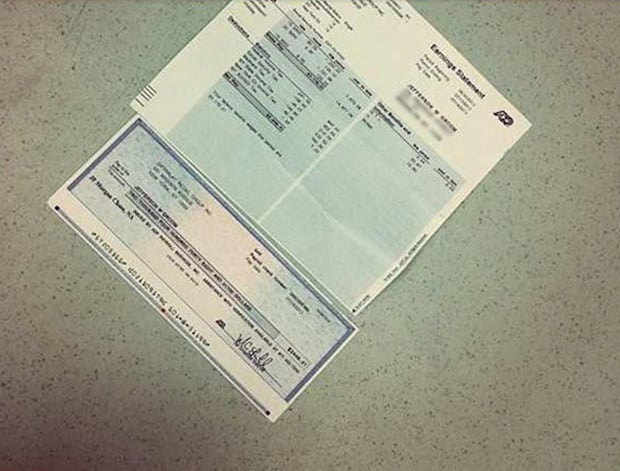 Social media have opened all sorts of avenues for getting in trouble at work, from oversharing workplace gossip on Twitter to old Facebook photos showing bosses parts of your past not covered on your resume. But here’s a relatively new one: Showing the world what your paycheck looks like.

That’s what Wade Groom, a sales clerk at fashion house Lacoste’s main store in Manhattan, did, earning a swift trip to the unemployment office.

Groom snapped an image of his paycheck a few weeks ago and posted it to Instagram with the message: “Ever since I was a kid I’ve thought it was completely insane that we have to work all our lives. I still feel that way. Especially when it’s only enough to live in a third world apartment…” 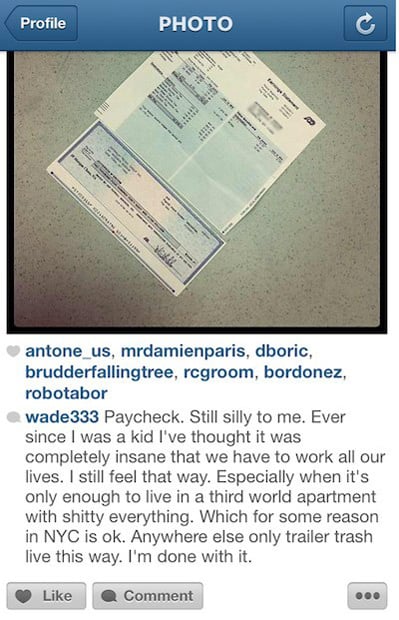 After a few weeks of bumping around the mediasphere, the image eventually became know to Lacoste managers, who told Groom that the posting violated the confidentiality agreement he signed before going to work for Lacoste. And don’t let the door whap your butt on the way out.

Groom told Gothamist that he really didn’t intend to complain about his salary — $15/hour, plus a 3% commission on record sales numbers — as much as make a philosophical statement about the old grind. And he sure didn’t expect it to go semi-viral. “I assumed that people would understand that I’m just expressing my frustration through my private Instagram account,” he told the blog. “Had I know it would have gotten out like this, I never would have done it. ”