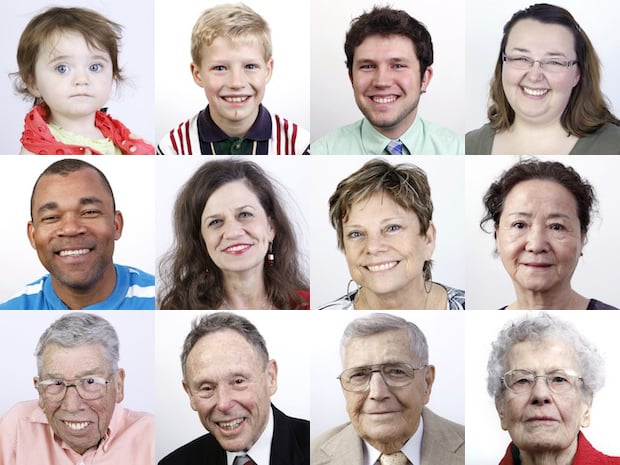 Every age has some unique insight to offer. That’s the basic idea behind the project 100 Ages, A Century of Voices by graduate students Katie Alaimo and Alyssa Goodman from the University of Missouri. The duo photographed and interviewed 100 Boone County residents from age 1 to age 100 and are now sharing those peoples’ stories through the project’s website.

What started out as a major project for school became so much more. “We ended up with a cross-generational catalogue of the stories and diversity of our community,” Alaimo told us in an email. “The project is something special, something that hasn’t (to my knowledge) been done before, and that we want to share with as many people as possible.”

Every subject got their own portrait and video interview, which can be found on their individual pages on the website alongside a profound or humorous thing they said. One-year-old Evangeline Perreault shared a thought-provoking “Yes. No. Yes. Yes.” While 99-Year-old Marge Nathe showed her determination when she said, speaking about her mother, “She was 102 when she passed away. I said I’m gonna beat her.”

Each member of the community that entered the studio knew they were representing their age, but not everyone realized just how meaningful the experience would wind up being.

The project reminds us of the 1 to 100 Years Project by Belgian photographer Edouard Janssens and this 150 second video by Dutch filmmaker Jeroen Wolf, which captured the same 5050 years of life in video form. A Century of Voices simply goes more in depth by attaching a story to every portrait.

To see all 100 portraits/interviews and find out more about the project itself, head over to Century of Voices website by clicking here.