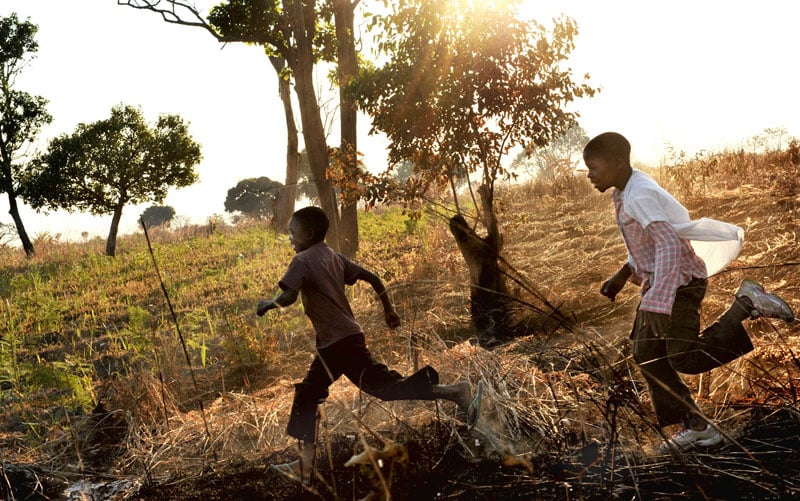 My first African experience began at age 17 when I won the 1974 Kodak/Scholastic National Photography scholarship which included a studies program to Kenya and Tanzania. For a teenager, it was an eye-opening revelation. Back then I was working an illegible night shift cooking burgers at Jack in the Box while going to high school. It was a tough gig but it made a new Nikon lens possible every couple of weeks.


Africa would be my first big taste at international travel and it left a profound impact that would carry me on to my future career as a photojournalist. I recall taking a single Nikon FTN camera without any backup along with a Nikkor 24mm, 60mm macro, 105mm and 200mm F4.0 lens and a ton of Kodachrome 64. The trip was amazing and for a month I was chasing herds of zebras in the Serengeti and swimming in the waters off Mombasa.

It would be 34-years before I would return to the “Dark Continent” and of all places Uganda with a band called UB40. Somehow I had befriended the band in 2003 during their world tour stop in Tahiti. Through the years I closely documented the group and in 2008, I followed the band to Australia and Uganda eventually photographing their album cover TWENTYFOURSEVEN. It was a fast-paced tour around Kampala.

At one point I was bewildered at seeing the ocean because I did not recall Uganda being on a coastline. As I tried to rationalize that I was really in Uganda and not some other country, it hit me. It was Lake Victoria which I had read about so many times in school and seen in old movies. How I wanted to explore more but when you are being shuffled from venue to venue with a famous band and entourage of reporters and police escorts, street photography is pretty much out of the question.

Africa started tugging on me again last year and when an opportunity to join an NGO to Angola surfaced, I quickly seized the opportunity. Non-government agencies like the Red Cross and Amnesty International offer a way for photojournalists to see parts of the world completely closed off to the average traveler. A Chicago-based NGO, a non profit organization that builds schools in Angola, allowed me to join them in July to document their work.

After doing some research, it was clearly apparent that this would not be like Kenya and Tanzania with safaris to exotic game parks. The decade-old civil war had killed off most of the major wildlife and access to the country proved complicated at best. Photojournalists are generally denied access and the only way for me was to enter the country under a humanitarian visa.

I had to smile looking at the pile of gear on my bed in preparation for my flight to the capital city Luanda. Camera equipment sure had changed since 1974 with Nikon digital D700 bodies and VR stabilized zoom lens covering the task yet there was something comforting with the yellow packs of Tri-X film along side the Leica M-7 bodies.

If I had my way, it would have been a total film trip but the NGO was better suited to digital. The problem was that juggling my love of film with digital doubled my burden with weight and baggage. This had not been much of a problem in the past but the harsh conditions of Angola pushed the limits. At 57, I am not as nimble as I used to be and I soon realized the trip would be harsh.

The game plan was to get down to Angola, shoot as much as possible before catching malaria, yellow fever or end up being arrested or detained. Angola is a beautiful wild and dusty nation but a challenge for any daring tourist. The drive from Benguela to Luanda was slowed by at least 14 armed police road blocks of which many involve bribes to continue the journey. Fortunately for our team we got lucky while payoffs could clearly be seen out the car window with less fortunate travelers.

As with my tour with UB40, this trip would also prove limiting in roaming the country and making pictures. The daily routine of driving through desolate areas to small villages and checking progress on the many schools was time consuming. Our team often got stuck in back roads and had to hand push the vehicle. Another truck followed caring hundreds of pairs of donated shoes.

After documenting the daily needs of my NGO, I tried my best at photographing the surrounding areas. At times I could only shoot from a moving van. The lighting was harsh and I soon found myself using fill flash. Fortunately the Nikon D700 worked beautifully in this regard as well as my lenses which consisted of Nikon 14-24mm, 24-70mm, 70-200mm and an 80-400mm. Dust was gathering everywhere on the gear, clothes, food which did not necessarily bother me too much but when the red clay started invading my Leica M7, 28mm Summicron and 50mm Summitar, I soon packed them away. It was impossible juggling two systems anyway.

After about 10 days of exhaustive work, I finished a pleasant dinner in the village of Chilonda. The power generator normally shut down nightly so when my stomach started to summon me, I grabbed my flashlight to check the time. It was 0200 and I had a terrible cramping sensation. I thought, “Ok, here it is”. What had I eaten? The chicken was pretty burnt. Surely the potatoes were OK. The river water was boiled…or was it?

I tried to put the unpleasantness out of my mind and go back to sleep. It’s just amazing how fast one can find a zipper and egress a mosquito net in total darkness. I had accidentally dropped the flashlight and ran blindly for the toilet. Most of the bathrooms in Angola have no running water so I had to feel my way along the rim next to a large bucket of water.

After a time, I started crying like a tortured POW.

The 5-hour sickly serenade concerned the team but there was little they could do except offer a flashlight for better aim. The experience drained me physically for three days. It was the worst experience I had ever suffered outside India. There was little clue as to what caused the African initiation. There were no hospitals in such a remote location but fortunately I endured.

The people of Angola were charming and heart warming. After years of Portuguese repression, they could still greet foreigners with a smile. But after two weeks of dusty trails, a regular diet of bread and mystery stew, I was definitely looking forward to Germany, a hot shower and my Snickers bars.

About the author: Jeff Widener is a Pulitzer Prize-nominated American photojournalist who’s best known for shooting the photo “Tank Man“. He has documented wars and social issues in over 100 countries, and was the first photojournalist to send digital photos from the South Pole. You can read our recent interview with him here. Visit his website here.

Image credits: Photographs by Jeff Widener and used with permission

Primelapse Brings Together Quality Time-Lapses from Around the World