The world of photography holds many untold stories of men and women who had a profound impact on the lives of the people on the other side of their lens. One such man was Dublin street photographer Arthur Fields, and an Irish production company wants to tell his story, with a little help from you.

For 50 years, Arthur Fields worked 7 days a week and 365 days per year taking pictures of people on Dublin’s O’Connell Bridge. It’s estimated that he took approximately 182,500 photos over the course of his career, and many a Dublin resident has an Arthur Fields photo buried somewhere in their archives. 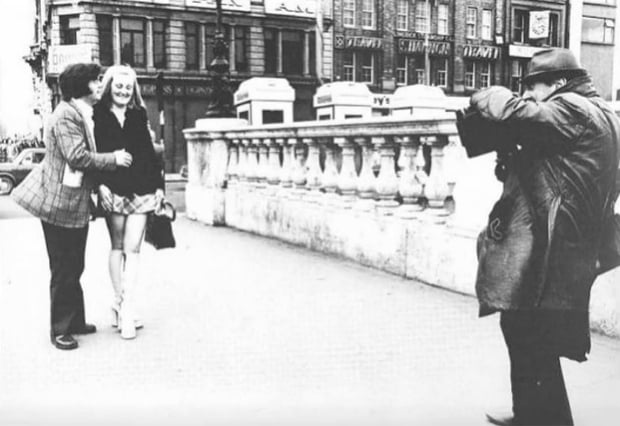 Dublin-based production company El Zorrero Films believes this is a photographic tale worth telling, and so they’ve embarked on a mission to put together an interactive online documentary that tells the story of Fields’ life by sharing his work and speaking to the people whose lives he touched.

“Combining video, archival still image, text and audio, Man on Bridge will allow users to explore both Arthur’s life, the photos he took and the impact his images have had on the lives of others,” explains the production company on their website. “[The documentary] aims to remind users how important touchstones like Arthur are in the social fabric of a city.” The video at the top is a short snippet showing what the final documentary might end up looking like, but in order to receive the funding they require to produce a full-length product, they need your help. In addition to a request for submissions of Arthur Fields and Arthur Fields inspired work, they’ve entered the idea into the Arthur Guinness Projects competition.

If Man on Bridge receives enough votes to win the competition, the Arthur Guinness Projects will fund the documentary and El Zorrero Films will get to share Fields’ story with the world.

To learn more about the documentary, and the production company’s plans going forward, head over to the Arthur Guinness Projects website and cast your vote.

Primelapse Brings Together Quality Time-Lapses from Around the World