Dominic Holden is the News Editor for the Seattle area newspaper The Stranger, and he was recently threatened with arrest and workplace harassment by some local police officers for standing on a public sidewalk and taking their picture.

The incident took place two days ago at Fourth Avenue South and South Jackson Street when Holden, who was riding his bike, came upon a group of officers speaking loudly at a man sitting down in the King County Metro’s International District Station plaza.

As a reporter, his first instinct was to get his cell phone out and snap this photo: 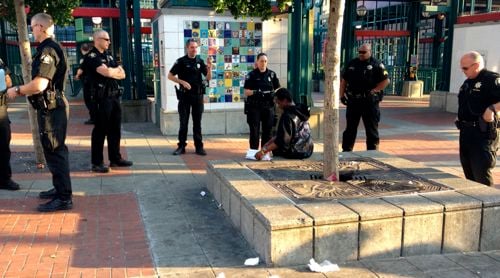 Once the man got up and left, one of the officers noticed Holden and his camera, and Sergeant Patrick “K.C.” Saulet of the King County Sheriff’s Office immediately rushed over to tell him to leave or be arrested.

“Commuters, shoppers, and vagrants were milling about the sidewalk and plaza — some people were passing closer to the center of the police activity than I was,” writes Holden. “But I was the only one on that busy block told to leave (the guy watching the police and taking their picture).”

The altercation escalated from there, with officer Saulet continuing to threaten Holden with arrest even after he had stepped back off of plaza property and onto a public sidewalk. Although he was fairly certain he was well within his rights, Holden eventually rode his bike across the street as he had no interest in being arrested.

When he then attempted to find out who was in charge, Seattle police officer John Marion refused to answer his questions, asked Holden for his business card, and threatened to go to Holden’s office and “bother you while you’re at work.” Fortunately, although officer Marion did become physically agitated, nothing escalated into physical violence.

Although he admits this is a minor altercation relative to some he’s heard of/reported on, Holden is spreading the word because “minor incidents like this shouldn’t be happening in the first place — and some minor incidents turn into major incidents.” He continues on to say that he “bet[s] this sort of harassment happens every day,” he just happens to have a platform from which to spread the word.

Speaking with King County Sheriff’s Department spokeswoman Sergeant Cindi West afterwards, he was told via email that “in general a person cannot be ordered to stop photographing or to leave property if they have a legal right to be there.”

He has been asked to file a complaint with the county sheriff’s office (which he intends to do) and the SPD’s Office of Professional Accountability has already gotten in touch with him regarding officer Marion’s conduct. He has promised to write about the disciplinary process itself as he continues to work with the Accountability office.

Head over to The Stranger for a full, in-depth account written by Holden himself.

Image credit: Seattle Police Office by City of Seattle. Photos of the scene and officers Saulet and Marion by Dominic Holden.

Painting a Large College Dormitory with Light for a Nighttime Photograph

PSA: Keep Your Camera Away From Your Face in Rough Waters