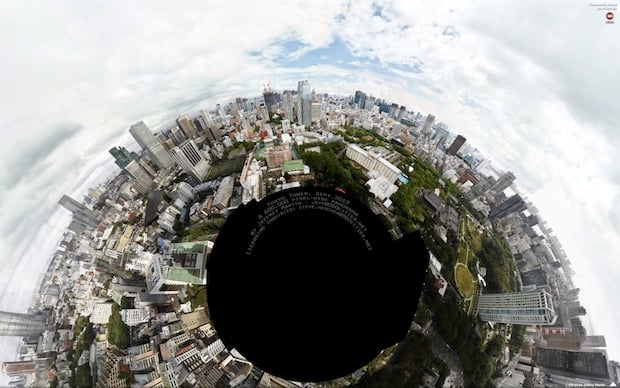 Do you remember the 320-gigapixel photo taken from atop the BT Tower in London? That 360° panorama, shot by Founder of 360-cities Jeffrey Martin, holds the title of world’s largest photo. But just because you have the top spot, doesn’t mean you have to stop.

Another of Martin’s creations, this one shot from the lower observation deck of the Tokyo Tower, has earned him the number two spot as well.

Like the London panorama before it, this 600,000-pixel wide behemoth was shot with a Canon 7D and some robotic help. In London he had 7 cameras to work with, this time he only used one. His trusty 7D and 400mm f/5.6L lens were mounted on top of a Clauss Rodeon VR Head ST robotic panorama head and set to work for 6 hours split between 2 days.

In all, the final panorama consists of 10,000 photos stitched together by a 12-core Fujitsu Celsius R920 workstation that needed 192GB of RAM just to handle the load — and even it needed 12 weeks to process the creation embedded below:

You have to click here for the full-res version, and once you do, the detail is likely to blow your mind. From 20 stories up, you can pick individual people out in cars, see what folks are doing over on the track, and practically sit inside not-so-nearby office buildings.

In all, it only weighs in at 180-gigapixels as compared to the 320 the London photo boasts, but that’s still nothing to scoff at. If printed at regular resolution, the print would stretch out about 328 feet long and 164 feet tall.

Here’s a video Martin put together to tour you through some of his favorite pieces of the pic (note: there are a few discrepancies between the numbers he cites in the video, and the ones we got from the press release):

Interestingly enough, the image has never existed as a single file. Even Photoshop can only handle images up to 300,000 pixels wide. The version you see above and on the website consists of millions of individual image tiles loaded on an as-needed basis depending on where you’re zooming in.

Click here if you would like to read our previous coverage on Martin’s significantly larger — though, in his opinion, not as interesting — London panorama. And if you want more information on this 180-gigapixel creation, head over to 360cities and browse Tokyo to your heart’s content.