You’ve seen timelapse videos, and maybe even hyperlapse videos, but what about a juggle-lapse one? That Juggler Guy recently took his juggling balls and a GoPro camera on a trip around Iceland. What resulted is the mesmerizing video above in which the juggled balls are used for cuts between clips.


The juggler says that the camera was mounted to his chest for most of the video (at least one of the shots required a head mount). His journey was around Iceland’s Ring Road, a 830-mile highway that circumnavigates the entire country.

It’s a road trip that “has TONS of opportunities to pull off and see whatever piques your curiosity as you’re driving,” he says. To locate areas worth including in the video, he bought a map of Iceland in Reykjavik (the capital city), asked some locals where to visit, and ended up circling a large number of locations. 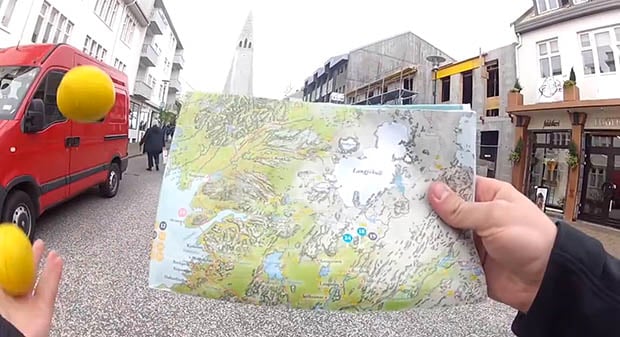 Although people can spend weeks on the Ring Road, the juggler went around the whole thing in just four days for this video. The entire project spanned seven days and cost roughly $1,500 from start to finish.

Once he had the footage he needed, everything was edited into the final piece using Final Cut X. That Juggler Guy says he’s now in Hawaii and plans to film similar juggling footage while sitting in a helicopter.