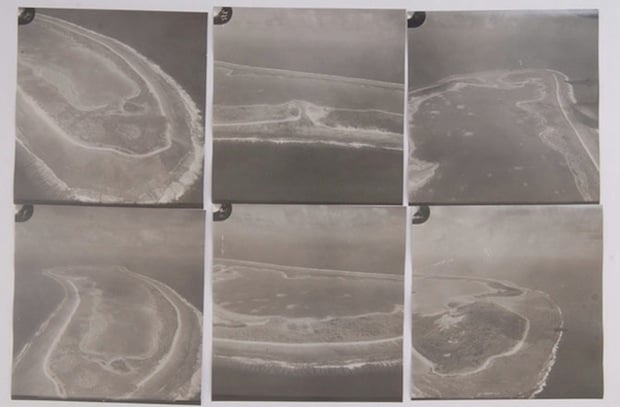 More than 75 years ago, aviator Amelia Earhart disappeared not far from the completion of her record-breaking attempt to circumnavigate the Earth at the equator. The wreckage of her plane was never found, and many believe that what’s left of that wreckage is still somewhere at the bottom of the Pacific ocean.

Another theory, however, is that Earhart and her navigator Fred Noonan made an emergency landing on the reef surrounding the yet uninhabited island known as Gardner Island (now Nikumaroro). And some recently found aerial negatives of that island might hold to key to proving this theory right.

The negatives in question were discovered by Matthew O’Sullivan, the keeper of photographs at the New Zealand Air Force Museum. Buried in the museum’s archive, O’Sullivan found a box containing five sheets of contact prints, complete with negatives. That’s a total of 45 large format photos.

The International Group for Historic Aircraft Recovery (TIGHAR) has been hard at work for some time now, trying to figure out exactly what happened to Earhart and her Lockheed Electra. And in addition to scouring the Pacific floor with high-tech sonar equipment and submersibles equipped with high definition cameras, they can now bring in photography expects to scour the tiny tropical island.

The photos were taken December 1, 1938, some 15 months after Earhart and Noonan disappeared. Their plane, it’s thought, did wind up in the ocean. But the negatives might hold evidence that the two made the island their home for as long as they managed to survive.

Executive director of TIGHAR, Ric Gillespie, is a little more than hopeful. Even if they don’t find anything in the photos, this is a very promising lead that could forever confirm or put to rest one possibility.

“We will be working not from a third generation print but from the original large-format, fine-grained negatives,” said Gillespie speaking with Discovery News. “In our fondest dreams we couldn’t have wished for something like this.”