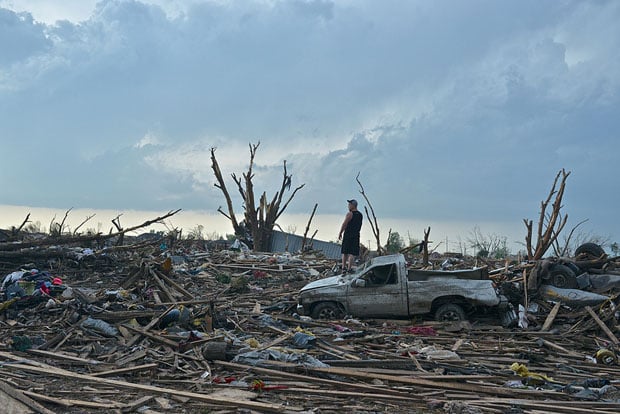 In Oklahoma, tornados are a common thing. Every spring they occur and every Oklahoman grows up knowing what they are and the damage they can cause. As a native Oklahoman, I’ve only seen two tornados in person after chasing them down. Most of the time they do little damage and dissipate fairly quickly. People are usually more worried about damage that comes from the gigantic-sized hail than from tornados.

On May 20th, 2013, a 1.3-mile-wide tornado hit Moore, Oklahoma, about 10 miles away from my house. It was on a path heading North East slowly. I was watching the radar closely with my girlfriend, as we always do when the sirens go off. We saw footage of the tornado ripping across the urban terrain.

I decided to travel to the location afterward to photograph the devastation. Only my girlfriend knew. I did not know what to expect. As I was leaving my house, the sirens rang again.

I ran back inside one last time to check the radar. As far as I could tell, the tornado was passing Interstate 35 and it was safe for me to head south. I left and arrived 30 minutes later.

After passing through hail and flooded roads, I parked my car and walked 45 blocks to where a farm had gotten hit. As I was coming around to the entrance of the farm, I could hear gun shots. It puzzled me at first, but as soon as I got closer I realized the livestock was still alive.

The first thing I saw as I passed through the farm entrance was miles of shredded wood and piled up debris, as far as my eye could see.

As I walked closer, I found the first dead horse. I stepped back to think about whether I should continue further. I then thought, “I’ve come this far, I can’t stop now.”

My camera was in my bag, and I figured that I should start shooting to document the scene. In a way, it was a relief. I was able to look at everything as an image, rather than the horror that was directly in front of me.

The farm was the most gruesome. Dead livestock were everywhere. Literally piles of them. It was overwhelming for me, but I pushed on. 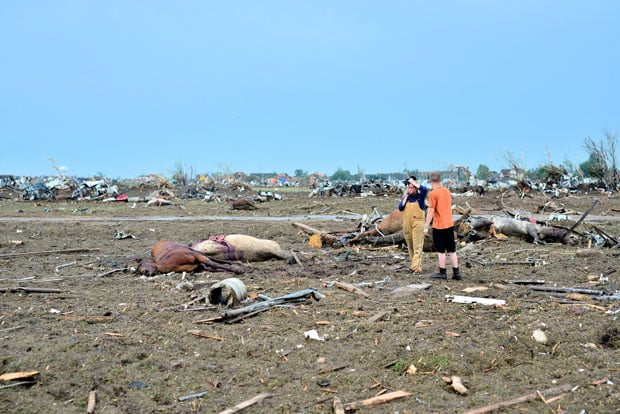 I had an idea that I would try to follow the path of the tornado as much as possible, and that’s what I did. 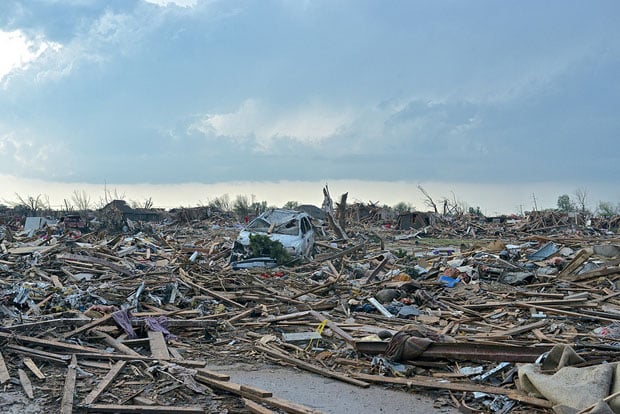 The next hour and a half was nothing but watching my step and shooting what I saw. I tried to remain respectful as best I could, staying on the streets and off people’s property. 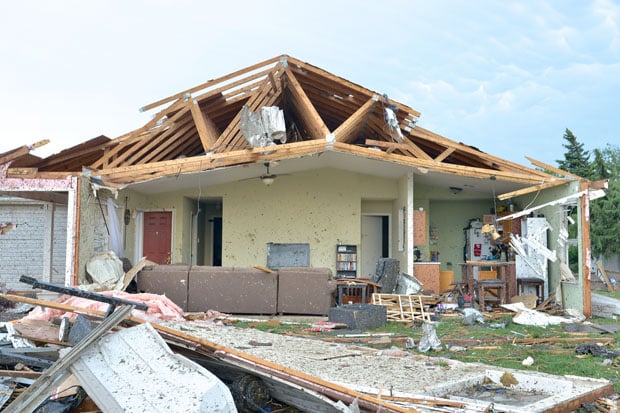 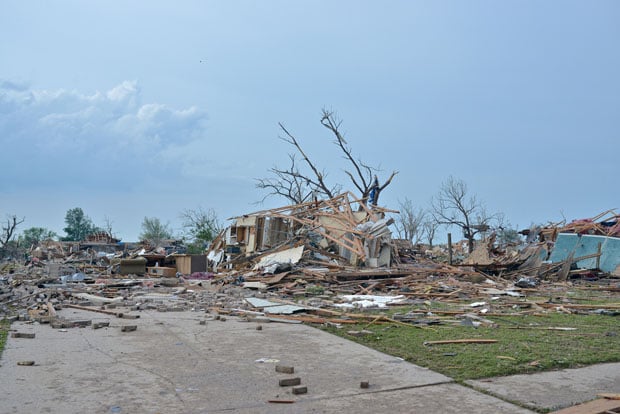 At one point, I came to a dead end and a boy that lived on the street took me behind his house to show me how to get around the many road blocks. From there I was able to access the most decimated areas of the neighborhood. 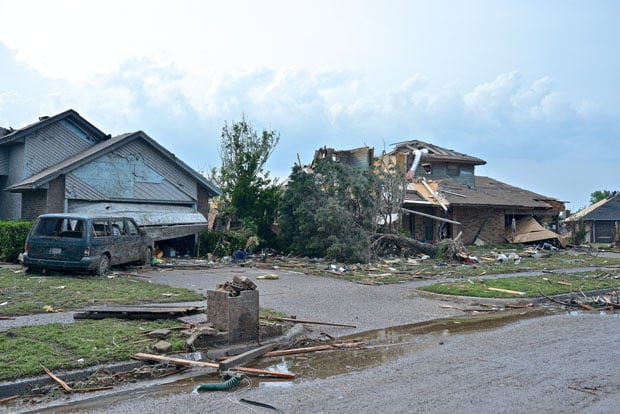 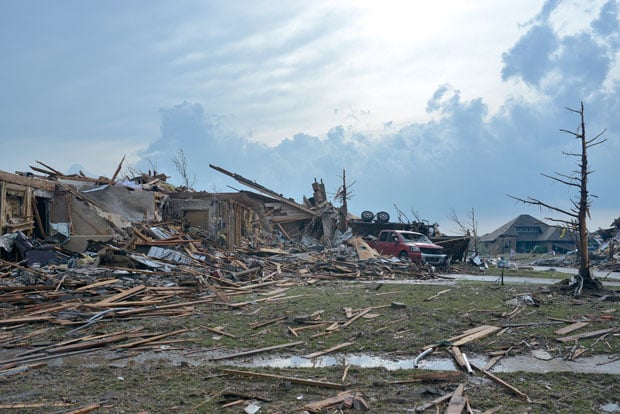 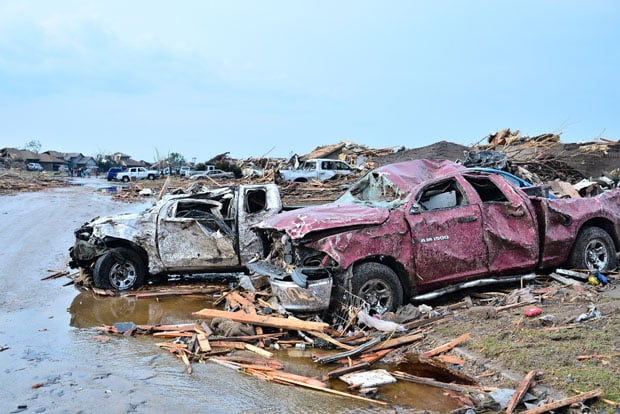 There were many times I had to keep reminding myself to shoot. There was too much to look at and too much to look out for. I tried to focus on the damage, and the people interacting with it. I was using a prime lens, so there was no way I could get personal with my images with the rules I had set for myself. 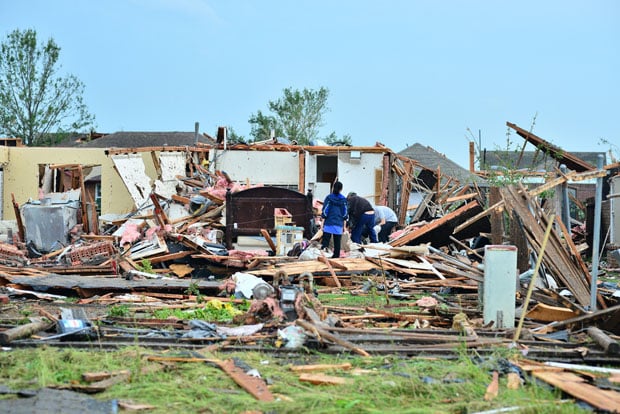 The families there were in good spirits. I had arrived after people had gotten rushed to hospitals, so I did not see anyone hurt. I asked many times if anyone needed a hand and was turned down every time. 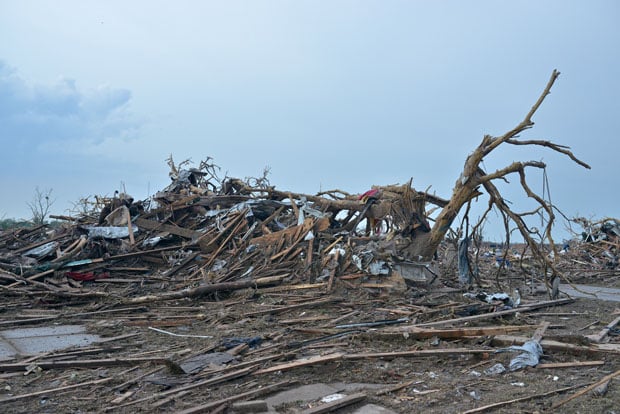 I saw people ditching their beers as cops came up to help, elders in folding chairs on the porch in front of their frayed homes, people going through their homes and finding their pets, fire and police officers helping families. 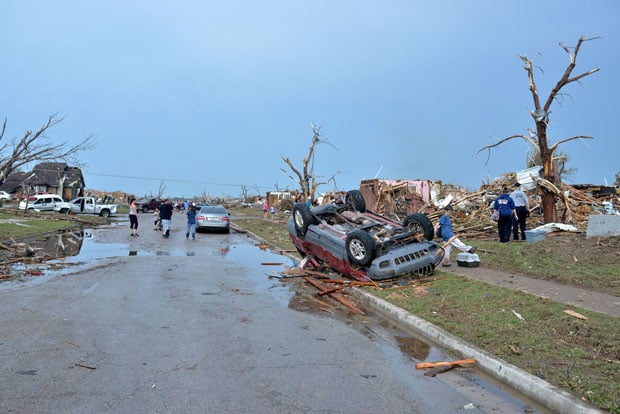 I made my way around the neighborhoods, I saw a lot of people helping people. They were even turning away volunteers and only accepting specialists. As strange as I thought that was, I found out later that looting was occurring. 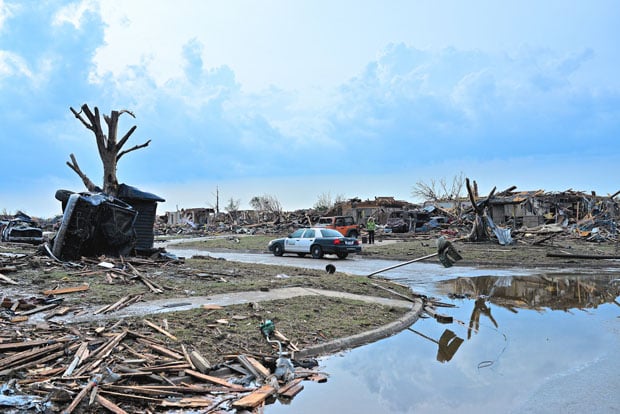 As I made my rounds, there were many times I wanted to jump in and start digging for the animals I could hear crying. There were so many. There were so many poor dogs that were wounded and hurt. I thought to myself, “What would I do with them? I’m 3 miles from my car, and all I have is my camera. Where would I take them?” I had no idea. I was not equipped for anything like that. My heart was heavy, but it was time for me to leave.

As I was leaving, more and more people were showing up to help. Animal control personnel were placing dogs into their trucks as fast as people were bringing them.

I ran into people set up outside the perimeter with small first aid kits helping anyone coming out of the area. People with water and flashlights were flowing in as fast as they could walk. It made me proud to see our community coming together for one another.

I got back to my car about 45 minutes later. I was exhausted and dehydrated, but I had a memory card full of photos showing what the tornado did to this community.

About the author: Mat Miller is a photographer based on Oklahoma and the owner of 1984 Studios.