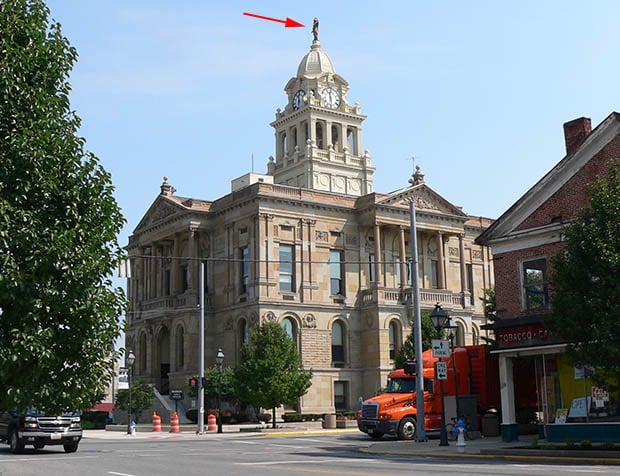 If you ever try your hand at shooting photos or videos from the sky using a remote-controlled helicopter, do your best to avoid trees, tall buildings, and… statues. Ohio-based cameraman Terry Cline found out the dangers of statues the hard way this past weekend. While capturing aerial imagery, Cline got his flying camera stuck in the arms of a statue 100 feet above the ground.

Holly Zachariah of The Columbus Dispatch reports that Cline had been capturing promotional imagery of the Marion County Courthouse in Marion, Ohio this past Saturday at around 8pm when a gust of wind blew the aircraft directly into the arms of Lady Justice — the statue located at the very tip of the courthouse’s dome.

Cline was using the $1,500 photo- and video-capable chopper to capture imagery for his company, Challenge Productions.

Columbus Dispatch photographer Jonathan Quilter was sent to the scene, and was able to capture a photo showing Lady Justice clutching the camera rig in her arms (see the photograph here):

As if the embarrassment of losing a camera to an inanimate statue wasn’t enough, a new problem arose: no one had a good idea for how to take the camera back from Lady Justice.

County officials are refusing to pay for a large crane to extract the camera, and they’re unwilling to have someone lowered from a real helicopter (that’s what Cline actually suggested). It would also be very difficult to climb up from below, as the bell tower structure is constructed mainly of wire.

“It looks like we’re gonna leave it up there,” county official Ken Stiverson is quoted as saying.

So for now, visitors to the seat of the county’s government will be greeted by a statue that has a scale in her left hand, a sword in her right hand, and a camera cradled in her arms.

Update on May 5, 2013: The camera has been retrieved from the arms of Lady Justice:

After a week of back-and-forth about who was responsible for retrieving the device, how it could be done and how much it would cost, it took nothing more than a man hanging out of a window with a long pole to fetch the 2-pound, 9-inch device, which is equipped with a camera and cost $1,500.

Update on 4/6/17: Here’s more information about what helicopters were used.

Thanks for sending in the tip, Josh!