Want to see a tree grow up before your very eyes? Sonoma County, California resident YouTube user Lapeere created this neat video that squeezes five years in the life of his backyard tree into a one-minute-long time-lapse video.

Lapeere took about one photograph a week over the course of the five years. To keep the framing the same through the shots, he pressed his 3.3-megapixel Olympus 3030 point-and-shoot in a specific spot on his air conditioner, between a screw and an edge of the AC unit. This allowed the shots to be from an identical viewpoint throughout the whole video. 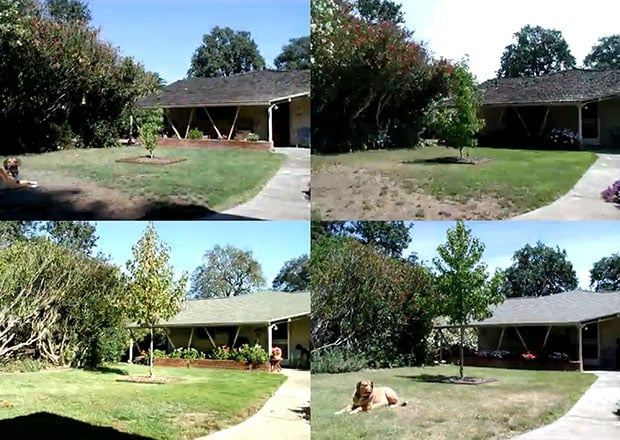 The main dog in the photographs was named Sara. She unfortunately died in 2012, a few years after this video was released in 2009. “She new when it was time to take my pictures and always ran outside to pose. I’m glad I﻿ kept her in the pictures and didn’t shoo her away,” Lapeere says.

Lapeere also says that the video documents not just the life of that tree in his yard, but his personal life as well:

I do not consider myself an arborist as much as I consider myself a historian. I try to capture the steady flow of events that effected my life. When my in-laws lived in the house pictured, they had a passion for the yard. In later pictures after my divorce, not in the video, the yard doesn’t look so good. The tree﻿ still grows, but so does the grass.

This video captures the struggle my in-laws had keeping the lawn healthy when we had a dog that loved to lay in the same place all the time.

Lapeere has been faithfully snapping these time-lapse photos for over a decade now, and says he has gone through three digital cameras in the process. Now that’s dedication.

Do Hashtags Transform a Photo Into More Than Just a Photo?