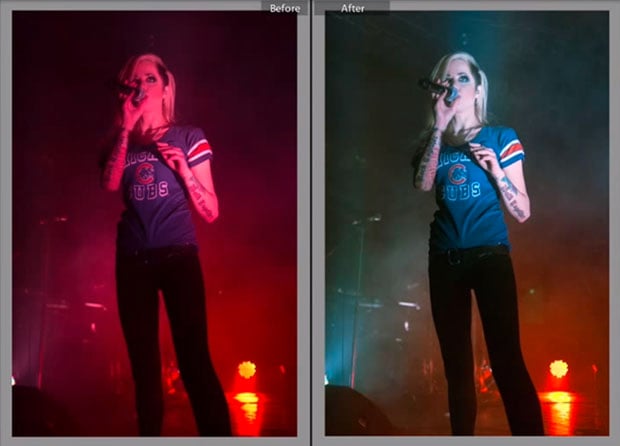 After posting a before-and-after of a concert photo she had taken and edited in Lightroom, photographer Kohl Murdock received several requests to post a tutorial on how exactly she edited it.

The photograph was taken at a Shiny Toy Guns concert and is a great straight on portrait of lead singer Carah Faye Charnow with the exception of the massive amount of red fill light plaguing the snap. This is a common problem with concert photos, and so we’re as glad as everyone else that Murdoch obliged and created the tutorial.


The final product was produced by messing with tint, temperature, exposure, saturation, contrast and doing quite a bit of work with her highlights and shadows in split toning. Obviously, there’s more to it than just knowing what values to adjust, so if you wanna try your hand at it, check out the video and give it a shot.

You’ll have to ignore Murdoch’s apologies at not being a good enough teacher, as she does a great job explaining/showing you how to take care of that fill light and then some. If you want to see more of Murdoch’s photography, concert and otherwise, head over to her website by clicking here.