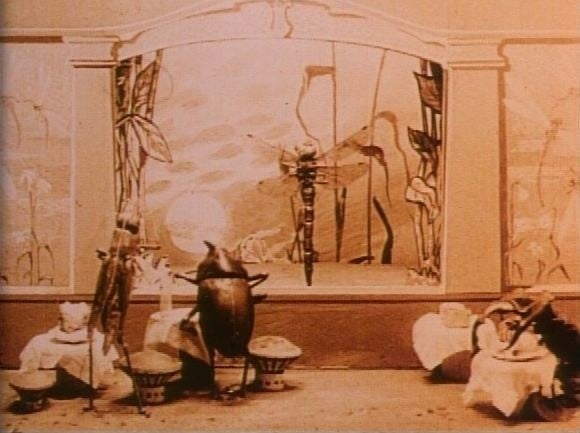 Stop motion animation was already being used in the late 1890’s as a way to make objects in films move by “magic,” but full stop-motion animated films like the ones of today didn’t come to be until around 1910. When they did, one of the great pioneers of the technique was Russian photographer and entomologist Wladyslaw Starewicz.

A lover of bugs, he famously used the critters to animate elaborate stop motion films, some of which are still considered among the best of all time. Of those films, The Cameraman’s Revenge is probably his most famous; a stop motion masterpiece featuring husband and wife beetles and their experiments with infidelity.

The quality of the animation is incredible, especially when you consider that it was filmed in 1912:

Other famous films animated by Mr. Starewicz include The Beautiful Leukanida, The Grasshopper and the Ant, and The Tale of the Fox; the second of those got him decorated by the Czar, and the third is said to have inspired Wes Anderson to make his Fantastic Mr. Fox.

To see more of Starewicz’s work, just type his name into YouTube and enjoy. For movies shot in the early 1910’s, we think you’ll be pleasantly surprised.

NPPA Joins Fifteen Others in Copyright Suit Against Google Books