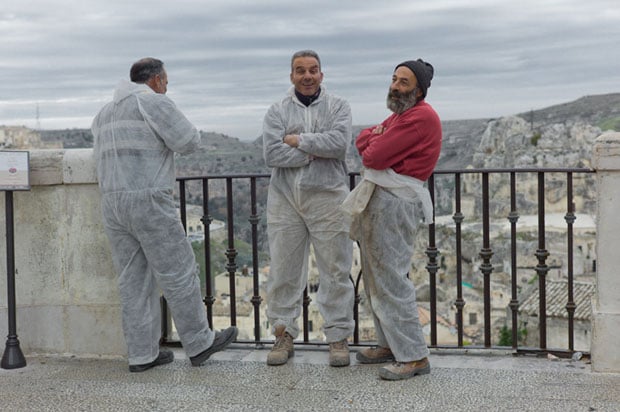 Photographing strangers can be a daunting proposition. It was one of the focuses of the workshops I held in NYC this past summer. What if they get mad, what if they yell at me, or what if they go completely psycho on me? Odds are, most people will simply say no pictures. Even the school of Bruce Gilden photographers have hardly been bothered with their “mugging style portrait.”


For all the threats I read on websites, no one has punched out Charlie Kirk or Eric Kim. Keyboard warriors are much more violent than the real thing. This is not to say there are some certifiable lunatics out there, but the odds are pretty slim that someone will do anything more than turn away or say “don’t take my picture.”

What do you do if there is a picture you would like to take, but the person does not want to allow it? Ask yourself these questions:

If you answered no to any of those three questions, I would not take the picture.

How to Overcome the Fear of Photographing Strangers

When a photographer says to me that they have trouble shooting strangers, the first thing I look at is how they interact with other people. Most photographers who say they struggle with the confidence to shoot people don’t actually have a photography problem. They usually have a people problem.

The idea of talking to strangers is the bigger issue. If we want to get really psycho-analytical, the fact that they are considered “strangers” and not “people” is probably a bigger problem.

If talking to a new person is a tough, then photographing them will be even tougher. It leads to foolish ideas like hip shooting and 400mm lenses on the sidewalk. If you see someone doing this tell them, “Don’t be a pervert or a creep… it gives the rest of us a bad name.”

Photography, for better or worse, is a male dominated field (I would argue for worse). One (of the many) lesson that men can learn from women is how to approach people.

Men can learn a lot from this.

During my recent NYC workshop, three of the female participants walked by an older gentleman sitting on a bench in Nolita. As they lifted their cameras he said, “Don’t take my picture!” It was the beginning and end of that shoot. I was walking a few steps behind them. Sitting next to the gentleman was a young woman who was was just getting up.

When he saw my camera he told me, “No pictures for you either.”

We struck up a simple conversation. I asked him where he was from, he asked me if I was from the C.I.A.? He revealed that he grew up in Paterson New Jersey, I confessed, much to his disappointment, that I was not in the C.I.A. but rather the Secret Service. The obvious lie broke the ice and we started talking about Paterson, which has a very interesting building history.

Paterson, New Jersey, the birth place of my grandfather, used to be the stain glass, tin, and brick making hub for New York City. Almost all of the tin stamped ceilings you see in SoHo lofts came out of Paterson. Also, many of the older residential buildings in the city are made from the sand of the Passaic River that cuts through Paterson. Bricks used to come in endless shapes and sizes that architects and masons would specify for project. Paterson used to be a serious place for manufacturing but fell on to hard times after WWII.

Richard was surprised by my interest in the city and we spent the next ten minutes exchanging stories about Paterson and New York. At the end of our conversation I said, “So what about that portrait?”

Richard gave me his address and the rest is history. While he started off by saying “No pictures,” what he really meant was that he did not want to be passing fodor for a bunch of photographers. But if I was willing to chat with him, he would be willing to sit for me.

People don’t want to feel like a piece of meat. The hit and run style of street shooting leaves people with a bad taste in their mouth. It gives off the impression that you really are taking something from them, instead of having a meaningful exchange.

If you are going to take their picture, spend a little time getting to know them. All too often, I see photographers hurry through scenes only to come out the other end with images that feel like they were taken in passing.

The next time you are out shooting, if you are not already in the habit of meeting someone new, strike up a conversation with a new face. It could be a taxi driver or security guard or a random guy on a bench.

When mom told us not to talk to strangers she only wanted to protect us. But as photographers, the more strangers we talk to the better. Because eventually they stop being strangers and just become people other than ourselves.

The barrier that exists between two people is only an illusion. Once it is removed, the worlds mix and we discover that even in the most remote places, humans are more alike than we might like to admit.

About the author: Adam Marelli is an artist, photographer, and builder who lives in New York City. He holds popular photography workshops year-round around the world. Visit his website here. This article originally appeared here.