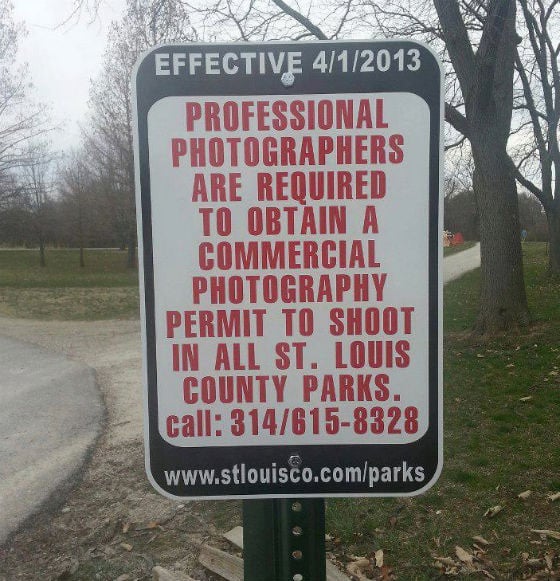 Officials over in St. Louis, Missouri are embarrassed and have a bit of explaining to do after it was discovered that a sign banning permit-less professional photography in county parks had been put up “by mistake.”

The controversy started after earlier this week when a Reddit user named SYGAC spotted, snapped, and shared the above photograph inside a St. Louis County park. The sign reads:

Professional photographers are required to obtain a commercial photography permit to shoot in all St. Louis County parks.

The sign states that the new rule went into effect on April 1st, 2013, and offers a phone number for photographers who wish to obtain a permit. The Reddit thread caused quite a bit of discussion, and it appears that a number of concerned photographers contacted city officials asking about the ban.

Some people thought it was an April Fools’ Day joke, but a quick call to the number revealed that it was no so. Leisa Zigman over at KSDK reports that the permits were being sold for $50 per shoot for $200 for a year of shooting, and that there was a $1 million liability coverage requirement that jumped up to $2 million if the photographer wished to photograph pets.

However, after some investigation, it soon came to light that there is currently no county ordinance behind the sign. A county spokesperson revealed that the parks director should never have put up the sign in the first place, and the sign was quickly taken down. 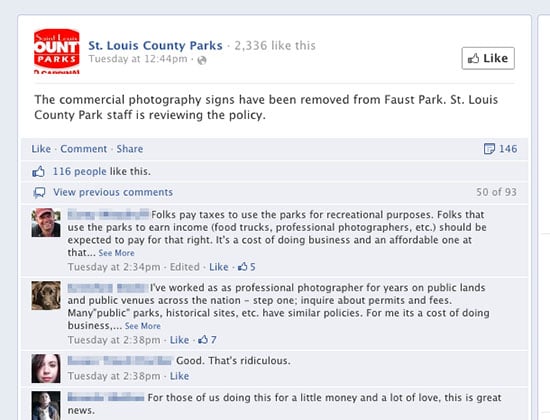 If you’re a St. Louis photographer cheering this latest development, you might want to hold back on your celebrations. County parks department director Tom Ott says that although there is no new policy change and that the sign were put up by mistake, a potential rule change is currently under review. If that rule change does go through, the sign may find itself back in its place before long.